Vestiges of the past at Yam O and Luk Keng Tsuen 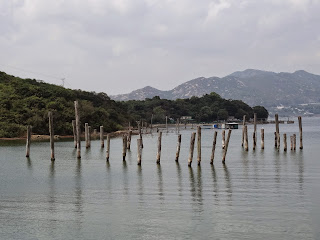 On the way to and from Hong Kong International Airport,
I've passed by Yam O and resolved to visit one of these days 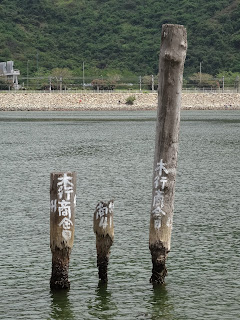 And yes, I wanted to take a closer look at
the logs sticking out of the water 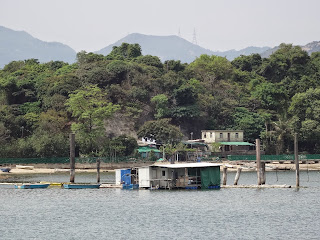 ...and also Luk Keng Tsuen, the village located by the bay

Even before I moved to Hong Kong more than eight years ago now, I've been intrigued by Yam O. Mind you, it wasn't until after I moved to the Big Lychee that I knew the name of the area -- and it was only recently that I learnt that the forlorn-looking logs that caught my eye on my trips from and to Hong Kong International Airport are the remnants of a vast "log pond" in use by a lumber mill located at Luk Keng Tsuen.
An area frequented by shutterbugs and fishing enthusiasts, there also are those who are drawn there by its cultural heritage (as noted in a scene in Dot 2 Dot, Amos Why's love letter to Hong Kong which topped my 2014 Hong Kong movies list): for in addition to Yam O having been the site of pretty substantial lumber operations as late as 1983, Bronze Age and Tang Dynasty artefacts were found by archaeologists at Luk Keng Tsuen in 2007.
However, contemporary visitors will be able to see little evidence of this as, shockingly, the authorities have built barbecue pits on top of the ancient historical site!  And, to be honest, I found Luk Keng Tsuen a largely sad sight when I went there last week; with my distinct impression being that the village -- kaito service to which has been discontinued -- had become not much more than a collection of dilapitated shacks whose residents appeared to be elderly, impoverished or both.  (A couple of old ladies, both of whom must have been at least in their 80s, were the only people I saw when I visited -- and I sincerely hope that the small pieces of salted fish drying under the sun at the now disused public pier isn't their primary source of protein.)
It's not just that Yam O's best days appear far behind it.  It's also that scant respect looks to have been given to the area -- and its residents -- by the authorities.  All in all, the sense I got was that the authorities had pretty much left the place to rot -- with garbage collection appearing to not be close to non existent in the area and the village looking particularly run down when compared to the state of the shiny Sunny Bay MTR station that serves it and also lies on one end of the plush Disneyland Resort Line.

And yet, it's hard to deny that there remains a haunting allure to Yam O which obviously attracts people to check out and, in some cases, hang out the area.  So even while part of me regrets having not visited until recently because the area -- including its remaining logs -- looked to have become more worn with each passing day, week and year, another part of me is glad that I did finally visit -- if nothing else than to satisfy my curiosity about the place and get a closer view with my own eyes.
Posted by YTSL at 11:46 PM