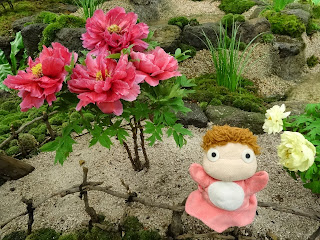 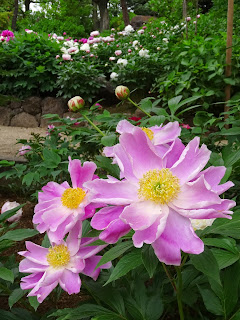 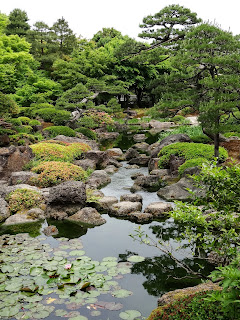 Of course, as I've come to expect of Japanese gardens,
there are lovely views to be had 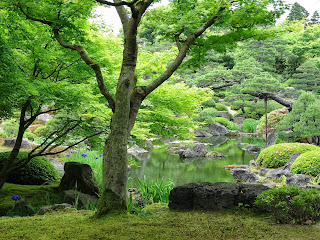 Yuushien's the kind of place where I like to linger for a while
to enjoy the calming as well as pretty sights :)

As some of this blog's readers may have gathered, I like to plan my vacations.  At the same time, I don't strictly stick to the itineraries I make.  For example, I had hoped to hike from Iwami Ginzan's main (mining) area to one of the two port towns that the silver had been transported to and, from there, to the rest of the world.  But the copious number of "beware of snakes" -- and in some cases, "beware of wasps too" -- signs that I saw the day that I went there caused me to abandon my idea to go along the (also noticeably overgrown) old transport routes between the mining area and the coast! and this especially since I additionally observed way fewer visitors about than I thought there'd be at

Opting for something tamer the morning after my excursion to Iwami Ginzan, I decided to head out from Matsue once more; this time to Daikonshima (Radish Island!) to spend some time strolling around Yuushien, a Japanese "circuit style" garden famed for its peonies -- some of which were in bloom when I visited.  And although the weather forecast had been for a largely cloudy day, it was beautifully sunny for much of the time that I was there -- something which added considerably to my appreciation of the place!

A small volcanic island located on Nakaumi (a brackish lake that is Japan's fifth largest), Daikonshima appears to be a giant plant nursery -- and is famed for being where prized ginseng as well as peonies (Shimane's prefectural flower) grow.  Near the entrance of Yuushien, women offer up free cups of ginseng tea and in the facility's main buildings, there are exhibits on ginseng and areas where one can buy all kinds of ginseng products.

But my focus was on the garden's flowers and landscaped areas -- which I had a lovely time checking out.  For although I hadn't quite realized it when reading its brochures and such, Yuushien's actually my favorite type of Japanese garden: i.e., those designed for strolling around and revealing different vistas as one does so.  And while it's neither as old nor large as the likes of Okayama's Korakuen and Kanazawa's Kenroku-en, it still struck me as pretty lovely and impressive!

The morning that I was there, there were lots of senior citizens enjoying the garden's offerings.  Some of them were wheelchair-bound while others could get about pretty well on their own two feet.  Close to all of them, male and female, had floppy hats on to ward off the sun -- something I've come to see as characteristically Japanese! -- and quite a few were snapping photos of the sights and their parties.

At no point though did I see anyone brandish a "selfie" stick.  And I have to say that I hardly saw any on this Japan trip -- unlike the case when I visited South Korea last September or when I'm in more touristy parts of Hong Kong (e.g., the Tsim Sha Tsui waterfront). Actually, the general impression I get is that "selfie" sticks actually aren't that well known or prevalent in Japan.  And yes, I consider this state of affairs adds to Japan's charm! ;b
Posted by YTSL at 6:10 PM

Hi YTSL, how lovely to see Puppet Ponyo in a beautiful setting. I'm also a big fan of Japanese Gardens and try to visit them on my trips. One day I would love to visit Japan to see the ones there.

You're giving Puppet Ponyo a lot of appearances in your photo-essays from this trip. She looks quite elated in the first photo where she introduces the reader into this beautiful garden environment...All of these photos express tranquility and they are worth lingering over.

If you love seeing Puppet Ponyo in a beautiful setting, make sure to come back and visit in the next few days. Have a photo of her from this Japan trip that I think is one of the best I've taken. :)

Hope you make it to Japan one day -- for there really are lots of lovely Japanese gardens (stroll gardens, Zen gardens, etc.) there. :)

My favorite of your Puppet Ponyo photos so far. Somehow she looks much happier in this photo...maybe she likes the color of the flowers next to her as the color is similar to but not the same as her outfit....Also I think this is one of the most lovely Japanese gardens I've seen photos of.

I'm glad you like the Puppet Ponyo photo. I actually thought she looked paler than usual -- probably in contrast to the flowers. ;b

Yuushien's a smaller garden than many others I've been to in other parts of Japan but it most certainly does have its charm. :)

The flowers are gorgeous and as always your posts are so well written.

Thanks for the compliments, and I hope you'll continue to visit this blog even though we both are no longer taking part in the Saturday Photo Hunts! :)