Izumo Taisha - the chief shrine in the province of the gods 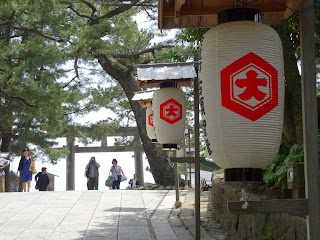 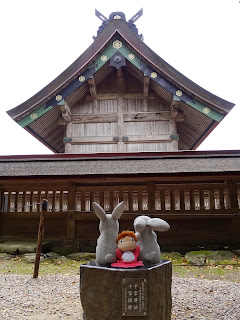 Puppet Ponyo poses with a pair of rabbits (or hares)
who face the Honden (Main Hall), inside which the shrine's
main deity (who's also associated with fertility) is enshrined 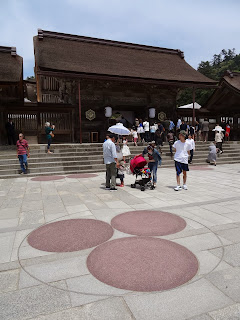 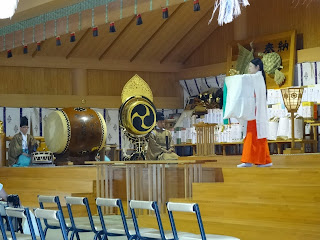 The sound of drumming drew me to a subsidiary building,
where I found a Shinto ceremony taking place

It's rained nearly every day in Hong Kong since I returned from my recent Japan trip, with the one mainly rainless day being this past Monday - Buddha's Birthday, Taoist god Tam Kung's Birthday, and also the Cheung Chau Bun Festival's Piu Sik (Floating Colors) parade which I went and checked out.  And the gods were kind to me too when I visited Izumo Taisha, a large and ancient Shinto shrine where it is believed that all of the gods go and congregate during the tenth month of every lunar year (making it "the month of the gods" in that province but "the month of no gods" in the rest of Japan).

Of all the places close to the Sea of Japan that I planned to visit on my recent vacation, Izumo Taisha appeared to be the best known by far to my Japanese friends (not least due to its sake connections).  Enshrined in its Honden (Main Hall) is the kami (god) known variously known as O-Kuni-Nushi-no-Kami, Okuninoshi, Daikoku and Daikoku-Ten.  The Shinto deity of abundance, medicine and luck, he's also associated with happy marriages and -- as can be attested to by the high number of kawaii (and also rather kitschy!) rabbit/hare figures in the shrine's grounds -- fertility.

Visitors are generally not allowed into the Honden and, instead, must content themselves with viewing what can be seen above and through its two sets of fences.  Happily, however, there are ample other sights to see in the shrine's spacious grounds, which include other impressive buildings, giant torii (gates), statues of Okuninoshi, many rabbit figurines, and more.  There's even a lovely pond where koi and turtles swim, and on the banks of which flowers bloom -- and, to the side of one of the giant torii, a statue of a man in military attire that I found rather mysterious on account of it not having been marked or mentioned in the complimentary guide to the shrine and area map that I was given at the local tourist information office.

What with it being the second least populous prefecture in Japan, Shimane Prefecture is these days looked upon as regional backwater -- with its capital city, Matsue, being the smallest city that I've used as a base while visiting the country that many Westerners think of as being super high density but I'm often find to be on the quiet and uncrowded side relative to Hong Kong.  But it, particularly the old Izumo province part of Shimane, has a major place in Japan's mythology and history -- prompting Lafcadio Hearne to label it "the province of the gods".

Days before I visited, the Daisairei (Grand Annual Festival) took place at Izumo Taisha.  For three days every year, official messengers from the Japanese emperor bring offerings to the shrine and convey his prayers.  But although I missed what I'm sure were occasions of great pageantry, I'm not upset.  After all, the day that I visited, I came across at least one happy wedding party (who posed for formal photos in front of the shrine's Kaguraden (Sacred Dance Hall), where reputedly the largest Shimenawa (sacred Shinto straw rope) is to be found), a few proud mothers carrying their precious babies to be blessed at the shrine and also one Shinto ceremony that involved impressive drumming and stately moves by religious functionaries! :)
Posted by YTSL at 11:19 PM

Thanks for this photo-essay glimpse into a Shinto shrine "in the province of the gods."

In a great classic pose with rabbits, Ponyo proudly introduces one to the exterior of the Honden.

Not just a Shinto shrine but *the* Shinto shrine in the province of the gods! And I think Puppet Ponyo was actually more fascinated by the rabbits than the Honden -- naughty? ;b