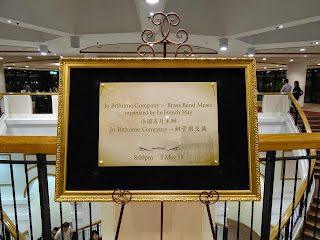 A conservative looking sign for what turned out to be
a "come on, stand up and dance" concert :b

For the first 45 minutes or so of the concert featuring the brass band music of the Jo Bithume Company, the audience stayed in their seats; this despite one of the musicians -- flautist, trombonist, vocalist conductor and worker of the machines producing electronic beats Elisabeth Herault -- leaping off the stage and personally inviting a couple of people sitting in the front row to get to their feet.


It wasn't that the rhythmic music wasn't good.  It's just that I'd wager that the audience attending the concert at the Hong Kong Polytechnic University's Jockey Club Auditorium was on the shy side compared to those in the west that the French company probably are more familiar with!  And I, for one, started feeling very conscious of the fact that I, too, happened to be seated in the front row and nervous that I may be the next person that was going to be invited to shake her booty in front of hundreds of people (something that happened decades ago in Tanzania -- and is something I don't particular want to repeat!)!


At the same time though, the music produced by Herault and her fellow musicians (trombonist Alain Lardeux (AKA Bopchon), trumpet players Jacques Douvet and Aurelien Joyau, saxophonists Frederique Espinasse, Emannuelle Rualt and Alexandra Bourigalt, tuba player Kevin Thiebot and bass guitarist Pierre-Yves Sourice) was so pulsating and mesmerizing that it was well nigh impossible to stop one's feet and fingers tapping at minimum.  And after Herault issued a general invitation about midway through the concert to people to feel free to go to the front and dance in the space between the stage and first row of seats, a few audience members -- led by Le French May staffers -- decided to go and do just that!


At the risk of sounding like a killjoy, I must admit that I would have preferred for there not to be a row of people in front of me blocking the view -- especially since the tall woman directly in front of me ended up standing still rather than actually bopping about most of the time!  This is because even while the primary sense used at concerts is hearing, I do often enjoy watching the musicians go about producing the sounds they do too -- and several members of the Jo Bithune Company appear to be into visually entertaining as well as making cool music. (I found Herault and Lardeux -- who, probably not coincidentally, are the Jo Bithume Company's musical directors -- particularly expressive and fun to watch.)


Still, it's also true enough that the musicians did seem genuinely delighted to have managed to get some members of the audience out of their seats and on their feet.  And the last two musical sets produced a heartwarming response from some of the younger members of the audience -- including a few teenagers clad in their school uniforms -- who enthusiastically accepted  the invitation by the musicians to not only to get up and dance in the auditorium where the concert was being held but also go up and join them on stage for a bit.

Music-wise, this was a pretty enjoyable concert.  Experience-wise, it turned out to be joyously entertaining -- thanks in large part to the musicians on stage (who boogied as well as made music, and appeared to be really enjoying themselves)  but also the exuberant youth who turned a couple of encores into a demonstration that music can help at least some -- even if not all! -- people let go of  their inhibitions for a time. :)
Posted by YTSL at 11:36 PM