Beyond sushi on the San-in Coast 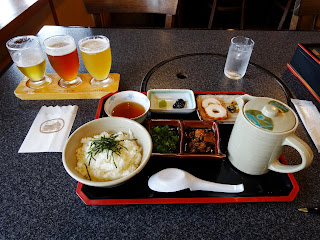 Not the kind of lunch one'd expect to eat at a craft beer place, right? 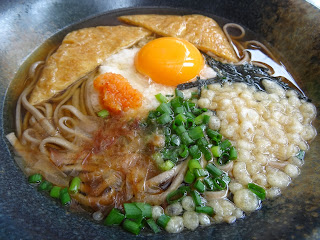 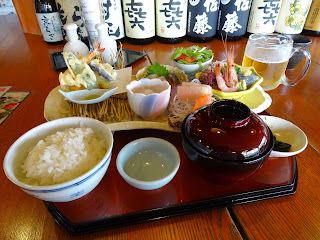 A delicious set lunch in Matsue 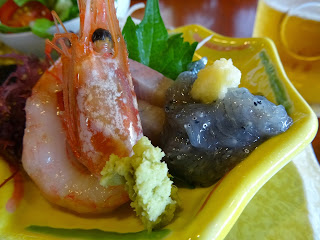 A closeup shot of the gray pile next to the prawn
-- and yes, there are a lot of EYES in it! ;O

Whenever I think back about my holidays in Japan, meals are very much a part of the good memories of my visits to the Land of the Rising Sun. Indeed, I'd go as far as to say that I've yet to have a bad meal while in Japan -- though, sadly, it's also true enough that I may have had one of my least satisfying meals in the country on this recent Japan trip... and it was at a sushi-ya too!

What appears to have happened is that the sushi chef-owner at the one man -- and very traditional looking -- sushi joint in Matsue that I decided to try out one evening couldn't believe that a foreigner who wasn't fluent in Japanese could actually be familiar with and really love sushi.  So when I asked for an omakase (i.e., chef's choice) meal, he started the dinner off with foreigner-friendly -- but, frankly, rather dull to my mind -- choices like salmon.

And although about two-thirds through the meal, the chef got to realizing -- thanks to a friendly fellow regular customer who helpfully acted as our interpreter -- that I wasn't a sushi novice (because I told them that my favorite sushi toppings were kani miso (sometimes translated as crab innards and other times as crab sperm), uni (sea urchin...gonads) and ikura (salmon roe)), and started offering up more interesting options like mackerel roe, it felt like a little too late -- alas!

Happily, pretty much all of the rest of the meals I had on this trip were more enjoyable -- including the first lunch I had after arriving in Matsue.  In truth, I wasn't expecting much of the food at Ji Beer Kan since the main draw there was, as the establishment's name makes evident, the jibiru (craft beer).  But the set meal option which included various pickles, slices of chikuwa (fish meat stick) and ochazuke (rice with green tea) really hit the spot along with the Beer Hearn sampler (of pilsner, amber ale and weissbier) that was the first thing on the menu that I ordered!

The next day's lunch at an eatery near the Adachi Museum of Art consisted of warigo soba -- a cold noodle dish that I became eminently familiar with over the course of my stay on the San-in Coast thanks to the hotel that I was at (the Dormy Inn Express Matsue) offering it daily as part of the breakfast buffet that had been included in my room booking.  While tasty, I have to admit to thinking I've had enough of this dish, so that I may now want to have any more soba for the next six months!  But it's also was the case that the bowl of hot soba -- topped with such as an egg, pieces of sweet tofu, a portion of mountain yam, thin strips of seaweed and spring onions --  I had at a roadside stall in Iwami Ginzan was nicely comforting; particularly since that day turned out to be on the unexpectedly cool side temperature-wise.

And the day after I had the unsatisfying sushi dinner, I had a lovely lunch at Kyoragi, a restaurant located across the road from Ji Beer Kan.  Like the majority of the eateries I ate at on this less visited part of Japan, it didn't have an English menu.  But it had a really helpful picture menu -- and I felt pretty safe in knowing that I had ordered the sashimi and tempura set; with the only surprise turning out to be the pile of tiny -- and gloopy textured! -- fish that was placed next to a large prawn.  And yes, even though their gray color and (relatively) big eyes reminded me of O-totoro, I ate them anyway! (Sorry!!) ;b
Posted by YTSL at 5:52 PM