In what can seem like another lifetime, I was a tourism planner whose job involved meeting with government officials and telling them what getting the area where I worked on the UNESCO World Heritage list would mean.  I remember being shocked and horrified by one senior government official ignorantly asking if getting on the list really would have much impact -- and recalled our discussion as I made my way to Iwami Ginzan (by train and then bus from Matsue, as had been the case the previous day for the Adachi Museum of Art).

For the fact of the matter is that I wouldn't have known of the existence of this historically important silver mine and its distinctive cultural landscape -- which includes a small town with roots back into the Edo period (Omori) where, unusually, samurai, merchants and craftsmen (and their families) would live on the same street rather than in separate neighborhoods -- if not for it having been inscribed on the UNESCO World Heritage list in 2007; this despite this one mining area being said to have supplied one third of the world's silver in the 16th century.

Beginning from 1526, silver was extracted at Iwami Ginzan for close to 400 years.  Despite all this mining taking place and such as mountain fortresses to protect the silver as well as mining towns being built in the area, today it is largely wooded -- thanks to forestry management that, in the past, ensured a steady supply of the vast amount of timber used for fuel when refining the silver and such.

While no visit to this site could possibly be considered complete without going down a mine shaft, it's also very much part of the experience to make the hike through the woods to one of the two mine shafts that are open to the public -- and also to check out the other human-created sections of what feels these days like a most bucolic area... 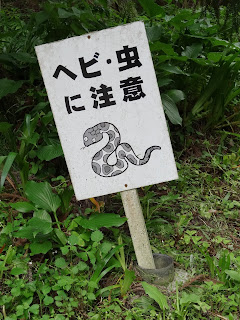 On my woodland trek, I expected to have my third
Japanese snake spotting (after ones in Ogimachi and Bitchu-Takahashi)
-- especially after seeing signs like that pictured above! :O 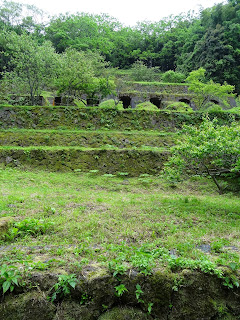 The Shimizudani Refinery Ruins got me thinking
of the Roman ruins I saw in Trier last year ;b 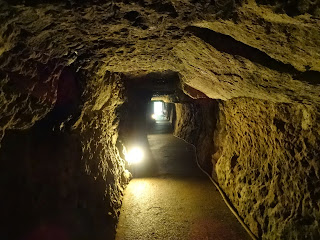 Inside the Ryugenji Mabu Mine Shaft which dates back to 1715 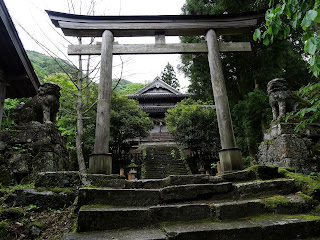 Dedicated to Kanayamahiko-no-mikoto, the god of metal refining,
Sahimeyama-jinja is one of Japan's largest mountain shrines
-- and completely (and eerily) deserted when I visited! 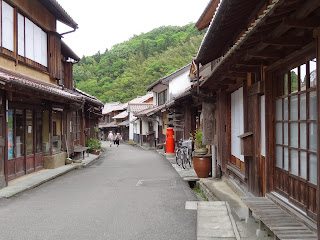 The town of Omori's so picturesque it can look like
it's part of a historical theme park rather than a place
where people still live and work! 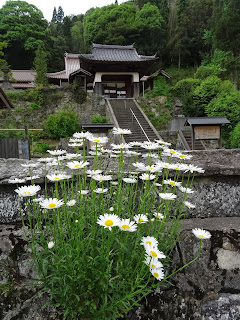 Eisen-ji's one of a number of Buddhist temples and
Shinto shrines to be found in Omori (and yes, there also
are many places where flowers grow within the town) It's hardly the largest or most historic building in Omori but I like
how this house looks, with its pretty lace curtains and unpainted wood 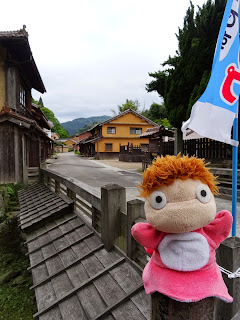 Puppet Ponyo by one of the wooden bridges to be found
in this town that comes across as an attractive place
to live in, bar for its distance from other human settlements! ;b
Posted by YTSL at 10:11 PM

Your photos and text depict a vivid experience in a country whose scenic, historical, and cultural depth seem to increase the more I read of your travel blogs and click related links.

The fourth photo from the top of Sahimeyama-jinja, gives the impression of a secluded somewhat forbidden kingdom...Omori's wooden houses have a lot of character, especially the one in the second photo from the bottom.

The bottom photo of Ponyo (she appears a little tired, perhaps from touring) concludes this glimpse into a place which seems distant from the contemporary world.

Hi YTSL, I enjoyed this photo essay and learning about this areas history. So interesting to learn about the silver mine and very cool seeing the mine shaft.

And I love seeing Puppet Ponyo here on the bridge.

The more I see of Japan, the more I realize how much there is to see and experience -- and also how geographically, etc. diverse it is.

Another thing is that while a lot of visitors comment on how futuristic Japan seems, I tend to notice more and more the parts of it that look like they're still connected to eras past. I think this has to do with my having visited more rural parts of Japan and smaller towns and cities than most visitors to the country.

At the same time, these places often get me thinking of places in Studio Ghibli movies, e.g., "My Neighbor Totoro". So Puppet Ponyo -- who does appear a bit wrinkled and disheveled in that photo due to fatigue -- seems really at home there. ;)

I'm glad you got stuff out of this photo-essay and the accompanying text. And I'm very aware that Puppet Ponyo has her fans among this blog's visitors. :)

Wonderful photos. Love the beware of snakes warning. I once bailed on a hike in the desert near T's because of a smiliar sign....rattlesnake mating season a local told me. Love the textures and shades of tan, brown, etc on the house and the lace curtains...."are the frosting on the cake".

Did I ever tell you that I had a rattlesnake glide over my foot while I was doing archaeology in Colorado? Am so glad it wasn't the other way round -- as in me stepping on the snake. Otherwise, I may not be here to write this!

And I'm happy that you (and Bill too) like the look of that house in Omori that caught my eye. :)