Delicious oden -- and more! -- at Takoume 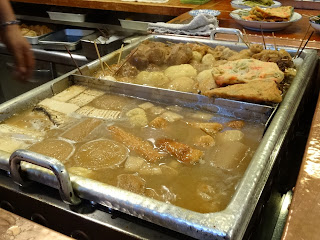 What's simmering in those vats? 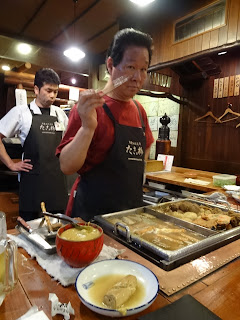 Does the food look more intimidating or the cook? ;b

All too soon, it was time to bid "sayonara" to Matsue and the rest of the San-in coast -- including sandy Totorri, UNESCO World Heritage-listed Iwami Ginzan, and the province of the gods that's Izumo -- about which I now have fond memories.  Three train rides later, I was in the now familiar territory of Osaka, a city I've come to love for the great food (and beer!) that's on offer!

Rather than sightsee, I elected to focus on shopping (for more English language books about Japan to add to my collection!), eating and drinking during my overnight stay in Japan's second largest city.  And while I was happy enough to do my book shopping at a Books Kinokuniya branch close to my hotel (and Osaka Station), I felt Dotonbori call once again to me as far as purveyors of food were concerned -- with visits to Osaka these days feeling incomplete without a pilgrimage to the Mecca of kushiage that's Daruma!

After inhaling several -- more than five but less than ten! -- tasty sticks of deep-fried decadence at the main Daruma branch that's located right on Dotonbori, I did some walking up and down the gastronomic street -- over the course of which I spotted a traditional looking eatery whose frontage I previously had photographed (see the fourth picture from the top here) but that I hadn't entered.  I had a feeling that it was a restaurant whose food I'd like.  But I nonetheless had to work up the courage to check it out because, among other things, it didn't have any signs in English (not even one showing its name) outside.

Upon sliding open its main door, I beheld a rustic looking establishment -- with pride of place being given to large vats of bubbling liquid, in which (semi-)floated chunks of interesting-looking ingredients.  "Oden?" I asked the intimidating-appearing fellow manning the vats, and was beckoned to a seat at the counter area overlooking the vats.

After looking around and trying to make myself comfortable, I told him "nama birru, kudasai" (draft beer please) -- which got a smile out of him and a feeling that the ice had been broken, something that was confirmed when he started recommending a skewer of tako (octopus) to me and I said okay, and I'd also like some daikon (radish).

At some point, it was realized that I'm not Japanese -- whereby an English language menu (with helpful photos) was produced and handed to me.  Perusing it, I saw that this oden restaurant offered quite a number of oden ingredients that seemed unusual to me -- and I decided to try the bamboo shoot and yuba (tofu skin) but steered clear of all the portions of whale that were simmering in the same broth!

In addition, the more I chatted with the cook, the more I realized that: for one thing, his English was pretty good; and for another, he was quite the funny and jovial fellow -- with the fun moving up several notches when two young South Korean women came into the restaurant, sat near me and got to ordering up a storm!  Soon, not only were we chatting to one another but the friendly cook -- who told us things like he's dark-skinned because he's from Kyushu! -- ended up making origami puppies from our chopstick wrappers for each of us!!

The more I stayed at the restaurant (which is named -- I found out via a business card I was given! -- Takoume and is more than 170 years old), the more I wished that I could eat more there.  Like Daruma, the food was delicious.  What's more, Takoume's atmosphere definitely has Daruma's beat since this oden place was warm and welcoming, the kind of eatery where one is encouraged to linger, whereas the kushiage place can seem conveyor belt-like, with people eating at a much more rapid pace.

So...while I still don't think I'll be able to resist paying a visit to Daruma whenever I'm in Osaka (the food is sooooo good; why isn't kushiage popular in Hong Kong the way sushi and yakitori are?!), Takoume's earned a place in my heart and is another Osaka dining establishment that I'm going to have to make a point to return to eat at! ;b
Posted by YTSL at 1:46 AM

I like this photo-essay because it illustrates how a traveler, if they get a little adventurous, manages a local non-touristy experience. Now, if that was me, my timidity would have held me back from eating here. Unable to speak the language, just the "intimidating" look of the cook would have conjured fears of a Sonny Chiba-like verbal or physical assault.

Yet you managed to step in and break the ice, befriend the cook and even meet two South Koreans...This photo-essay would make a fine commentary insert in a travel guidebook.

Thanks for appreciating this blog post. BTW, if you look near the bottom left hand corner of the photo of the cook, you'll be able to see the origami puppy he made me... kawaii, neh? ;)