Plenty to see and admire at the Adachi Museum of Art 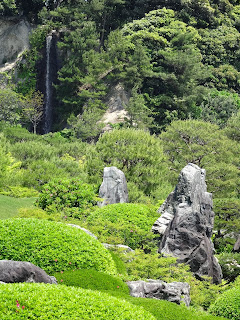 Prepare to be awestruck when you click on the above photo
and view an enlarged version of it! :) 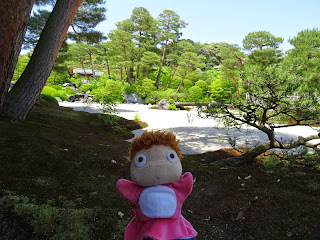 Puppet Ponyo says that you also should feel free to click
on the above photo of her to see a larger version of it (and her)! ;b

Back in 2006, I chanced on an exhibition of works by Yokoyama Taikan when I visited the Fukuoka Art Museum that was by far the most impressive museum exhibition that I viewed that year -- and may well be the most impressive museum exhibition I've seen in Japan to date.  (It's either that or the also pretty breathtaking Tutankhamun and the Golden Age of the Pharoahs special exhibition that was on at the Ueno Royal Museum when I visited Tokyo in 2012.)
So when I found out that the Adachi Museum of Art is home to the largest -- and, many believe, best -- collection of works by the distinguished Japanese artist (whose real name was Sadai Hidemaro), I had one more big incentive to visit this museological institution located on the outskirts of the small Shimane Prefecture city of Yasugi, whose biggest claim to fame is its breathtakingly beautiful Japanese gardens.   And yup, those of you who know me will be able to easily guess what was Shimane Prefecture's top attraction to my mind!

Thus it was that on the morning of my first full day in Shimane Prefecture, I made my way by train, followed by free shuttle bus, to this museological establishment whose layout makes it so that one spends time mainly feasting one's eyes on its six gardens (which are approximately 165,000 square meters in total) first before venturing upstairs to view the major works of art that can be found inside the museum buildings.
Although I had imagined that people would be able to stroll in these amazingly landscaped gardens, the truth of the matter, of course, is that visitors are only allowed to view them from a distance -- and mostly only through the glass of admittedly large windows.  After getting over the disappointment of this discovery, I thanked the stars that at least photographs are allowed of these wondrous gardens -- so I could capture images to remember them by, and share them with others.
On the other hand, no photography is allowed of the interior of the museum and the art works on exhibition.  So I'm glad to have found images online of the pieces I saw there that I ended up spending the most time admiring: namely, Yokoyama Taikan's Mount Fuji (1932) -- which actually is a pair of paintings: one of the snow-covered peak of Mount Fuji peaking out from the clouds and another featuring a reddish-orange sun peaking out from another group of clouds floating above the foothills of the sacred mountain -- and the lesser known Shunkyo Yamamoto's Good Omen (1931), whose azure colors (for the water, flowers and roof tiles) I found striking along with the very idea of a mythical landscape as though it was one which humans could readily visit.
Posted by YTSL at 11:11 PM

An outstanding entry of photos (especially the panorama mode shot) and text of the Adachi Museum of Art which the creators of this museum and gardens must be rightfully proud of. Too bad about the limitation of having to look through glass...

This museum and the Shimane Art Museum might alone justify a trip to Japan...The Adachi Museum website describes the gardens as a "living Japanese painting."...Judging from Ponyo's pose, I'd say she's quite impressed and enthralled with the gardens.

Thanks for appreciating the photos and text!

I am embarassed to say that I actually didn't go to the Shimane Art Museum -- but did go to a number of other museums, including another one whose displays (like with the Adachi Museum of Art's) took my breath away.

And yes, I agree re Puppet Ponyo's reaction to the gardens. I think in the photo, she's telling people (to) "behold!" ;b

Great panoramic shot. And Puppet Ponyo looks like she's saying "Wow" in this photo of her.

Glad you like that panoramic shot. Those gardens at Adachi Museum of Art really are close to being unbelievably beautiful. If I lived close to the museum, I'd go there like once a month just for the gardens!

Yokoyama Taikan! It was only after getting thru a third of the artwork and exhibits that I realized I should have allowed for more than just a couple hours at the museum. Probably could have spent the entire day there without getting bored!

Yokoyama Taikan's works are wonderful, aren't they? Both that artist and the Adachi Museum deserve far more accolades outside of Japan than they have got, I believe. On the other hand, because they haven't yet, my visit to the art museum was not all that crowded and consequently very pleasant indeed... ;b

Not crowded!? We were surrounded by busloads upon busloads of domestic tour group with bus license plates from Kansai! Maybe that's just Koyo season, but the armies of Japanese tourists were out on full force, even on a weekday.

I'm guessing the crowds were in force on account of it being koyo season. Can imagine the gardens being absolutely stunning in the fall! :)