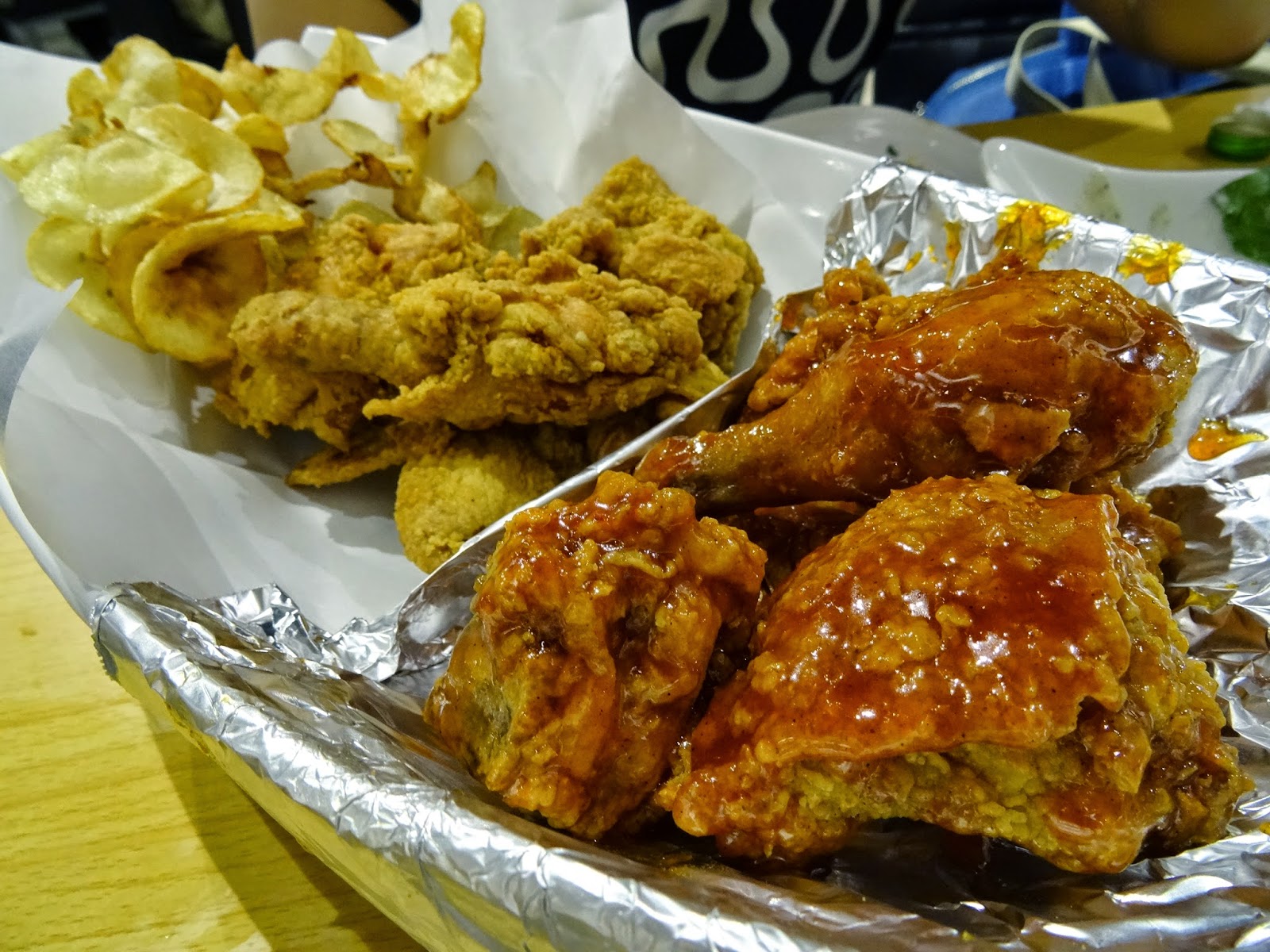 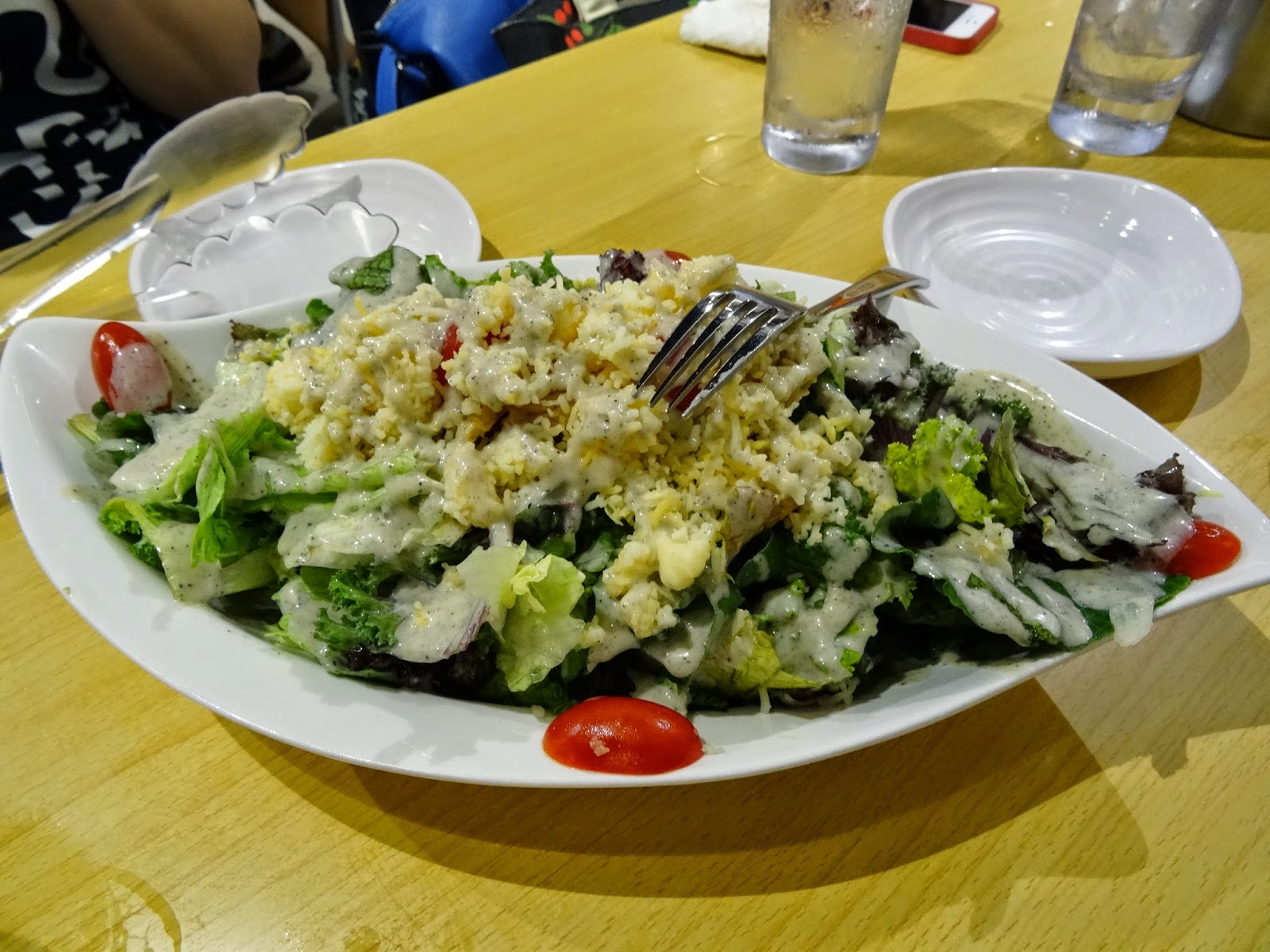 They're so crazy about chicken at Fairyland that
even the mixed salad comes with chunks of chicken
(along with lots of mixed greens)!
For much of my life, KFC has meant Kentucky Fried Chicken and nothing else to me. As a child, eating Kentucky Fried Chicken was one of the treats I looked forward to on visits to Singapore (since back then, no American fast food chain dared to set up shop in Penang -- apparently because they feared that residents of the food capital of Malaysia would be unwilling to pay to eat American fast food when they could eat tasty Penang hawker food at cheaper prices -- even while having established branches in Singapore and Kuala Lumpur).
Almost needless to say, I've also eaten Kentucky Fried Chicken in various parts of the US (though not in Kentucky itself!).  However, I've not eaten any Kentucky Fried Chicken since moving to Hong Kong -- this not least because the branches of that fast food chain here don't serve the sides (of coleslaw, and American-style biscuits) that I had grown to love more than the chicken itself.
Also, as improbable as it may seem to some people, in recent years, KFC truly has come to mean Korean fried chicken to me.  Still, it was only earlier this week that I went and ate at an eatery whose specialty dish it is.
I had originally intended to eat at the Hong Kong branch of South Korea's Fairyland chain some months back but when a friend and I got there at around 7.15pm one Friday, we were informed that the estimated waiting time to get into the restaurant was 1 hour and 45 minutes!  This Wednesday, when another friend, my mother and I got to the area around 6.45pm, we "only" had to wait around half an hour -- hardly ideal but still a lot shorter than the wait would have been at the even more popular Chicken Hof and Soju (AKA Lee's Family Chicken) located a few minutes down the road from Fairyland!!
Although my mother and I were not particularly hungry when we got to the restaurant, we -- together with my friend -- were definitely ready to eat by the time the food we ordered arrived on our table... which was a pretty good thing as the portions we were served were on the mammoth side.  Strange as it may seem, the fried chicken and salad offerings at Fairyland come in only one size: very large -- as in, I can't imagine being able to do them justice if our party had just consisted of two people rather than three.
Happily however, we were allowed to split our order of fried chicken into two different styles -- since my friend had wanted to try the dry fried chicken whereas I was more keen on the chicken slathered with sweet chili sauce.  (And since my mother was okay with both, we all were happy -- and also told her that she could be the judge and tell us whether she preferred the dry fried chicken or one with sweet chili sauce.)  Also, we were given a choice of chicken served with or without bone.  (We opted for the chicken with bone as we were afraid of getting served too much breast meat otherwise.)
When the mega large plate of the Korean fried chicken arrived, it all looked so appetizing that my friend and I decided to try both the dry and wet styles.  As it turned out, all three of us decided that we preferred the sweet chili sauce version as the dry version was, well, on the dry side.  But we liked both styles of the chicken enough to finish off all the pieces that we had been served -- and, as it turned out, also managed to clean up the salad plate too!
But while all three of us enjoyed the food at Fairyland (though much less its service), we agreed that it wasn't worth waiting half an hour for.  On the other hand, I'm now curious to try out the Korean fried chicken on offer at Chicken Hof and Soju -- because, to judge by the lines for it, it must be at least three times yummier than the already pretty tasty chicken on offer at Fairyland! ;b
Posted by YTSL at 10:49 PM

Hi YTSL, looks delicious. I think I would've liked the wet version too. Can't wait for the comparison post. Long lines can only mean out of this world yummy.

Well, I know you've already seen my post on Chicken Hof so I won't bother to link to it! Glad to see a review of a different spot and will add this to my list of places to try. I wish they would offer different size portions - what if I went to one of these places on my own, it would be insane.

You're going to have a bit for the comparison post as I'm going to have to find not just one but two companions willing to wait in line for a time to try some fried chicken! ;b

Yep re having seen your Chicken Hof and Soju post -- in fact it was your post that got me to ask at Fairyland if we could split our chicken order into two styles! ;)

Totally agree with you re wishing they had different portion sizes. I wonder whether it's a Korean fried chicken restaurant thing to only have one size portions.

Yardbird, OTOH, allows half portion orders of their utterly delicious Korean fried chicken. I know you said it's still too far away for you to try but if you ever find yourself in the vicinity of that restaurant...