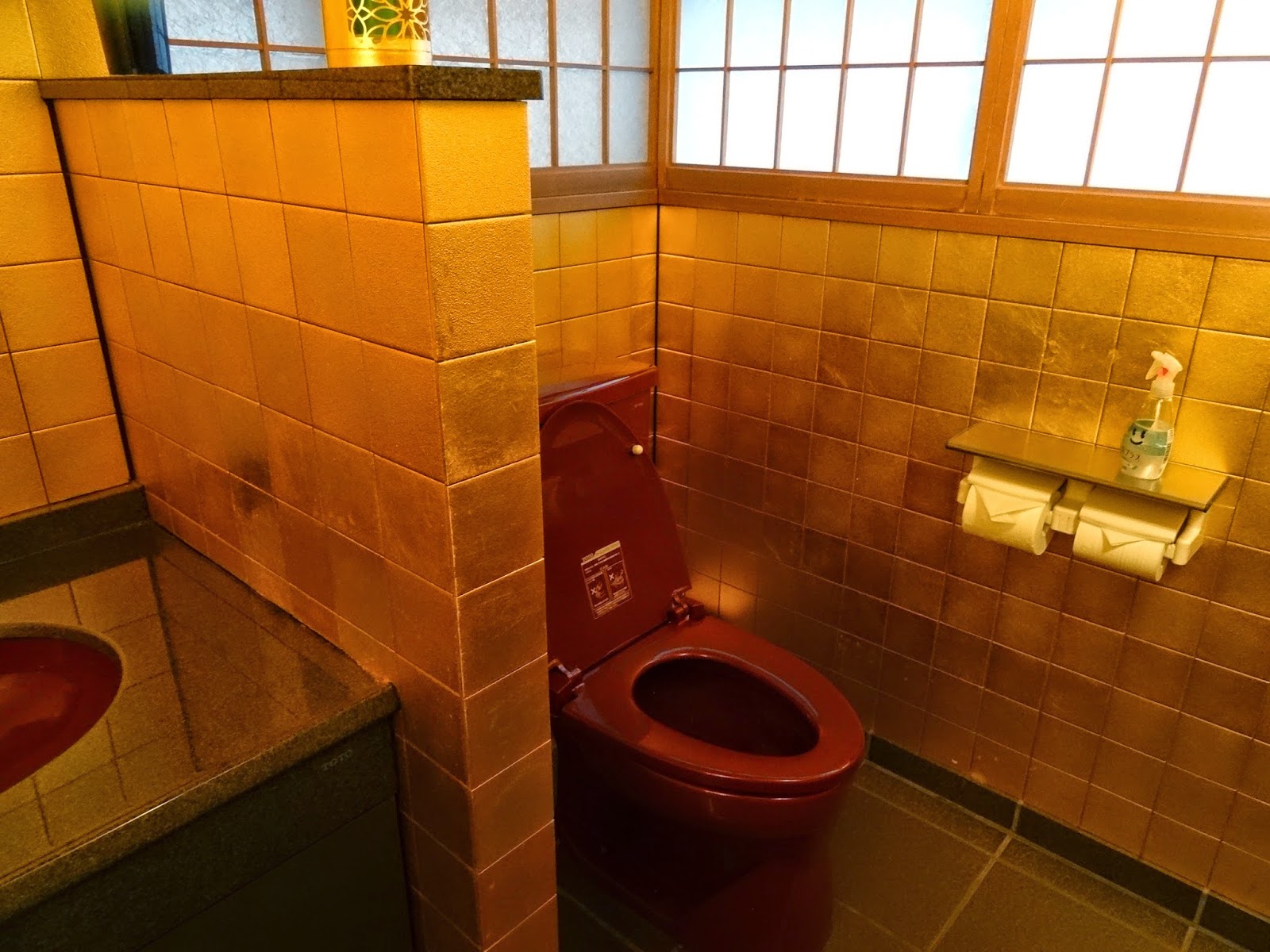 View of the women's toilet -- with its gold leaf gilded walls! :O
-- at the Sakuda Gold and Silver Leaf Company's main store 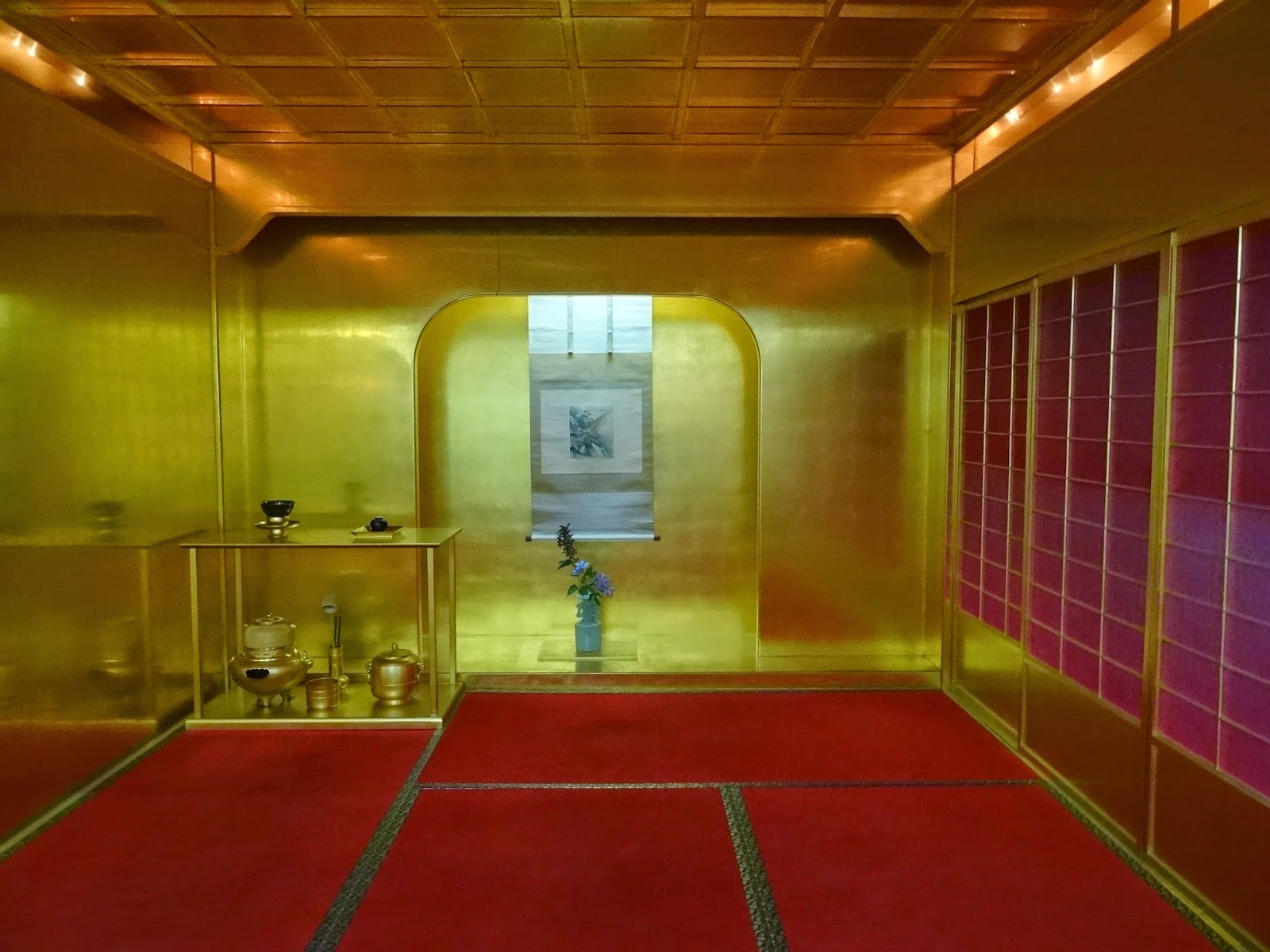 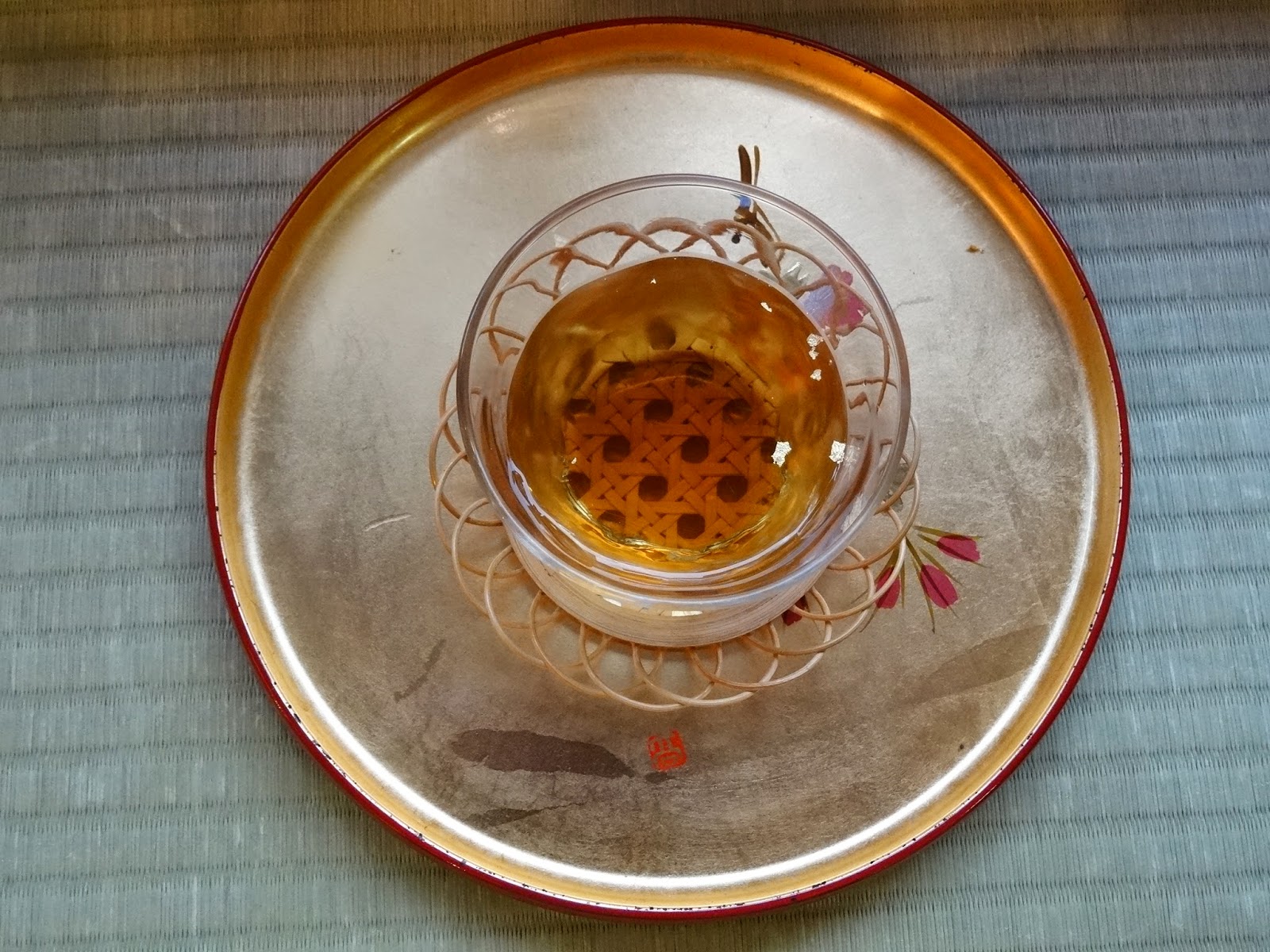 At both of these shops, I was served a complimentary
cup of tea with gold flakes in it!

Maybe it was meant to be -- in that the city of Kanazawa's name has the word "gold" in it (with Kanazawa literally meaning "marsh of gold" in Japanese). In any case, at the end of the 16th century, the production of gold leaf began in Kanazawa -- and today, this city produces 99% of the gold leaf in Japan!

With rain pouring down for much of the afternoon of the third day of my recent Japan trip, I decided a visit to a museum would be in order -- and headed over to the small but informative Kanazawa Yasue Gold Leaf Museum, where I learned about gold leaf manufacturing and saw many items with gold leaf components, including posters for the 1964 Tokyo Olympics, an elaborate Noh costume, folding screens and statues of religious figures.

Finding that it was still raining as I exited the museum, I elected to spend some time in the nearby main store of the Sakuda Gold and Silver Leaf Company.  Although I think the sales staff could easily see that I wasn't going to be someone who'd be buying up large sections of the store, I still was treated with great courtesy there, given a complimentary cup of tea (with bits of gold leaf floating in it) and asked if I would like to use -- or at least check out -- the women's toilet which had a golden glow to it courtesy of its walls being papered with gold leaf!

Next up, I decided I may as well go and check out Kanazawa's other famous gold leaf shop: Hakuza -- where, if possible, I was treated even better than at Sakuda!  More specifically, not only was I also offered a complimentary cup of tea with bits of gold leaf floating in it there but I was guided around the store, shown its reproduction of a 16th century Shogun's golden tea ceremony room and also given a free gold leaf production demonstration by an ultra friendly saleswoman who, it seemed, was keen to practice her English!

As it turned out, I ended up buying candy with gold leaf at both stores (which were a hit with my colleagues in Hong Kong!).  At Hakuza, I also bought a few actually reasonably priced small gifts even while managing to resist getting any of the gold leaf Hello Kitty items also on sale at the store!

Actually, the truth of the matter is that seeing so many gold leaf items around me actually made them seem less rather than more valuable and attractive to my mind.  And ditto re my finding out at the museum how thinly gold can get beaten to -- a thickness of around just 2/10,000 milimeters, in fact!! :O
Posted by YTSL at 8:49 PM

Wow! I think I'd be too nervous to use the toilets! What an intriguing visit.