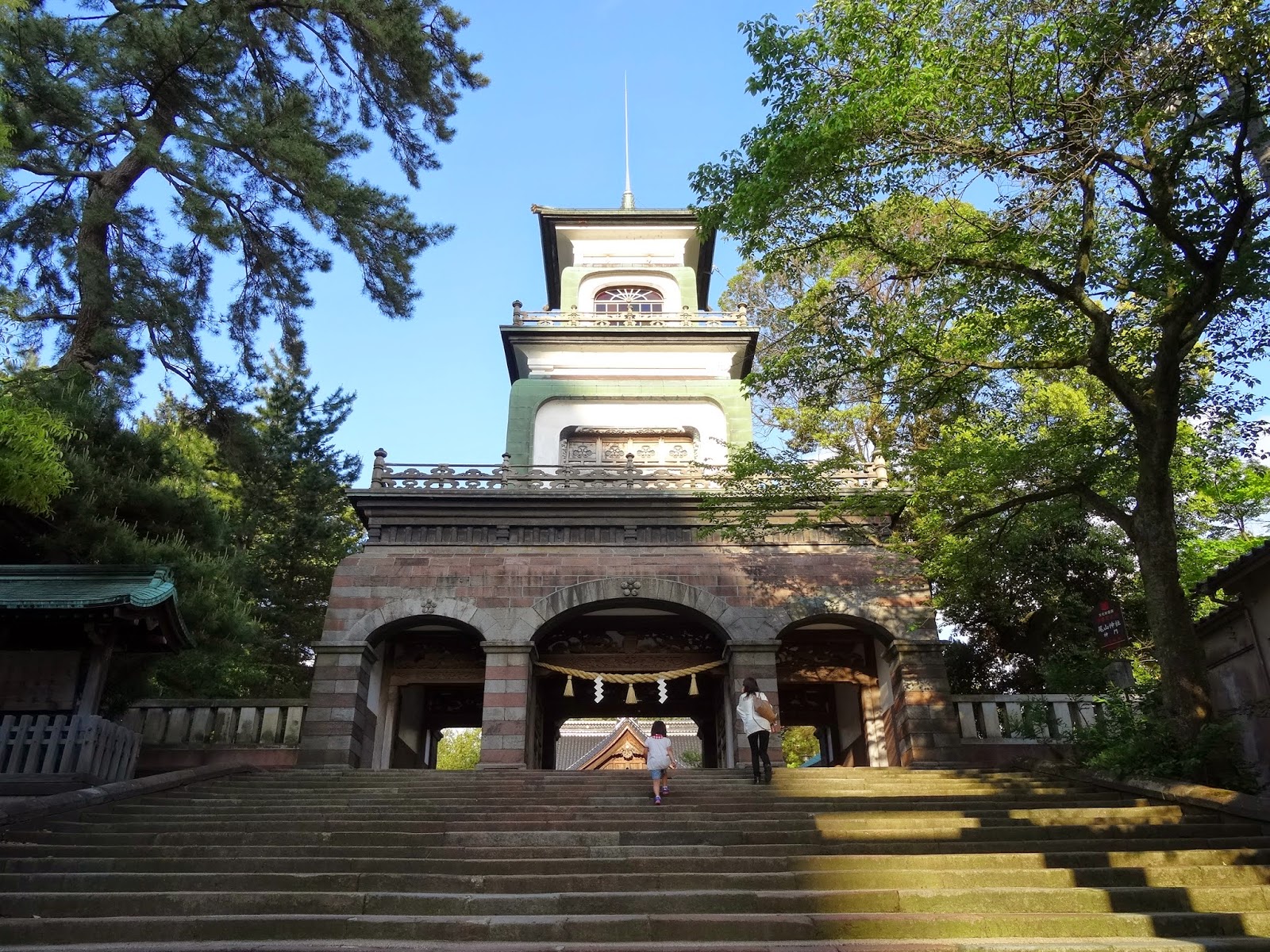 Not your usual Shinto shrine gate 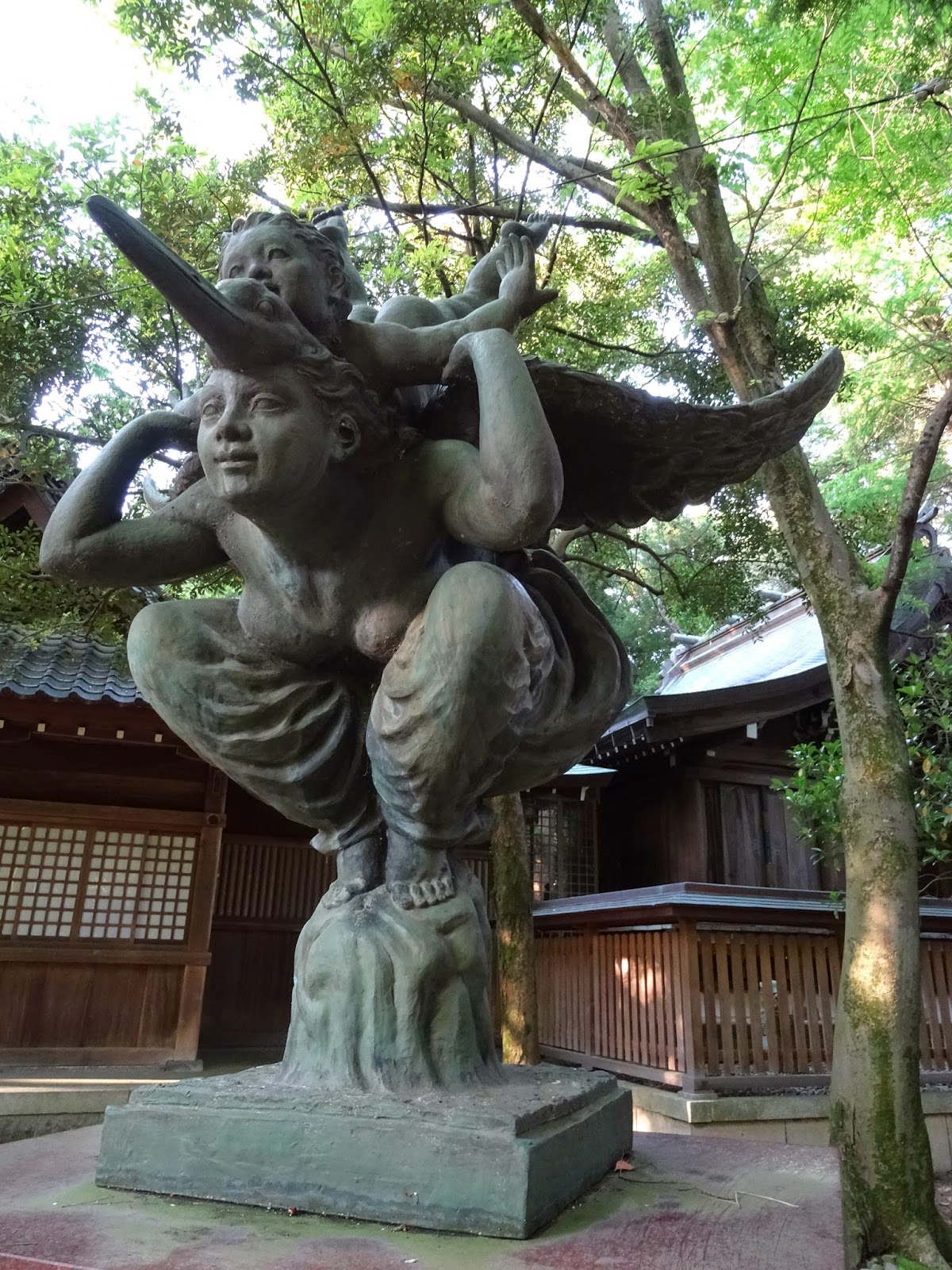 Not the most conventional looking statue I've seen
in the grounds of a religious establishment! 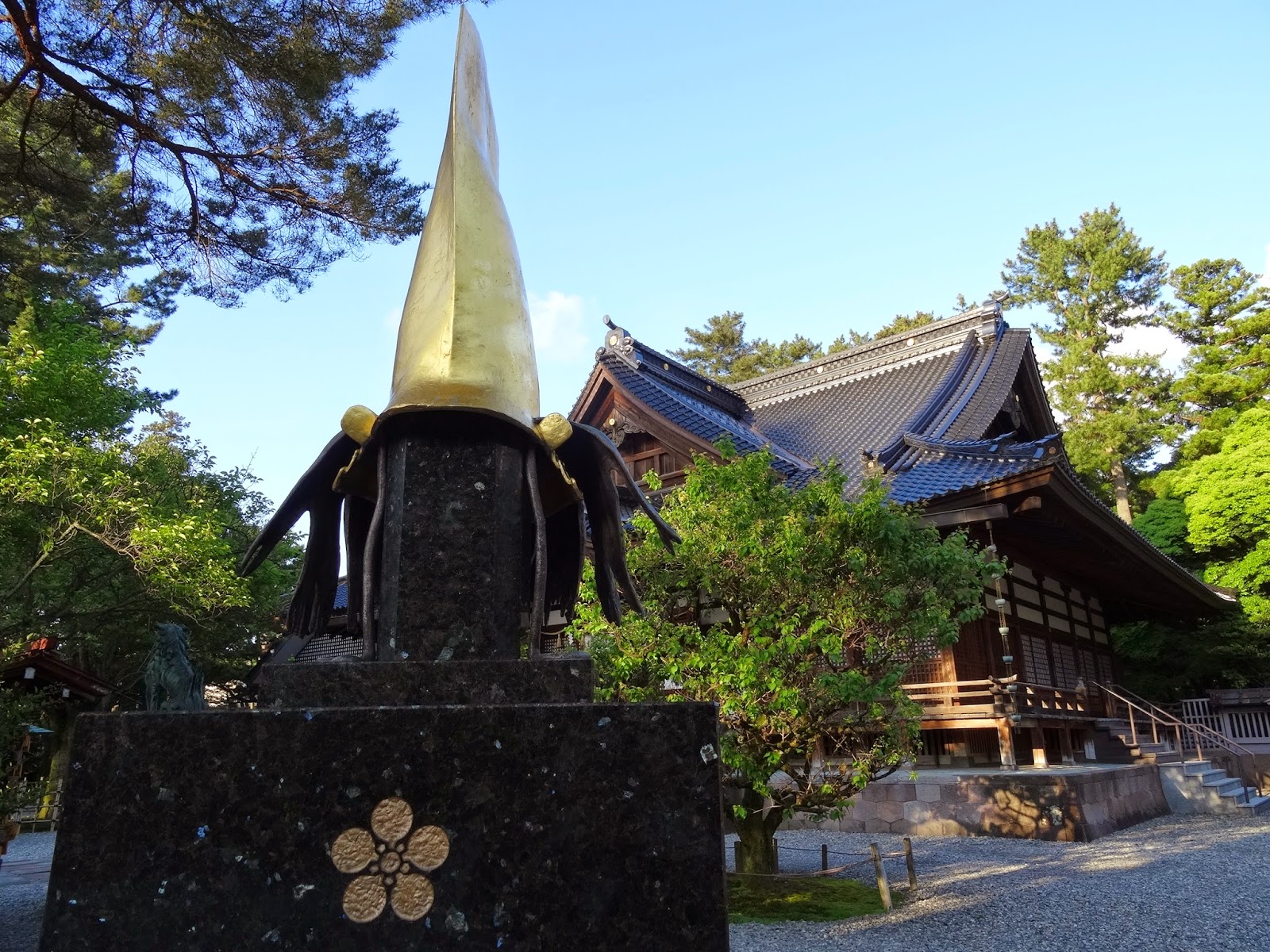 The gold helmet associated with Toshiie Maeda,
the general and feudal lord enshrined at Oyama Jinja


Prior to my visiting Kanazawa, I had heard it described as a Little Kyoto -- and it's true enough that, like Kyoto, it's a historically important city that was not bombed by the allies during World War II.  Also, like Kyoto, Kanazawa has geisha districts -- but I have to say that I found the two I visited (i.e., Higashi Chaya District as well as Nishi Chaya District), to be less atmospheric and also smaller than Kyoto's Gion).


Perhaps the biggest different between Kanazawa and Kyoto for me is that whereas I visited a lot of temples and shrines in the latter city (and so much so that by day four, I had a major case of temple fatigue and needed to go to places like the Toei Studio to cure myself of it!), I actually visited very few temples and shrines over the course of my time in the former.
By far the most impressive shrine that I visited in Kanazawa was Oyama Jinja. Constructed in 1599, it's famed for having a gate designed by a Dutch architect with Dutch and Chinese along with Japanese architectural elements rather than the far more usual torii.

While strolling about this Shinto shrine's peaceful grounds, I also came across other notable sights.  One of these was a much more friendly looking tengu from the scary looking ones I had come across at the Kenchoji Temple in Kamakura. Another was a replica of a gold helmet worn by the founder of the powerful Maeda clan.

On a more prosaic note: I was intrigued by how charms on sale at the shrine were put out in the open (i.e., not behind glass or anything) and there for worshippers to pick up themselves and pay for on an honor system.  Also, I do realize that this is Japan that we're talking about after all, but I have to admit to still finding it a surprising that some of the charms that were being sold at this Shinto shrine had the figure of Hello Kitty embroidered on them (rather than, you know, an image that was more distinctively religious in nature)! ;b
Posted by YTSL at 10:32 PM

The second photo of the bronze statue does look unusual for a Japanese shrine. I like it because it appears as if it is poised to take flight...Your links to Kamakura's Kenchoji Temple and especially your Wiki link to the fascinating Tengu, supplement this memorable blog.

I think that statue would look unusual even in a (Japanese) museum! And thanks as ever for checking out the links I embed in the blog as well as the blog post itself. :)