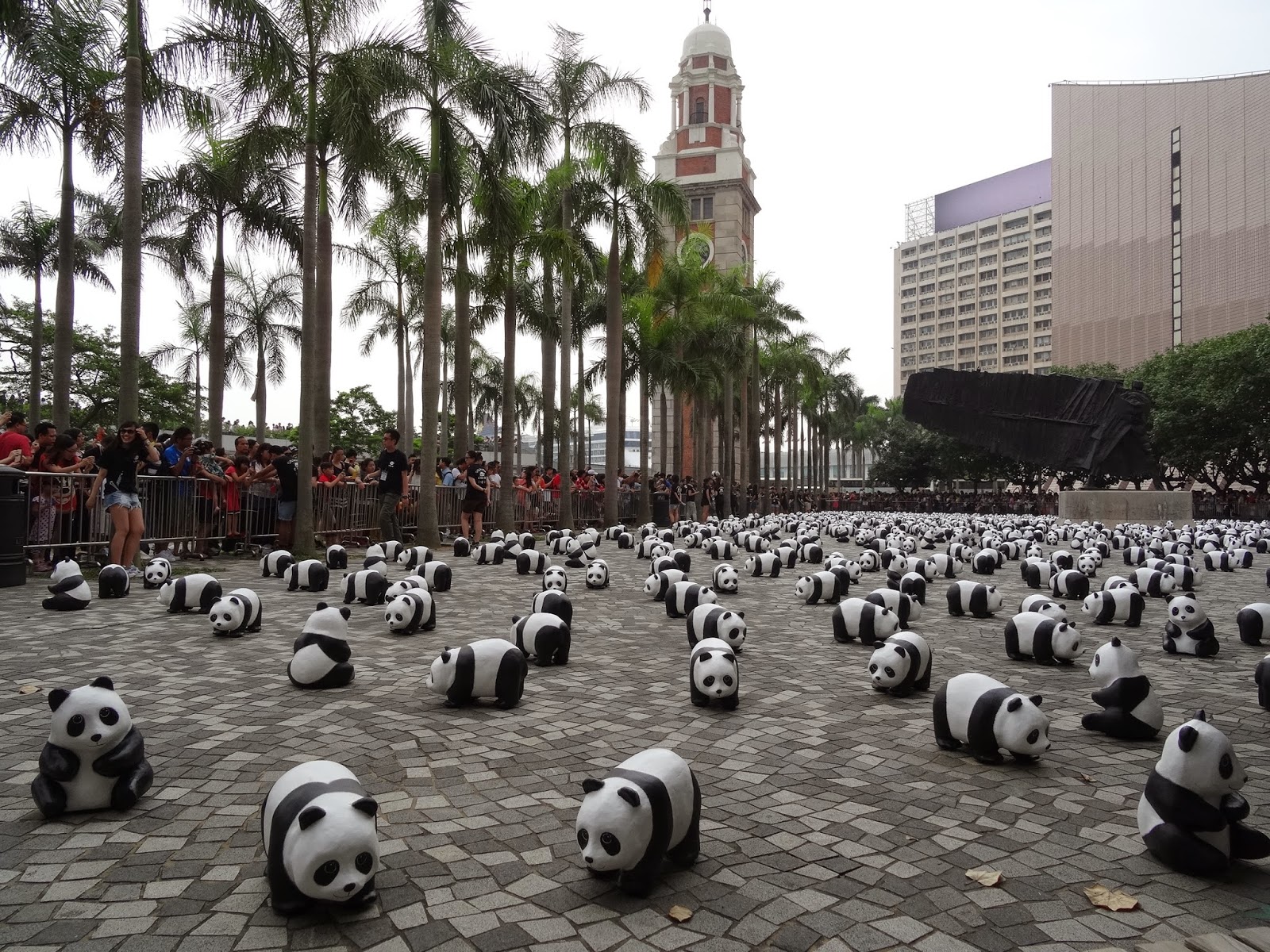 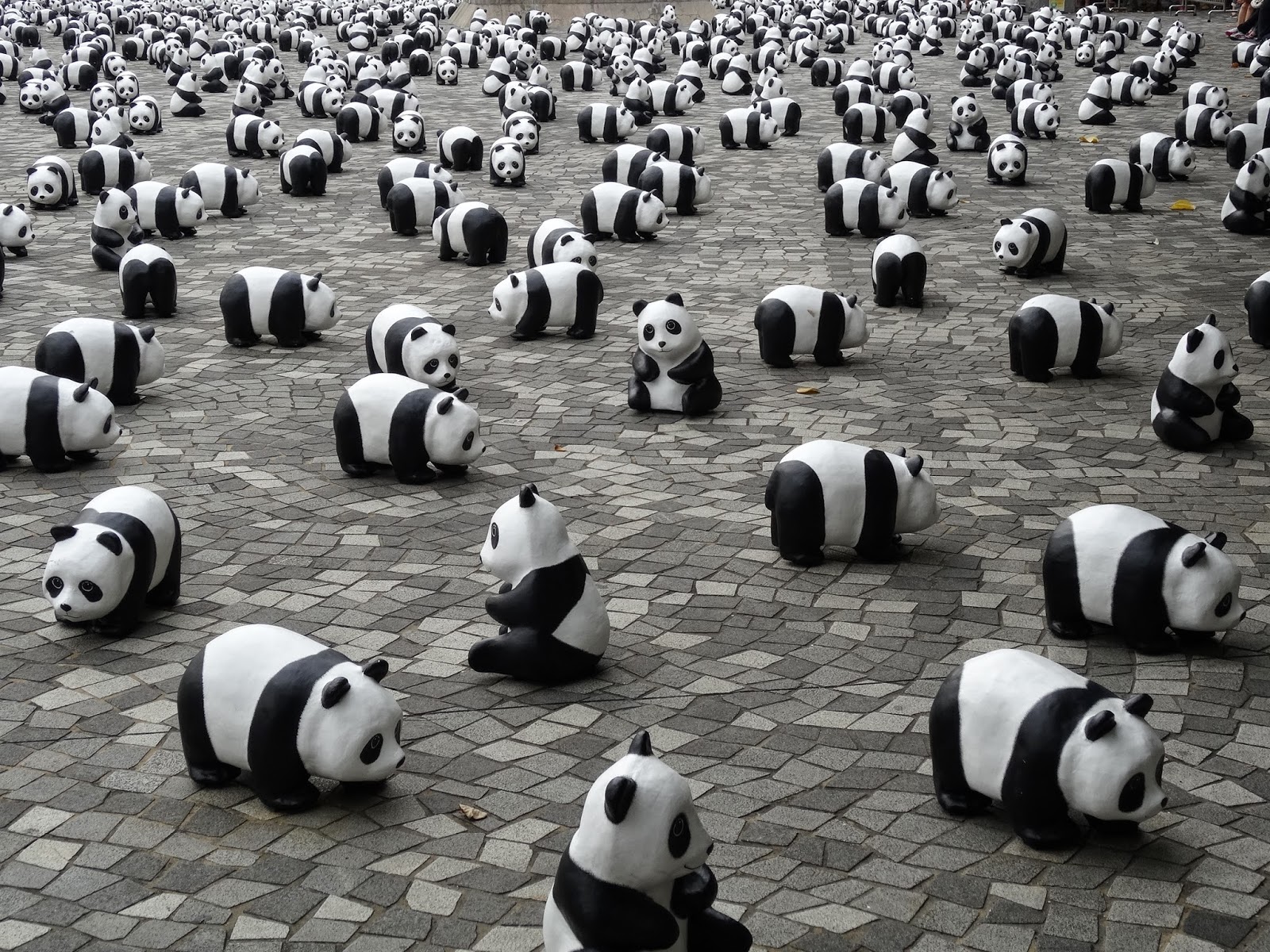 Seen up close, it's obvious that not all
those 1,600 pandas are alike! 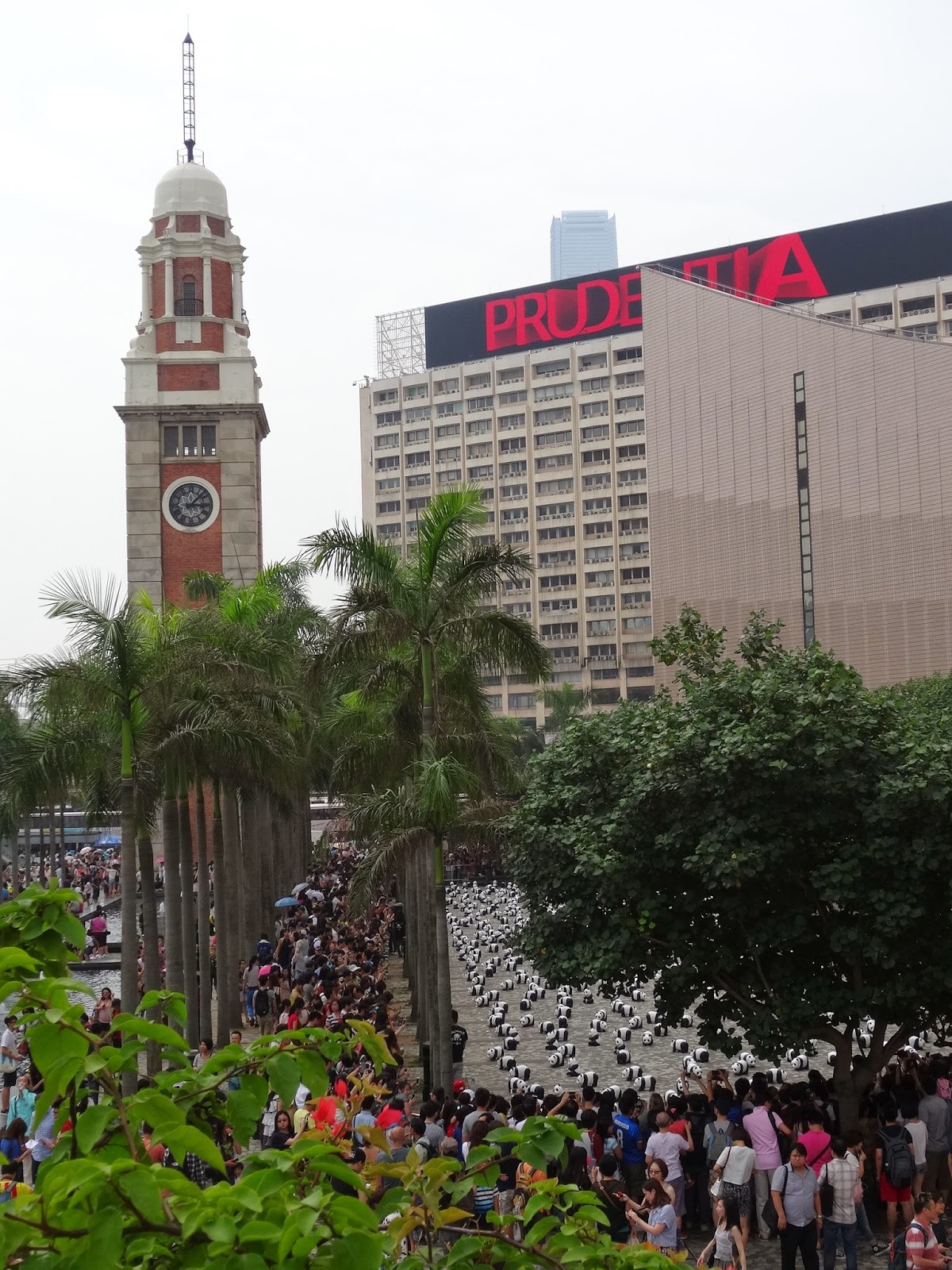 This view gives a good sense of the large crowd that
turned up to see the pandas, and also how much space
the pandas took up on the waterfront promenade!

If you haven't heard about it yet: French artist Paulo Grangeon created 1,600 paper mache pandas to highlight the fact that there are only 1,600 or so pandas left in the world.  To (further) spread the word, he launched a Pandas on Tour travelling exhibition in 2008 -- and now, some 20 countries later, it's reached Hong Kong.
From June 25 to July 17, the 1,600 pandas will take up residence at the former Police Married Headquarters in Central that's become home to a creative design hub known as PMQ.  Before then, the 1,600 pandas will be temporarily installed in the vicinity of a number of Hong Kong landmarks, including, as was the case on Saturday afternoon, the Tsim Sha Tsui Clock Tower.

Although I didn't have a great urge to go see the giant rubber duck up close in Victoria Harbour last year, I was drawn to check out the 1,600 pandas this past weekend.  Post seeing them up close as well as in photos, I have to say that I do think that they're very cute indeed -- and even while I'm not sure that seeing them makes me all that more actively interested in working to make sure that pandas don't go extinct, it does make me realize that 1,600 actually isn't that large a number when it's the number of members of an entire species left in the world...
Posted by YTSL at 12:48 AM

Wow, 1600 does seem like a very small number, indeed. I didn't realize that there were so few pandas left. I imagine that quite a large percentage of these are in captivity.

I really enjoyed the photos, both of the cute papier mache pandas, and their setting. It looks like they did draw quite a crowd!

I guess it makes sense re the panda numbers when they live in the wild in only one country in the world -- and a certain part of it as well.

On a happier note: I'm glad you enjoyed the photos -- and I get the feeling that there were more people than pandas at the TST Waterfront Promenade on Saturday afternoon! ;b

So cute. Only thing cuter than a baby panda is 1600 baby pandas! It would be really cool if I could adopt a few into my living room.

I wonder though ... if it rained would they turn into 1600 grey bears?

I hadn't thought about what would happen if it rained! I guess the 1,600 pandas' minders would run in and scoop them all up to safety as fast as they could! ;b