The Central Sector of the Imperial Citadel of Thang Long in Hanoi was inscribed onto UNESCO's World Heritage list in 2010.  Unlike many other UNESCO World Heritage-listed sites, however, it remains largely off the beaten tourist track -- and so much so that in many sections of it, I found myself so alone to the point where I felt things bordered on the eerie!

One reason is because it still hasn't been included in popular area guide books like Frommer's Vietnam.  So to those who do go to the Hanoi Citadel, parts of which date back to imperial times, others to more recent periods of Vietnamese history -- enjoy the peace there while it lasts! 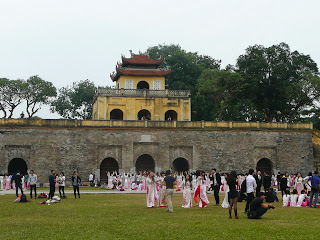 The Hanoi Citadel's Doan Mon (South Gate) looks out to a large
grass lawn on which a host of recent university graduates
were happily frolicking on the afternoon that I visited :) 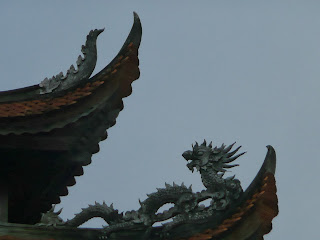 Dragon and other details of the Doan Mon 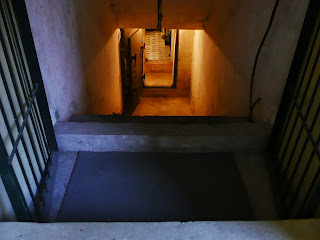 Go down these stairs and into... 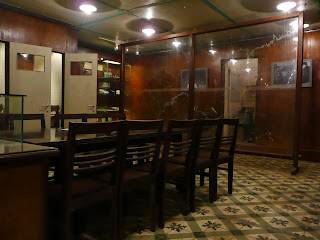 ...the military bunker (i.e., the General Command
Headquarters) during the war against the Americans 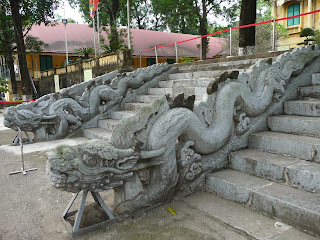 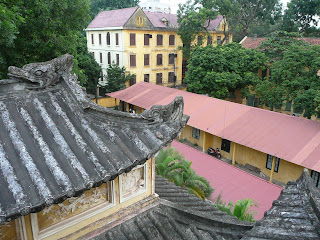 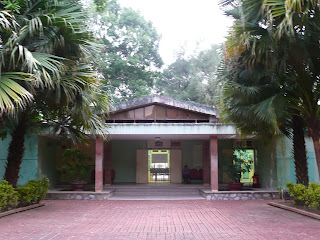 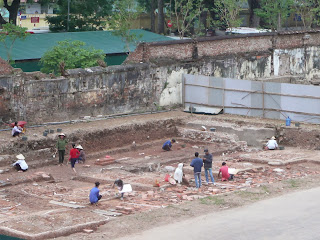 Archaeological work carried out in these grounds have
helped uncover artefacts dating back some 13 centuries
Posted by YTSL at 11:59 PM

It'd be interesting and eye-opening to see how contemporary Vietnamese folks represent the long war with the Americans and allies. Did you get any sense of how much their experiences loom in the lives and memories of people living there today?

On a cheerier note, a new restaurant called "Friends and Pho" has opened up nearby and I'm looking forward to a visit! : )

I didn't talk much to Vietnamese people I met about the war but the sense I get is that there are so many Vietnamese who were born after the war ended and that for them, all that really is in the past.

At the same time, there remains a noticeably sizable military presence in Vietnam -- though a number of these uniformed folks I saw probably were police officers (whose uniforms are more like the military than, say, those of the American or Hong Kong police).

Also when I visited the Military History Museum, several Vietnamese tour groups were there too. At least a couple of groups consisted of schoolkids and another mixed gender group consisted of what appeared to be old military veterans. So I'd say that the war is definitely something that looms large in the Vietnamese imagination to this day.

This photo-essay on the Hanoi Citadel is like a mini-history lesson. The photo of the stairway leading to the bunker is good but rather creepy and claustrophobic...
The view from the Pavilion, contrasted by the colonial building in the background, is the photo I like best.

I read your comments in a previous Vietnam entry, where you mentioned the website travelingmark.com. Since Angkor is on my wish list for a future trip, I read it eagerly. Well, after reading that bitter tirade against Cambodia, I'm having second thoughts about going there...Well, after that horror story, in order to restore my romanticized expectations of Angkor - I'll have to watch Christopher Doyle's cinematography of Angkor in the concluding moments of In The Mood For Love!

I'm glad you get the creepy feel of that bunker. It was one of those places where I wish I wasn't the only visitor! The pavilion was also a bit scary too as its steps were on the super steep side. And, again, there wasn't a single other person in that space while I was there!

Re travelingmark.com -- that guy really did seem to have a terrible time in Cambodia. I still would like to visit Angkor Wat some day but I'm thinking it may be one of those places where I really will have to consider going with a guide rather than on my own... :S