Thank You and Rest in Peace, Nelson Mandela 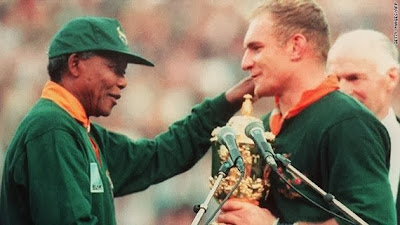 It feels strange to feel sad upon learning of the death of a 95-year-old man.  Normally, you'd think, "he had a good innings", and focus on his having lived so many more years than the average human.  But, to say the least, Nelson Mandela was no ordinary man.  Indeed, he may well have been one of the most inspirational humans who's ever walked on the face of this earth.

I first heard about the anti-apartheid leader when I was a student in England.  The mid 1980s were a time when anti-apartheid campaigns were mounted in Britain and elsewhere, Release Nelson Mandela posters were a familiar sight and even boarding school pupils like myself became motivated to do such as boycott banks and other organizations that did business with South Africa.

I remember where I was when I first heard that Nelson Mandela had been released from prison and remember being among the people shocked and saddened when we finally caught sight of him as a free man on TV and saw that, as more than one person gasped, "he's so old!" and fear that he would no longer be up for a fight.  But wow, how wrong we were about that -- and how wonderful to also discover how capable of forgiving and re-conciliating (with) old enemies he was.

In 1995, South Africa hosted the Rugby World Cup Finals.  I was living in Tanzania at the time, and watched a few of the games on TV with Tanzanian friends.  I remember when South Africa played on one of the European teams, my Tanzanian friends laughed hysterically when the teams lined up before the start of the game and we saw that, as one put it, "there are more blacks on the European team than the African one!"

But when Nelson Mandela appeared before the start of the final match of that tournament clad in a Springboks jersey as well as cap, no one laughed.  In fact, I think no one said anything for a time -- because people were so shocked at the sight and our hearts threatened to burst upon realizing how big-hearted as well as truly amazing a gesture he had just made.

When South Africa won that final match -- and thus the entire tournament, everyone in the room I was watching with was cheering happily at that result.  In all honesty, I'm not sure they would have if not for Madiba having done what he had done that day, and looked so genuinely ecstatic that his nation's team had triumphed.  (An addition note: I could feel too the sincere respect both Mandela and Francois Pienaar had for each other, and loved that a black South African and white South African could feel that way about each other.)

I know when Invictus came out, some reviewers scoffed at the film's making such a big deal out of Mandela's support for the Springboks and the role that it had in making South Africa the Rainbow Nation.  And it's true that South Africa today is one that is not without its problems, including there still being much economic inequality between the races.

But I also know how I felt that day in 1995 watching the Rugby World Cup Final in Tanzania.  Hearing the multi-lingual South African national anthem being sung was another great memory of the occasion -- this particularly upon realizing that the sentiment of "God bless Africa" and the music is the same as Tanzania's!

Still, nothing beats the sight of Nelson Mandela happily wearing a Springboks jersey and cap -- and in the process, showing how so very able to forgive and unify a whole nation, never mind inspire the world, he was.  Thank you and Rest in Peace, Madiba.  And yes, we all miss you already.
Posted by YTSL at 8:06 PM

The concern now is that South Africa has lost its moral compass... can it continue in the right direction without him?

He definitely was larger than life and one of the most humanistic people of our generation.

In any event, some people will argue that South Africa (or at least its government) has been floundering for years now -- even while others point out to the great strides already made. E.g., fears that once Mandela dies, the blacks will riot and turn on the whites and kill them has not happened - thank goodness.