The "desolate trench(es)" of the Shing Mun Redoubt 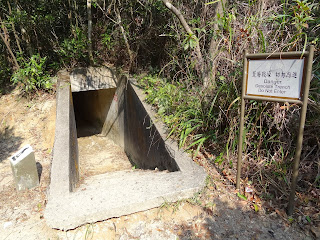 I normally heed warnings but in this case, I didn't
-- and went in to check out the "desolate trench" 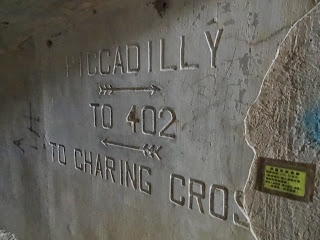 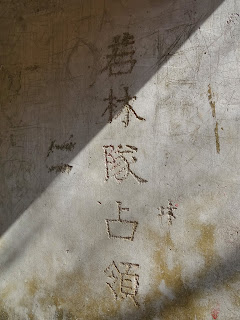 The Japanese characters for "Captured by the Wakabayashi Unit"
chipped into the wall by men of the Japanese 228th Infantry
Regiment that attacked the redoubt in December 1941
Earlier today, a friend and I hiked from Shing Mun Reservoir to Tai Wai. Before embarking on our hike proper, however, we also went and looked around a nearby portion of what used to be the Gin Drinker's Line designed to be Hong Kong's version of France's Maginot Line.

As the Maginot Line was by the German forces, the Gin Drinker's Line was easily overrun by the Japanese military -- with the Japanese forces breaching it the Shing Mun Redoubt section of the line in just five hours and the entire complex, which had been anticipated to hold for at least three months, falling after less than four days.

Perhaps because the Gin Drinker's Line proved to have been such an utter failure, there doesn't appear to have been any official efforts to conserve or even erect signs in the area to identify it.  As an example, the tunnels and other remnants of the Shing Mun Redoubt are referred to on nearby signs as "desolate trench(es)" -- and it's only thanks to the likes of Jason Wordie (in particular, his Streets: Exploring Hong Kong) and a local history enthusiast friend that I knew of their existence.
Another surprising thing about the Shing Mun Redoubt is how easily accessible they are -- at least for hikers, since they are located very close to the Shing Mun Reservoir end of Stage 6 of the Maclehose Trail.  This piece of information may be particularly unexpected for those Hong Kong movie fans who have viewed Tactical Unit: Comrades in Arms since in that film, the location seemed so remote -- and also quite a bit closer to the old Ma On Shan mine and mining village than is the reality! ;b
Posted by YTSL at 7:50 PM

it's always interesting to see the history.

Happy Solstice to you too -- and glad to see you blogging and commenting on my blog again! :)