The best museum in Southeast Asia? 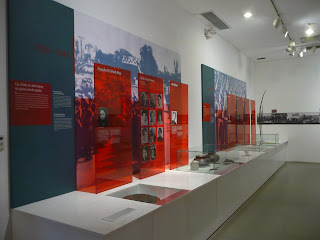 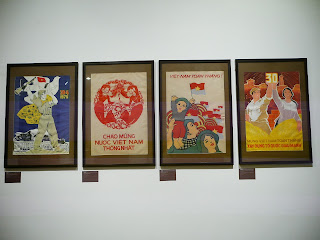 Colorful political displays in the same section
of the museum

A long time ago, my mother knew that if she went traveling with me, at some point, we'd pay a visit to a museum.  Even when I was a kid that she and my father took to England every year for a number of years, I'd ask her to take me to museological institutions -- with the British Museum and Science Museum in London having been among my favorite parts of the British capital city.


Had I known how excellent the Vietnamese Women's Museum is though, I'd have chosen it as the one museum she visited while in Vietnam.  At the very least, it was definitely the best curated of the three museological establishments I visited in Hanoi -- and I also might go as far as to suggest that it's a strong candidate for being the best curated museum in the whole of Southeast Asia!

The way things developed though, it was the final official visitor attraction that I checked out on my Vietnam vacation -- and it really did feel like a case of saving the best for last.  Put another way: whereas the Military History (AKA Army) Museum and Hoa Lo Prison (museum) feel distinctly dated in their presentation style, the Vietnamese Women's Museum comes across as very contemporary, cutting edge in many respects even.

Reopened in 2010 after a four year upgrade and refurbishment, this museum's curators should be congratulated for making up for the institution not being object rich by making clever use of photographs, videos and other materials -- and generally presenting their information through words as well as other means in ways that were very informative, interesting and involving.

Content wise, it was interesting to find exhibits and information in the museum that confirmed certain findings I already had made as well as answer some queries I had about other parts of Vietnamese life and history, and introduce me to phenomenon I hadn't previously known existed (such as the worship of mother goddesses in the country).

With regards to the first: the Women in History section of the museum drove home facts already served up at the Military History (AKA Army) Museum and Hao Lo Prison that women were heavily involved in Vietnam's struggle for national independence and unity.  With regards to the second: I found an exhibition of street vendors -- who are predominantly female in Vietnam -- to be particularly interesting.

Highly rated on sites such as Trip Advisor, the Vietnamese Women's Museum is highly recommended to museophiles, be they female or not, and those who curated and designed its exhibits are a great example and inspiration for the region's museum professionals. On a personal note, I feel like I learnt a lot about Vietnam's women and their place in Vietnamese society, culture and history there -- and I'm so very glad that I included a visit to this museum dedicated to them as part of my Vietnamese vacation.
Posted by YTSL at 1:23 AM

After reading this blog I checked out the available YouTube videos on this museum. Hanoi has much more cultural depth than I expected. It even has an opera house.

Hanoi also has a water puppet theater that my mother and I went to on our final evening in Hanoi. I'm not blogging about it as I didn't take pictures but would highly recommend going to a show should you ever visit the Vietnamese capital. :)