Musings on a 72 year anniversary 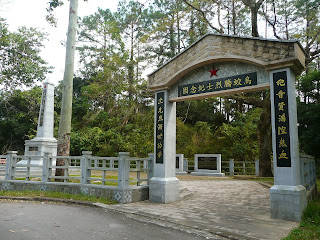 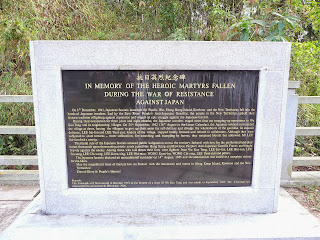 "The past is a foreign country: they do things differently there."  That famous line in L. P. Hartley's The Go-Between came to my mind at the Wu Kau Tang Martyrs' Cenotaph earlier today -- for while reading the words engraved on a stone whose headline reads "In Memory of the Heroic Martyrs Fallen During the War of Resistance Against Japan", I got to realizing that 72 years ago today, the Japanese invaded Hong Kong, Malaya and many other territories, and attacked Pearl Harbor (which lies on the other side of the international date line -- hence it being recorded that it was attacked on December 7, 1941).


In contrast, this December 8 finds Hong Kong at peace.  Not only that but, as one recent study has shown, the contemporary inhabitants of this overwhelmingly ethnic Chinese territory think more positively of the Japanese than the Chinese from the mainland. (And even while there are those who feel strongly that the islands alternately known as Senkaku to the Japanese and Daiyu to the Chinese belong to China, I have a strong suspicion that these same people also like eating Japanese food, think nothing of buying Japanese brand electronics and own at least one -- and probably more -- Hello Kitty or other Japanese pop culture item!)


As it so happens, yesterday evening had found me at the 2nd anniversary celebration of my favorite sake bar.  At the all-you-can-eat-and-drink event, I had happily feasted, imbibed and hung out with a South African friend, a Hong Konger and a number of Japanese customers.  It's sobering to realize that there have been periods of history when our ancestors would have been enemies -- and also a lovely feeling to know that that's not the case with us.

As regular readers of this blog know, I've enjoyed lots of great times in Japan, am a big fan of Japanese food and libations, and love much about Japanese culture and pop culture, including many of its films.  I've also had a number of Japanese friends over the years, starting all the way back with a boy named Shinya who was one of my two best friends at St Christopher's, the preschool we had attended in Penang.


Coincidentally, when my siblings attended St Christopher's, they too had Japanese friends.  My sister's was a girl named Tomomi who we couldn't help nicknaming Thermometer -- teehee! -- while my brother's was a boy who, for some strange reason, my brother actually had not realized was not of the same ethnicity, never mind nationality, as him until when, on a visit to our home one day, my brother suddenly spoke to his friend in our mother tongue and found that he couldn't understand it!

So while my parents as well as grandparents had spent years of their life under Japanese rule, my siblings and I have only ever known the Japanese as friends and such.  And while I don't think any of my grandparents ever did have any Japanese friends, both my mother and father do.  Truly then, the past is a foreign country -- and one that in many ways really was much less nicer than the present, however imperfect the latter may be.
Posted by YTSL at 11:21 PM

hey,
I went to St Christophers school too!:)

Well, well! Hope you enjoyed your time at St. Christopher's too! :)