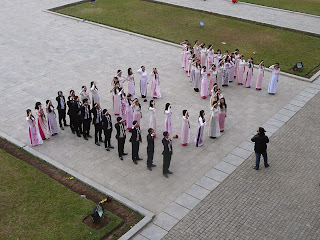 Graduates at attention and spelling out what I'm
assuming are their college's initials for the camera :) 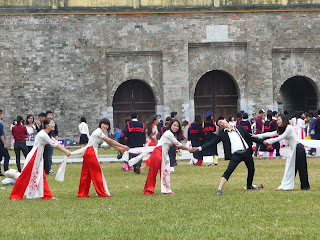 The joy of these new graduates is so very obvious! 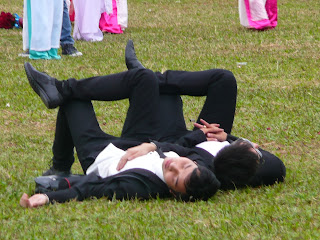 And ditto re this pair's sense of being carefree! :)

While doing research for my Vietnam trip, one point came through loud and clear: Hanoi's a very noisy city -- to the point where some people consider it a good thing for their rooms in the Old Quarter hotels in which they were staying to be windowless!
But while the usual culprits fingered for Hanoi's noise pollution are its car and motorcycle horns,what most caught my attention on my first day in Vietnam's capital city were the sounds coming from happy students exuberantly their graduation on the lawn in front of the Hanoi Citadel's South Gate.

So loud were they that I could hear them from the grounds of the Military History (AKA Army) Museum several meters away!  But the nearer I got to them, the more I found myself being captivated by their antics than the noise they made -- and so much so that I couldn't resist snapping shots of those high spirited individuals, particularly as they struck fun poses in front of the cameras wielded by their friends and hired photographers!

The ticketing officer at the entrance to the central Hanoi Citadel complex confirmed for me that those joyful individuals were celebrating their college graduations.  And over the next few days, I saw other newly-minted graduates posing for photos at other photogenic Hanoi attractions such as the Temple of Literature and the banks of Hoan Kiem Lake.

At the Temple of Literature, black suited male graduates and and ao dai clad female graduates were joined by uniformed military academy graduates. I have to admit to finding it very interesting -- and also gratifying -- to watch them happily mingle and chat with a number of visitors from Western countries, and thereby provide them with an experience I'm sure they weren't expecting to have while in the country. :)
Posted by YTSL at 5:46 PM