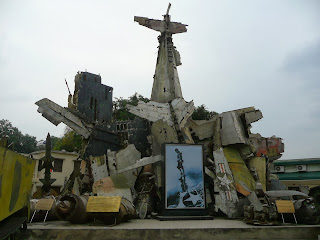 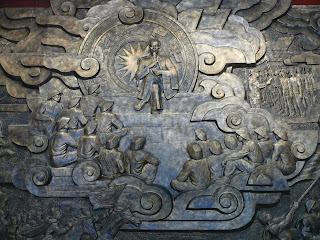 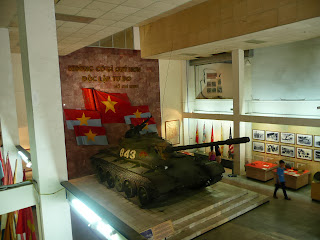 Although there's far more to Vietnam than the Vietnam War (or, as the Vietnamese call it, the American War), there's little doubt that that fairly recent period of Vietnamese history looms large in the imagination of Vietnamese and non-Vietnamese alike -- with a visit to Hanoi's Military History (AKA Army) Museum serving up confirmation of this.


Granted that the first few rooms one enters focus on earlier periods of Vietnamese military history -- ones which saw regional conflicts as well as battles waged against the Chinese and French.  Still, what lingers most in my mind are items, including photographs, and tales pertaining to the decades-long war waged against American and South Vietnamese forces from 1956 to 1975.

Within the museum grounds, captured US military aircraft and US military wreckage catch the eye.  Inside the rooms of exhibits, photographs of Vietnamese men and women in wartime provide interesting glimpses of the struggles and life then.

Even more evocative though are the toy belonging to a 3-year-old child and items of clothing belonging to other children who were killed in US bombing raids on Hanoi.  Still, the saddest exhibit of all was the one about the women whose husbands and children had lost their lives while fighting for their country against the Americans (and allied South Vietnamese) forces.

Rows and rows of elderly women's faces stared out at the museum's visitors, with each portrait bearing information as to how many of that pictured woman's relatives had given their lives to the cause.  My heart damn near broke when reading about one woman who had lost ten sons along with her husband to the war.  And I found myself hoping that her fate is not shared by anyone else in the future.
Posted by YTSL at 8:33 PM

Glad to see you've added another destination to your travel experiences. Relevant to your photo-essay is the sad truth that the Vietnam War, in its desecration of the landscape, was really a technological and chemical assault upon nature itself.

The Vietnamese have a history of being very tough in repelling foreign invaders (they withstood three Mongol invasions). This is why the French, and the Americans after them, having involved themselves in a civil war - were defeated...Your photo of the plane debris sculpture in the courtyard of the Army Museum symbolizes this defeat.

Absolutely re (the) war involving a desecration of the landscape as well as destruction of human beings. Re the Vietnamese being tough and resilient: it was amazing to learn that the population of Vietnam has grown to 90 million!