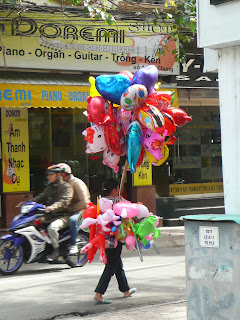 Yes, I admit it, the Hello Kitty balloon was
the one that particularly caught my eye! 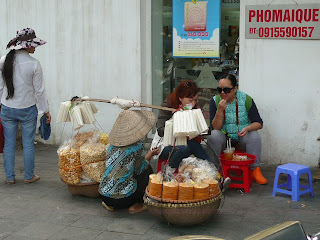 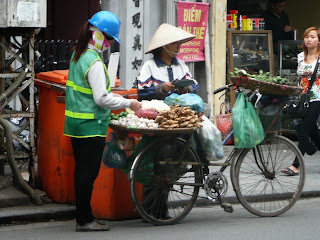 While standing around waiting to get into St. Joseph's Cathedral on the morning of my fourth day in Vietnam, I found myself enjoying observing life as it took place on the streets, sidewalks and stores whose fronts often were open for all to see (with nary a wall to block one's sight of what wares there were inside).  While previously I had been too busy walking around (while in Hanoi, I relied on my own two feet and didn't take a single car taxi, motorcycle taxi (xe om), bus or cyclo) and trying to not get lost, I finally had the time to see the world pass by me -- and it actually was quite fun!


The section of humanity that particularly caught my eye on that and quite a few other occasions were the street vendors, especially those of the mobile variety, who walked about touting their wares or moved about with a bicycle so heavily laden with goods that it's a wonder they could move, never mind have nothing fall off them!

Of interest were what they chose to sell -- frequently food but also such as balloons, flowers, non la (the conical hats that are apparently unisex but I generally only ever saw Vietnamese women wear) and knitted caps (that one generally would associate with far colder weather than what we found in Hanoi) -- but I also found what they used to transport their goods fascinating as well, not least because the quang ganh (two baskets slung from each end of a wooden or bamboo pole) that many of the invariably female street vendors ably hauled about looked so very heavy.

Because of what I had previously read about snatch thieves and camera theft in Vietnam, I was initially wary of taking street photos, and especially of street vendors -- being fearful that they'd come up and demand money for my having taken photos of them.  But with each passing day that I was in Vietnam, the safer and safer I felt -- though it's also true that I never quite conquered my fear that if I bought food from the street vendors and sidewalk cafes where people sat on stools and used other stools as tables, it might well be a case of travel not only broadening the mind but also loosening the bowels! ;(
Posted by YTSL at 7:13 PM

These photos and concise text confirm that you are a natural photojournalist.

I think many people find me overly long winded... so it's a real treat to read that there's someone who considers my text "concise"! Thank you for that, and all the positive comments you've left on my blog. :)