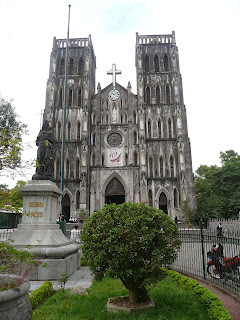 Not a sight one would expect to see in an
Asian communist country's capital city! 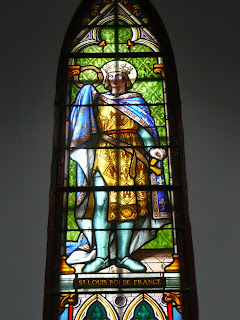 I didn't know that one of the French King Louis
had been made a saint, and had a stained glass
in his honor at Hanoi's cathedral! 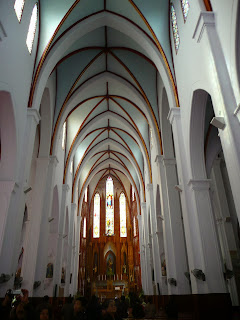 The cathedral's nave is big, airy and beautiful! :)

As has become my usual practice before going on holiday, I bought a Frommer's guide book for the area but I also did some online research for extra information and tips.  But while I think my copy of Frommer's Vietnam served me very well on the food and restaurant front, I actually found it somewhat wanting with regards to advice as to what to go see in Hanoi.


More specifically, it was only after perusing UNESCO's World Heritage list that I felt the Hanoi Citadel was worth checking out.  And it was only after reading Rusty Compass's entry on St Joseph's Cathedral that I figured that Hanoi's Roman Catholic cathedral would be worth visiting.

Upon getting to that location on the fourth day of my Vietnam vacation, I wondered if my mother and I shouldn't give it a miss.  It wasn't that the worn-looking exterior didn't look attractive -- rather, there clearly was a funeral taking place it, and a super well attended one to boot, complete with legions of priests and nuns.  (We figured that it had to be a senior clergyman who had died.)


But my mother, who likes visiting churches and cathedrals far more than Taoist temples, decided that she really wanted to have a look inside the building.  So we stood outside and waited until the funeral service was over, then went and checked out St. Joseph's Cathedral's interior.

Upon doing so, I'm glad we did -- because it really is a very beautiful building indeed.  And after seeing it, I have to register my surprise that such a big cathedral exists in Vietnam -- in terms of such an impressive building having been constructed in what was then a French colony and also it continuing to actively be utilized for religious services through to this very day.

Lest we forget, Vietnam is a Communist country as well as an Asian one -- and the father of Communism, Karl Marx it was who opined that religion is the opium of the masses!  Actually, based on that quote as well as having a number of areligious friends who hail from Communist countries past and present (namely, China, Slovenia, Russia and Kazakhstan), I was even surprised to learn from our Ha Long Bay tour guide that Vietnam is a predominantly Buddhist country!

A day later, at the wonderful Vietnamese Women's Museum, I came across a special exhibition on Worshipping Mother Goddess: Pure Heart - Beauty - Joy and was further astounded to learn about a Vietnam-specific religious worship and practice.  More than incidentally, I'd highly recommend a visit to that museological institution as it was by far the best curated of the three that I visited in Hanoi.  For example, its Worshipping Mother Goddess exhibition had marvelous videos that were colorful, lively and put a smile on my face through seeing the sheer joy on display in them. :)
Posted by YTSL at 8:08 PM

I haven't been to Vietnam, but judging by your posts I get the impression that the combination of a colonial past in an Asian society, makes for an interesting travel adventure.

The weathered exterior of St Joseph's Cathedral would make a fitting cover for a Gothic mystery novel...The interior is impressive, but I must admit to not caring to linger in cathedrals because they make me feel as if I'm on the upper level of a tomb or a crypt...

But, if I were forced to choose between having to walk alone down the dreaded stairs into the war room at the Hanoi Citadel as seen in your earlier blog - or, having to be alone in St Joseph's - well, I'd try to be religious and choose the cathedral!

The more I travel in Asia, the more I realize not only how many countries in the region were under colonial rule at some point in their history and, even more sadly, how many of them have had major wars fought on their soil.

More than incidentally, I found it interesting that I didn't see any war memorials at St Joseph's Cathedral. But maybe it's just a case of my not knowing they were there since pretty much all the writing I saw in there was either in French or Vietnamese.