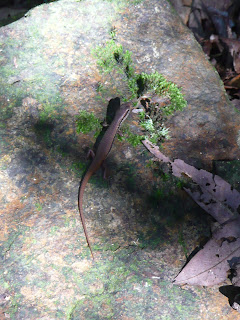 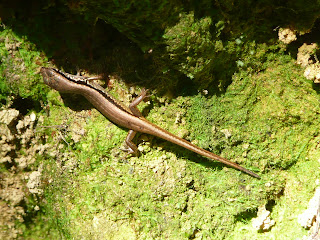 Continuing with my documentation of fascinating wildlife spotted while out hiking in the Big Lychee (N.B. Those interested can look here, here, here and here for some earlier examples!)... :b

In reaction to going up to Devil's Peak (on my own) last Sunday and not finding much shade nor breeze up there as well as along the way, I decided today to go with my available again regular hiking companion to Tai Po Kau Special Area. A heavily wooded 460 hectare nature reserve set in a valley on the eastern slopes of 647 meter high Grassy Hill in the Central New Territories, it proved to have many shady areas indeed.

Due in part to the heat, my hiking companion and I's pace proved to be considerably slower than the estimated times given in a guide we were using. But another major reason we took quite a bit longer to go along the 7.5 kilometer trail was because we kept on spotting interesting sights that we wanted to not only stop to admire but also try to capture with our cameras.

This being a fairly thickly forested area, there weren't many scenic views to capture our attention. As if to compensate, however, we spotted plenty of examples of Hong Kong wildlife -- including a number of skinks whose territory a certain part of the trail looked to have crossed into.

All in all, we spotted more than 10 skinks -- many of which we spotted as they did their best to scurry away towards areas where they would be better camouflaged. Happily for us shutterbugs however, a couple of these lizards -- whose precise species I still can't identify with certainty after looking at sample photos in the University of Hong Kong's School of Biological Sciences' reptile photo database -- reacted to our presence by freezing and presumably hoping we wouldn't do anything to harm them (which, of course, was the case!).

Were the reptiles we spotted (and photographed) long-tailed skinks, slender forest skinks, brown forest skinks or Indian forest skinks? If pushed to say, I'd opt for the last mentioned but I'd be happy for others to correct me if they know otherwise! :)

An alternate explanation for their behavior is that they were trying to break in to the lucrative field of reptiles in movies and TV and hoped you were a talent scout for some lizard films. :-)

Hmmm... those skinks are going to have to do better than that to break into movies or TV... ;b

I can't tell the differences between these slimy lizards... I won't even go as near to take pictures!!!

The first photo is very cool with the colored vegetation and/or colored minerals reflected in the sun and the matching color of the skink.

You sure you wouldn't be tempted to take photos of those skinks -- you who are quite the shutterbug yourself? ;O

I like the first photos for the colors but I like the second photo because the shot of the skink's clearer. :)