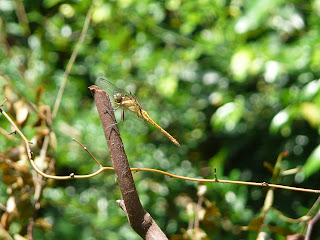 This shy dragonfly was not easy to photograph 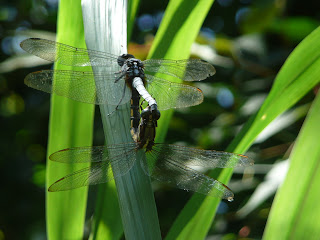 These pair of dragonflies, on the other hand,
were far less shy and way easier to photograph! 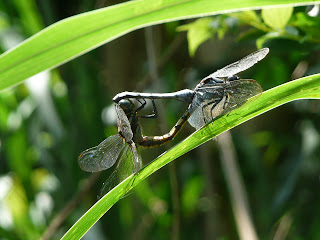 ...and lest it not be clear in the other photo what they
were doing, this shot should be revealing enough! ;D

Earlier today, my regular hiking companion and I hiked up (and then down) Mount Davis, Hong Kong Island's westernmost hill, on what turned out to be -- upon checking my records -- my 100th hike in Hong Kong.

A friend had told me that this area was inhabited by many large spiders. While I did see a fair few this afternoon, they just could not compare in either size or number to the spiders spotted on the eastern section of Lamma Island a few weeks back or while hiking along Lantau Trail Stage 10. And although another friend had warned me to watch out for snakes while on Mount Davis at this time of the year, I happily did not catch sight of any of those slithery creatures this afternoon.

Instead, more notable sights on this hike included a few birds of prey flying not too far above us, one blue tailed skink (like that which I had spotted on Mount Parker close to a year ago) and a number of beautiful butterflies of various sizes and colors along with some scenic vistas that took in land, sea and gorgeously blue sky. For all this though, I have to admit the visual highlight of today's hike came in the form of a pair of dragonflies we spotted going at it in earnest -- including in flight as well as while balancing on long leaves!

Like I think I've stated before, one reason why my hiking companion and I get giddily happy upon spotting copulating insects is because they tend to be more focused on each other rather than concerned with getting away from human photographers like us! And should anyone need proof, just take a look at the photos at the top of this blog entry and notice how much nearer I could get to the dragonfly couple than to the single dragonfly -- and how much clearer the photos of the former are vis a vis the latter as well!! :)

Cool photos, YTSL! Although I must say that when I clicked to the larger-size versions, I inexplicably felt less like a scientific observer and more like a perverted voyeur. ;p

P.S. Congrats on your 100th Hong Kong hike. That's quite a milestone!

Hmmm re your feelings upon viewing the larger size versions of my *dragonfly* photos. Guilty conscience perhaps? ;DDD

It's so fun reading about your hikes now that I have more context in my head about the locations you mentioned.

And yes, you certainly did get a close shot of those dragonflies!

I'm glad that you've made it to Hong Kong and now have a better context with regards to the Hong Kong locations I mention. :)

And yes indeedy re the dragonfly close-ups -- especially of the pair in the entry's 2nd and 3rd photos! ;b