Up Devil's Peak and down to Lei Yue Mun 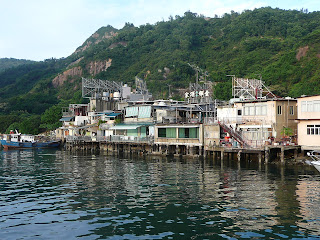 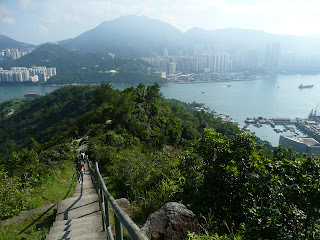 Scenic view from near the top of Devil's Peak 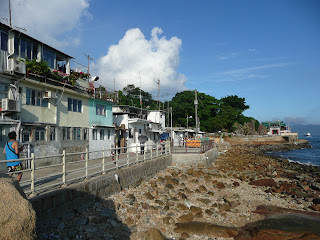 Lei Yue Mun dwellings and -- to the right of the photo
-- the Tin Hau temple by the water's edge
Earlier today, I broke one of the cardinal hiking guidelines I normally follow: "Never hike alone". I couldn't help it. Despite my regular hiking companion being indisposed (due to her having to fulfill a family obligation) and the temperature being on the high side, the sky was such a beautifully brilliant blue and the quieter, greener part of Hong Kong kept on calling out to me.

To make things safer, I opted to go along a route that I had previously been on (with my regular hiking companion): one that took me up to the top of Devil's Peak, where the ruins of a redoubt (that served as a location for Project A according to Hong Kong (& Macau) Film Stuff's Phil K) are to be found -- and great views are to be had.

On the way down, however, a trail I had not previously been on beckoned -- one whose signposts promised to lead me to Lei Yue Mun, a fishing village famous for being one of the places to eat seafood in Hong Kong. Upon following that which actually was a footpath, I discovered that it consisted of stone steps for the most part -- and led me through a wild area above which many birds of prey flew, then a squatter village and down all the way to sea-level, ending near an over 200-year-old Tin Hau Temple that actually still is by a waterfront.

While I enjoyed my time up on Devil's Peak this afternoon, I have to say that the highpoint of today's excursion actually was the time I spent exploring Lei Yue Mun -- a place I had hitherto only viewed from the Hong Kong Island side of Victoria Harbour (and seen featured in Cheung King Wai's All's Right With the World).

Based on physical appearances, the impression I got is that the residents of this part of Hong Kong are among the less economically well off of the territory's inhabitants. At the same time, however, there is a distinct sense of community there -- and one which includes younger members, including families with preteen children, rather than just aged individuals as is the case in places like Tai O.

In addition, there was a holiday air about Lei Yue Mun this afternoon. To be sure, the visitors attracted to this neck of the woods by the seafood restaurants played a part in this. However, I also observed plenty of locals enjoying the air and space out by the waterfront -- doing such as fishing and sketching the scenery as well as just plain hanging out and enjoying the good weather and views.

This, coupled with the people hiking up Devil's Peak -- quite a few of whom had cameras with them ;b --provided some more positive proof that, contrary to popular belief, there really are many Hong Kongers whose primary leisure activity is not (window) shopping (nor, for that matter, just eating!) -- and long may this state of affairs continue! :)

You most be in real good shape.

Those are gorgeous photos, and some lovely descriptions! It sounds like a wonderful excursion. Did you stop for a meal there?

you were very brave, not so long ago, a Air NZ man got lost in HK hiking.

Glad you like the photos and descriptions. Didn't stop there for a meal because, among other things, I really wanted a shower more than anything else by hike's end! (Sweated buckets yesterday!!)

No lah re the brave part. But, really, it looked so beautiful yesterday I just couldn't resist!

So jealous, I wasted a perfect hiking day!

Small consolation I know but I'd say that Sunday actually was too hot to be an absolutely perfect hiking day... but, still! Ah well... keep your fingers crossed that we can go hiking this Sunday!!! ;b