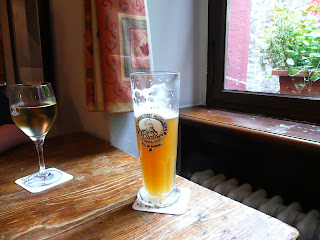 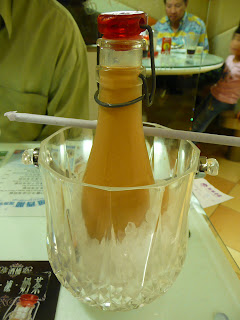 There's no two ways about it: I do like my drink. Contrary to what some people might think, however, I don't only care for alcoholic beverages! And it really is the case that I tend to choose what to drink based on the occasion but also, for meals, what food is being eaten.

For example, on my German holiday last year, during which I ate much traditional German fare (like was the case when visiting Heidelberg), there was no question to my mind that beer -- particularly local draft beer -- was the ideal drink to have at lunch as well as dinner! (Equally, lots of Japanese food -- including sushi, yakitori, kushiyaki, "Genghis Khan" and, most definitely, izakaya offerings -- go great with alcoholic drinks like beer but also sake or umeshu.) On the other hand, bar for seafood, I feel that Chinese dishes are best paired with non-alcoholic beverages, including -- of course -- Chinese tea.

In Hong Kong, tong lai cha (translated as cold milk tea) is the cold drink of choice for much of its populace. For my part, I find that this rich-tasting sweet non-alcoholic drink made from a blend of black Indian and Chinese teas mixed together with condensed milk (or evaporated milk and sugar) can sometimes be a bit too rich or sickly sweet for my taste when not made well. So when in doubt (which is often), I tend to order the less sweet -- and seemingly more difficult to not make well -- tong leng cha (cold lemon tea that's far more "lemony" than that favored by the "sweet tea" favored in the American South!) instead.

However, I have no qualms about ordering tong lai cha at any of the branches of Tsui Wah, a chain of 24 hour cha chaan tengs that really is of a surprisingly reliably good quality. And for its packaging alone, I do find some fun in ordering and getting a bottle of Tsui Wah's smooth and nicely chilled milk tea champagne (which, for the record, does not contain any alcohol in it -- and yes, is meant to be drank with a straw)! :b

the cold milk tea i had in HK was also too sweet for my taste buds. while American clients always tell me that our iced tea here is too sweet as well.:p i enjoy saki with sashimi.

I am sure I will give tong lai cha a try, but from your post I am sure it will be too sweet. I like how Tsui Wah present their milk tea champagne--I'll be looking them up.

Your second photo is interesting, Do you serve the tea pouring it in the ice cubes?

I take my tea black and if I have Chinese tea.

A1 Top size may apply to clothing size, I don't know.

Have you heard of it before?

Such interesting drinks! I like my tea without any sugar nor milk :) Nine years in Germany and no beer for me, that's one beverage I do not like at all.

Very interesting. I'm in the American South but don't drink sweet iced tea any more. Have developed a taste for it without sugar, but would love to try your lemony one.

I try to match up drinks with my meals too. I particularly enjoy a beer with German food as we live in an area that has many deli and places where you can grab a weiner schnitzel to go :) Great take on the theme, and I think I'll now go have breakfast with a non-alcoholic coffee :)

That tea drink you described sounds delicious...I love sickeningly sweet things!! My own caffeine-packed DRINK POST is up!

Hi YTSL, the milk tea champagne looks delicious. I like the presentation it comes in with the individual ice bucket, corked bottle and straw. Very cool!

Wonderful photos and a great take on this week's theme.

I also think certain drinks go best with certain foods. I don't like overly sweet drinks. In the southern U.S. when I order iced tea, I always request that they mix half sweet tea and half unsweetened tea. That's about right for me.

You asked if the animals are regular visitors to my deck and the answer is yes. I also have at least 15 other species of birds that come to my deck for water depending on the time of year and when it's extremely cold, iced over or snowing I always put out a variety of seeds, nuts and fruits on the deck for the animals.

the tong lai cha looks good but i usually drink my tea without sugar.

Next time you're in Hong Kong, I suggeset you order tong leng cha and see if you prefer that. :)

Well, if you decide to give tong lai cha a try, Tsui Wah is a good place to give it a try. :)

And re A1 Top Size: sorry, where did that come from? I'm thinking a previous conversation we had but can't remember where or when!

Tea with sugar or milk? That's how traditional Chinese tea should be drunk. So guess you'd like that! :)

And no beer in Germany? Goodness me -- the beer there is so wonderful! :O

Maybe you could give the lemon tea a try -- with or without sugar added into the mix. :b

I really like German sausages and sauerkraut. Also the pickled herring salad that I previously thought was more of a Scandinavian thing. :)

Maybe you can make your own tong lai cha then! :b

Thanks, as ever, for reading and appreciating as well as looking. :)

Half sweet tea combined with half unsweetened tea sounds good. And oh wow re your regular visitors -- you sure do sound like a good hostess. :)

Do you mean Indian tea? If so, do you add milk?

Ah nothing like a good proper pilsner beer but not with everything. I haven't tried the teas. Cold milk tea sounds like it is not to my taste but the lemon tea might be up my street. I wust see if I can get them served in Chinatown

One of the neat things about travelling is trying the local drinks.

Hong Kong has some very delicious non alcoholic drinks which I consider a treat when I find them here in the US.

Hong Kong Coffee Tea is very tasty though I find the sweetened condensed milk makes it more sweet than I like. But since I only have it a couple of times a year I enjoy it.

I haven't found the hot lemon lemon tea I had in Hong Kong here but I remember how much I enjoyed it there. A great mid-afternoon pick me up.

Hello. I am a big fan of beer. Have a great weekend.

Now I am thirsty ! I don't drink alcohol but I love alcohol free beer !

German beer is so much more than just pilsener! And for the record, the beer in the photo is weissbier (wheat beer). :b

I actually haven't had milk tea in a while. (OTOH, I have cold lemon tea every weekday at lunchtime!)

I agree about it being neat to try local drinks when traveling. (I also like trying local food, including ice cream! ;b)

I know of at least one German who doesn't like beer -- so I guess there must be some Australians who are the same way. Bet they'd be in the minority though! :D

I haven't tried alcohol free beer. Any ones that you'd particular recommend?