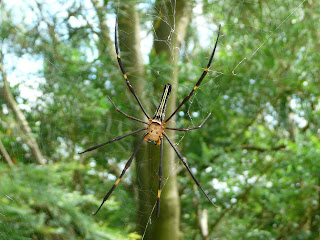 One of numerous large spiders spotted
along Stage 10 of the Lantau Trail
(click on the photo to enlarge it and really get a scare!) 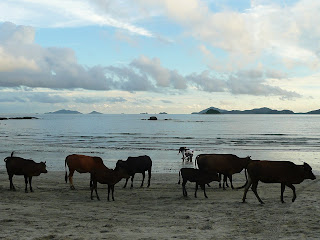 Feral cows wandering about on Cheung Sha Beach
Unlike the previous two weekends, I didn't go hiking this weekend and thus didn't massively add to my photo collection. (Instead, I attended two Summer International Film Festival screenings and viewed one more movie at the Hong Kong Film Archive -- add a movie viewed this past Thursday and Friday and even this movie geek does think that she's seen more than her fair share of films in the past half week or so! [N.B. For interested readers, I have a regularly updated Most Recently Viewed Movies list on the left section of this blog, complete with links to trailers and/or reviews of the films.])

So rather than share photos taken this weekend, here's sharing two taken two Sundays ago -- and thus 'compensate' for not having a photo of the large snake I crossed paths with last Sunday by showing other photos of wildlife that hikers are known to encounter in Hong Kong.

On the subject of spiders: now that I've come to think of it, the largest spiders I've seen in Hong Kong have been far away from the Sai Kung Peninsula -- not only in the wilds of Lantau but also in Tai Lam Country Park. As for bovine creatures: Yes, I know that I've put up photos of the Big Lychee's not inconsiderable cow population on this blog before (e.g., here and here) but I reckon that the photo in this entry is particularly worth sharing because of how the scene is made really surreal by the amusingly casual disregard of the cows by the humans in the picture.

In any case, I trust that the two photos once again provide proof positive of the existence of a far different side to Hong Kong than the concrete urban jungle that many people most associate with this part of the world... :)

YTSL, I really love that second photo with the distant layers of clouds and islands all in different shades. And the three people, crouched together like they are, almost look like a cow (although of the black-and-white variety) if you squint your eyes.

As for that spider, I wouldn't mind coming across it in nature, but I dare say I would freak out if I found it in my house!

what are feral cows? Are they wild?

The spider is really big.

Teeheehee re your comments about the three people -- not least because I CAN see what you described... with a bit of imagination! :D

Re the spider: seeing one on a hike is okay but we must have spotted over 20 or even 30 that day. That was freaky! ;(

FWIW, that beach is the longest in Hong Kong at 3 kilometers in length and the cows kindly stuck to one small section of it... :D

Feral cows are cows that may have been domestic(ated) previously but now appear to wander around on their own accord.

For a definition of "feral", go here:-
http://en.wikipedia.org/wiki/Feral

And yes indeedy re the spider! ;b

I am definitely not a fan of 8-legged neighbor. My wife, though, is as anti-spider as one can be before becoming phobic about the little critters. She was once recruited for a job in the U.S. Southwest--the state where one had better carry his/her official citizenship documents--and one of the reasons she didn't even go for an in person interview was the very large number of very large spiders (plus scorpions and other beasts of that type) that had been very comfortable there long before humans did.

The feral bovines, water buffalo particularly, are quite amazing. They are huge animals--much bigger than I thought they would be when I first saw one--and having a bunch of them wander around a park would be a real treat. As long as you are careful where you step.

Must admit that I'm not as freaked out of spiders as I am of snakes. Good thing to since I see far more spiders -- and large ones at that -- while out hiking in Hong Kong than snakes!!

If you want to photo a wide variety of big arachnids in Lantau, walk off trail (Lantau Trail) on a 'seasonally overgrown' woodlandpath' woodland path. A few hundred metres will do you. Carry a big stick.

Hmmm re your suggestion. This especially since walking along Stage 10 of Lantau Trail, my friend and I already spotted so many big spiders!!! :O

Aloha, over from Mr. Bijou whose photography makes me miss Hong Kong. I saw a bunch of those spiders after a rainy period on some country park walk once through a weird shortcut....my husband leading the way through a tunnel, batting webs away, me bent over like some monk bowing through the forest. It was horrible.

Thanks for coming over and visit -- and giving me a giggle over the vision you gave me of you and husband out hiking! (Oh, and great taste in cinema, you've got there! ;b)