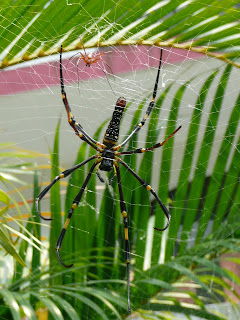 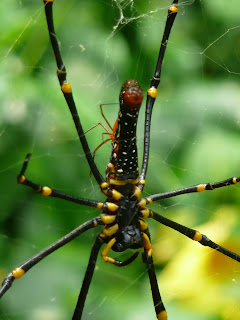 Male spider doing something behind
-- and to? ;b -- its larger female mate 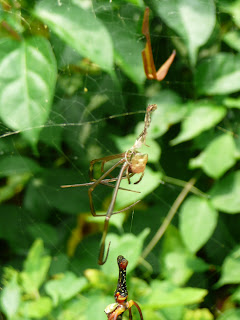 Update: a friend who saw this photo
told me that it's of a spider's exoskeleton! 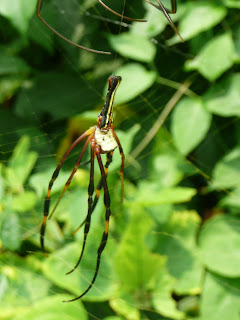 Update: this is the baby female spider whose
exoskeleton I spotted hanging above it!
Up until today, I had looked upon the Lantau Island hike I'm currently in the middle of putting up photo-essays on (see here and here, with one more to come in the next few days) as the hike which had yielded the most spider spottings.

But this super hot and humid afternoon, my regular hiking companion and I saw -- no lie! -- at least 50 spiders on the 4 kilometer eastern circuit that led us from Sok Kwu Wan to Mo Tat Wan, Mo Tat Old Village, Yung Shue Ha (which has been identified by some as Chow Yun Fat's home village!), Tung O (another village also identified as Chow Yun Fat's ancestral village), up to a pavilion that lay 136 meters above sea level and then back -- and back down -- to Sok Kwu Wan.

More than a decade and a half ago now, I went on safari in Tanzania to Lake Manyara National Park, Serengeti National Park, Ngongorogoro Crater (which falls within the Ngorongoro Conservation Area) and Tarangire National Park. In Tarangire, there were so many elephants about that my safari companion (an Irish aid worker friend with the very Irish name of Fionnuala) and I actually became quite blasé with regards to viewing them -- and only got really excited when seeing such as large herds of the pachyderms crossing a river.

By midway through today's hike, that how my regular hiking companion and I got to feeling about the spiders we saw along the way, despite many of them being pretty large indeed. At the same time though, we recognized that some of the webs we saw this afternoon were among the largest we've seen -- with some of them having a three dimensional quality in that they were double and even triple layered and some others actually had corners to them that curved to form something akin to a sticky cobweb box in which to trap prey!

Then there were the two forms we saw and initially thought were dead and dessicated spiders, only for them to move when we pointed our cameras at them. After looking some more, I've got to thinking that at least one of them (that which is in the four photo at the top of this entry) is a baby or at least still juvenile spider.

But I'm not sure if the thing hanging above it (i.e., that which is in the third photo above) -- that resembled la scary alien from a Hollywood sci fi movie to my eyes -- is another baby spider or something else altogether! (Update on July 14th: a friend -- thanks, David S! -- has told me that the third photo is of an exoskeleton and confirmed that the fourth photo is indeed of a baby female spider! :D)

Wow, the first two photos are terrific close ups of the spiders. I would be interested to know if someone identifies them as I'd like to read about them.

Well, I've IDed the species as Giant Golden Orb Weaver spiders. But yeah, I'd really like to get some confirmation that what I saw in photos 3 and 4 were baby spiders. They really were quite scary looking in the flesh! ;O

Wow. Those are some impressive photos of some impressive-looking spiders! I was intrigued, and read up on them a bit on the link you provided. I wonder how common it is for there to be such a big size difference between males and females.

I notice that you have started putting up your feed as a partial feed. Is that to help alleviate the content theft?

Glad you like the photos. (I have a couple of friends who are less enamored about them... ;S)

And yes, you're right re the feed: I'm tinkering with it to see what happens re the content theft as the offending blogger looks to be getting my content from a feed. :S