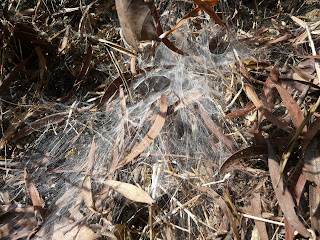 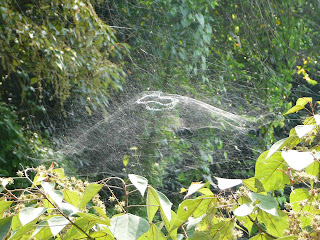 As those who regularly check out this blog (and not just its Photo Hunt entries) know, I have a fondness for photos of large spiders that I've come to realize is not shared by some of the blog's visitors. However, I'm actually not sure whether these people know that I also find the webs that spiders weave fascinating as well as beautiful.

Maybe it's the symbolic anthropology training I received (courtesy of Kathleen Adams, now of Loyola University of Chicago but previously a professor at Beloit College, my favorite alma mater by far) but it also is the case that the sight of the spider webs often get me thinking not so much that humans are prone to weave tangled webs in order to deceive (to paraphrase a Sir Walter Scott quote) but, instead -- to quote my favorite definition of culture, one made by the great symbolic anthropologist Clifford Geertz -- that "Man is an animal suspended in webs of significance he himself has spun..." (with those webs of significance being culture).

For those who ever wondered (and hadn't previously read this entry I wrote back in this blog's early days), that quote from Geertz's The Interpretation of Cultures (1973), is indeed where I got this blog's name from. And yes, I do think that my choice of blog name does symbolically show that I may have said goodbye to the groves of academe but that I still do often see the world through anthropological eyes. (Something that I trust would make Larry Breitborde, another one of my influential Beloit professors, happy as he did tell us, his students, that his ambition wasn't to produce anthropology professors but, rather, people who could use anthropology -- and for whom anthropology would be of use -- in their life.)

Fantastic and educative post for the theme!! I am ok looking at webs...only! lol

I shall never again see your blog title without thinking of big hairy spiders.

Thanks for reading and appreciating as well as looking. And while I'm glad that you are okay looking at webs, I also encourage you to look at spiders -- because I think they can be beautiful as well as fascinating creatures. :)

Am I right to guess from your comment that you clicked on some of those links to my blog entries with photos of spiders? ;b

Am glad you found this entry to be so. :)

I love the magical creations that are webs! Each unique and each significant! A delightful post!

Love the symbolism in 'webs of significance' - funny how often I visit but never knew that.

Good choice for this week's theme.

Very interesting. I love webs and enjoyed reading about their symbolic power.

Very interesting, and I too think webs are beautiful creations, but I must admit spiders scare me!

Hi YTSL, great photos and an awesome take on the theme. It was so interesting to read your past post about how you came to name your blog Webs of Significance. It is so wonderful to have people come into our lives and have such a significant and life changing influence, positive on us. Thanks so much for sharing. Have a great weekend.

We're having quite a few spider web like you have in your first pictures. In my neck of the woods it seem like after the 20th of August they seem to be on the move.

I run away when I see a little spider ! yikes !

Something else some visitors still don't know: that YTSL are my initials! ;b

Yay, another person with a fondness for webs! :b

Thanks for reading as well as looking. Re spiders: honestly, they don't scare me even 1/100th as much as, say, snakes and wild dogs! ;S

Thanks much for checking not only this post but also the older one I linked to that talked about Clifford Geertz and Ruth Peterson. :)

The 20th of August seems like such a specific date! I'm not sure when the big spiders start going away over here in Hong Kong -- but have to say that I didn't see any last weekend (i.e., the weekend of August 20/21). Hmmmm...

If the spider isn't running towards you, it should be okay! :D

A fascinating post. One of the highlights of late summer/early autumn in the abundance of webs weaved by the garden spider here in England

My favourite spider, the crab spider, only uses silk as a line rather than a web... it is an ambush predator

I loved this post and what a great view point. Happy weekend.

I had no idea they were so symbolic.

I have to admit that I never particularly noticed any real spiders or webs when in England -- only movie ones like "Charlotte's Webs"! If I ever am in England in late summer/early autumn again, I'll try to keep a look out for them though! :)

Thanks and hope you're safe where you are this weekend (with Hurricane Irene and all).

You mean that spiders' webs and my blog name? :O

I'm not a huge fan of spideys but I think their webs are amazingly artistic.

Intriguing and I like how you managed to catch those webs

I think the large spiders to be found in Hong Kong can be really beautiful and there are these smaller spiders found here too who look like they have cute faces! :O

Thanks, I am happy I managed to take the photos I did of the webs too. :)

Thanks for visiting, reading and looking once again. :)

But I do find their webs beautiful and amazing.

I usually only encounter big spiders outdoors and far away from my apartment. I think I might just faint from shock if one of those big spiders I've fairly regularly seen in Hong Kong decide to make my apartment its home too! :O

Thanks for that. And thanks for linking back to your December 2006 for more, much more.

Thanks so much for reading -- and appreciating -- this entry and checking out the one about Clifford Geertz (and Ruth Peterson) that I linked to.