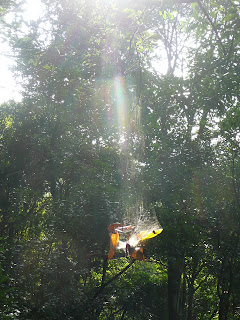 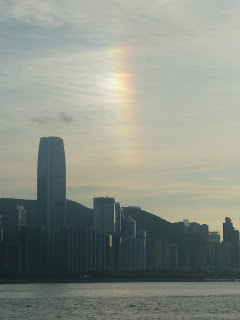 Rainbow in the sky over Hong Kong Island
on -- believe it or not -- a rain-less day!

For the many people who still haven't realized that some three-quarters of Hong Kong is countryside (rather than urban concrete jungle) -- and that forty percent of the Big Lychee's land lies within country parks, it can seem ironic as well as improbable that living in Hong Kong has got me increasingly appreciating nature's offerings (including wild critters such as dragonflies, spiders and skinks). But it really is the case that not since I was at Beloit College in Wisconsin and taking courses in geology and environmental biology to fulfill my science requirements have I been wont to observe and enjoy being out in nature as much as I have since moving to Asia's World City.

Still, it's not been only during this periods of my life that I've been captivated by the sight of rainbows (and associated visual phenomena). And it's true enough that the two rainbow spotting experiences I've considered the most memorable have admittedly not taken place in Hong Kong (or, for that matter, at Beloit). Instead, one of these was at Victoria Falls over on the Zimbabwe-Zambia border (where a rainbow was formed by the spray of the largest and most impressive waterfall I've seen in my life to date) while the other involved my catching sight of beautiful double rainbows while on a bus during my visit to Germany last year.

In the past year, however, I've had two rainbow sightings here in Hong Kong that I reckon are on the special side -- not least because they both occurred on rain-less days. The first of these took place last summer in a wooded area that a friend and I passed through on a hike up to Amah Rock. The second took place on the hot and humid -- but emphatically non-rainy -- day last month that I hiked up Devil's Peak and then down to Lei Yue Mun. More specifically, on my way out of Lei Yue Mun, I happened to glance over across Victoria Harbour and suddenly saw a rainbow in the by-then-not-so-blue late afternoon sky above the Quarry Bay section of Hong Kong Island!

Almost needless to say, I did have my camera with me on both those occasions and thus managed to take shots of the natural phenomena. And while I grant that my treasured snaps pale in comparison to many other rainbow photos on the internet, I still am happy that I managed to take them since it makes it so that I am able to share the sight of those rainbows in this blog entry with other people. :)

Those were awesome rain(less)bow shots!!

And it did not occur to me that HK is a countryside (although I've always been amazed by your countless posts about hiking in HK). Thanks for sharing this :)

I love the second one for the way the brightness of the rainbow contrasts with the grey of the buildings.

Thanks for liking the shots. And yes indeedy re (so) much of Hong Kong being not a concrete jungle -- also, yes, I do often wish more people would realize this! :b

Thanks for liking the second photo. I wish I could do justice to the rainbow I saw -- but that photo will have to suffice as it stands. :)