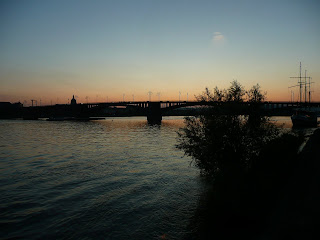 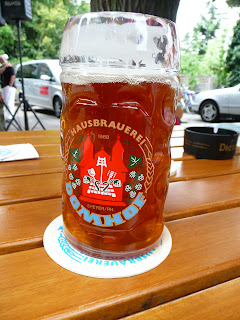 1) Contemporary Germany is a multi-cultural, multi-ethnic place -- replete with such as African fairs, Asian university students and Turkish restaurants and sections as well as olde worlde German biergartens, brauhauses, cathedrals and schlosses.

2) Speaking of beer places: Germany's biergartens and brauhauses are where one can get amazingly fresh and pretty much guaranteed tasty brews!

3) Traditional German food can be delicious, is almost always substantial and appears largely composed of meat, potatoes, bread and pickled vegetables. (And on the subject of substantial: it can take several minutes to chew a single, small piece of German bread!)

4) Even the most famously touristy places (e.g., Heidelberg) as well as cities with UNESCO World Heritage-listed sites can be surprisingly bereft of people, never mind crowds.

5) In at least one German city (i.e., Ludwigshafen), one has to order a bus -- like you would a taxi -- to come pick you up from its main railway station after a certain time in the evenings! :O

6) Many Germans like to bicycle around town and further afield (and there are many bike lanes on the sides of roads and highways specifically given for bicyclists to ride on and along).

7) Germany is a land filled with beautiful cultural and natural sights galore.

8) Quite a number of German religious art works (be they currently ensconced in churches and cathedrals or art museums) can give Mel Gibson's The Passion of the Christ a run for its money in terms of the bloodiness stakes!

9) Unlike in Hong Kong, it's the norm for elevators to not only have a "fourth floor" button but also no "close" door button!

10) German people do have a sense of humor -- and thank goodness my German friend has; otherwise she'd be most upset by certain things I saw in ostensibly serious places like churches and cathedrals causing me to double up and laugh out loud! :D

And for the record: I flew in and out of Germany from Frankfurt airport -- and the towns and cities I visited on this recent vacation were Mannheim, Ludwigshafen, Heidelberg, Hirschhorn, Speyer, Cologne, Schwetzingen, Mainz and Wiesbaden. (So, yes, I think I (with Puppet Ponyo in tow) managed to cover quite a bit of ground over the course of my little-less-than-two-week visit -- thanks in no small part to having a very good German friend taking some time off and showing me around her homeland! :b )

I should probably know the name of the saint or bishop who is holding his severed head a little below where it should be. It is an odd and to me (and also to you if I read it right) funny image although when it was done it must have been a very serious and powerful treatment of a holy man of one branch of Christianity martyred by another.

Without being too sacrilegious it just looks goofy.

You read me right (only in another entry) alright... Have to admit that the sight of the man holding his head caused me to break out into hysterical laughter! This especially after a week or so of seeing some amazingly gruesome religious art and -- it has to be said -- bizarre relics. ;(