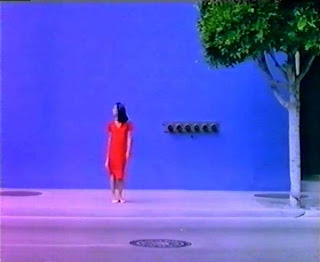 (Continuing from yesterday and the day before that...)

This Hong Kong New Wave offering was one of two films starring Brigitte Lin Ching-Hsia which played during my recent Hong Kong trip. And although she is on record (including in Akiko Tetsuya's The Last Star of the East: Brigitte Lin Ching-Hsia and Her Films) as stating that Li Han-Hsiang's Dream of the Red Chamber (1977) is one of her two most favorite films of all those in which she appeared, I'm personally inclined towards the opinion that this 1981 effort whose screenings weren't officially part of the Hong Kong International Film Festival is the better as well as more interesting work.

The first cinematic production out of Hong Kong to employ an art director (and what an art director he turned out to be in William Cheung Suk Ping!), there's much in this artistic slasher horror that's seriously beautiful to behold. For not only does Brigitte Lin appear "divinely beautiful" and "glorious" like she's touted as being in the Hong Kong Film Archive's program notes but many of the movie's stunning Piet Mondrian- and Mark Rothko-inspired visual compositions also can threaten to take one's breath away.

As I admitted in an earlier post, the experience of viewing my favorite actress on the big screen got me into major fan girl mode and infiltrated my dreams the night after I viewed it. At the same time, something I've also long been able to appreciate about Brigitte Lin is that after you get past her physical beauty, you realize that she's the kind of actress that makes you care about her character and draws you into the movie proper.

Consequently, even while some people can never get past the fact that this work's content pales in contrast to its style, as the film progressed, I got more and more caught up in the proceedings. And so much so that in the last half hour, I was more likely to gasp aloud over certain startling events that had dramatically unfolded on screen rather than in amazement at how physically attractive Brigitte Lin was and how adept Patrick Tam and co. were at milking this state of affairs for all that it was worth!

I wish I got more out of viewing this work which its director announced in a pre-screening talk had been three years in the making as well as described in the HKIFF catalogue as the result of an attempt to "blend the theory of auto-ethnography, urban studies and cultural studies into an interdisciplinary art form". I really do.

After all, I did pay to attend the world premiere of this 74 minute piece that purportedly is a "contemplative portrait of Hong Kong past and present" and all. Alas, however, the truth, plain and simple, is that I think that this is precisely the kind of work that gives film festival and/or independent fare a bad name.

Full of pretension but surely devoid of any real substance, this offering which had been described in entirely misleadingly enticing terms in the HKIFF program folder also has the gall to do such as sow chaos and confusion in the mind of its viewers by way of having two different voices come over each side of the sound system at the same time -- and consequently talk over each other -- and, in another instance, have a voice-over state one thing even while another set of statements appear on screen in print form.

And should anyone wonder, about the only reason why I've not given it a zero rating is because it's the first film I've seen that has shots of a Hong Kong physical feature that I've long thought should appear in a movie: i.e., the super long plus dizzyingly steep escalators of Langham Place in Mongkok!

And then, on the same day as I viewed the dreck of a work which I just described above, I also got to view this gem of a road movie that takes its viewers through scenic landscapes in borderlands which are rarely captured on film. In turns funny, sad, absurd, moving, dream-like and -- above all else -- haunting, this fourth feature film from Kurdish director Basman Ghobadi centers on an aging musician named Mamo who's intent on performing for the first time in over 30 years in Iraqi Kurdistan.

The highly respected patriarch of a family of musicians, Mamo has somehow managed to secure permission for himself and his sons to perform the music he loves at a distant place which he now is taking pains to ensure that they get to. However, he proceeds to significantly complicate matters by insisting on having a woman singer as part of the group despite women having been forbidden to sing solo in front of men in that part of the world and those who had done so in the past having been banished to live in a village of their own far from everybody else.

Initially, Mamo's wishes for such may seem like the stubborn insistence of a senior personage who is too used to having his way. After hearing the woman named Hesho, who he calls his celestial voice, sing though, you'll understand his passion. And after hearing the singing voice of the intriguing character who shares the same name as this enthralling film, you will become even more grateful for the cinematic offering having introduced you to the very existence of these angel-voiced female vocalists and their spine-tinglingly enchanting music.

(To be continued tomorrow...)

Wow, I'd really love to see Love Massacre. I hope it will be availabe on DVD at some point. The visuals sound extremely interesting--how cool to use Rothko and Mondrian for visual composition. (I like the way the screen shot you put up shows some of this, what with the bold colors and straight lines.)

Half Moon sounds great, too.

And as for the second one you describe, well, I'd love to see the escalators....but not at that price. A "1". Hmm. How often do you do give those? Or zeros?

I also hope that this becomes available on DVD very soon. Hopefully, the recent success of After Our Exile will make this more likely to happen.

One of the things I love about Love Massacre is that it's like one of Brigitte's Taiwanese melodramas gone wrong... very wrong!

I forgot to ask: did they talk about the restoration process at the screening?

I wish I could tell you that you can expect to see LOVE MASSACRE on DVD soon but judging from the condition of the print I saw at the Hong Kong Film Archive, this will not be the case.

I'm glad that you got some idea of what I was trying to say from that screen shot. In all honesty, I do think that much of LOVE MASSACRE is very cool to watch -- from an aesthetic standpoint even if nothing else.

And I think that HALF MOON stands a good chance of making it into (American) art-house cinemas at some point and hope you will remember my recommendation when it does.

As for ONE WAY STREET ON A TURNTABLE: Much better to go to Hong Kong to see and ride on those escalators than to subject yourself to a viewing -- even if it were free! -- of that film.

And for the record: This might well have been the very first "1" that I've given (although I've previously given at least one film a 1.5) and I've never given a film a zero rating thus far! ;S

"One of the things I love about Love Massacre is that it's like one of Brigitte's Taiwanese melodramas gone wrong... very wrong!"

What a great description of the film! You're so right about that and that's part of the fun of it -- i.e., seeing a Hong Kong New Wave director (besides Tsui Hark) play around with Brigitte's old screen image, etc.

" I forgot to ask: did they talk about the restoration process at the screening?"

They didn't at the LOVE MASSACRE screening but did at the screening of COLD BLADE (which I'll get to soon!). :b

The lines are a bit blurred in the screen shot you put there, I wonder if the print was like that.

This is a film I'd only want to see because of Brigitte :)

Here's confirming that the print of LOVE MASSACRE that I saw at the HKFA was much less blurred than in the screen shot. Also, that it's a film that most definitely can be enjoyed for the often sizzling as well as outright stunning images of Brigitte alone... :)))))

How did Love Massacre compare with Nomad which was shown last year?

Is Love Massacre one of the films one can request by appointment to view at the HKFA?

"How did Love Massacre compare with Nomad which was shown last year?"

A trio of thoughts that immediately come to mind:

1) If I took Brigitte Lin out of LOVE MASSACRE, NOMAD would be the film with the greater star power and amount of charisma on display.

2) If I took Brigitte Lin out of LOVE MASSACRE, NOMAD would be the film that might appeal to me -- not least because unlike the former, the latter's set in Hong Kong and it seems far more realistic to expect a majority Cantonese dialogue film to be set in Hong Kong (as opposed to the U.S.A. or Malaysia).

3) LOVE MASSACRE's change midway from drama to slasher flick may seem too abrupt to some but I think this works better than the last few unexpected twists and minutes of NOMAD.

"Is Love Massacre one of the films one can request by appointment to view at the HKFA?"

Sorry, I'm not sure about this as it does look to be a very newly restored treasure of theirs!

Thanks for linking once more. :)