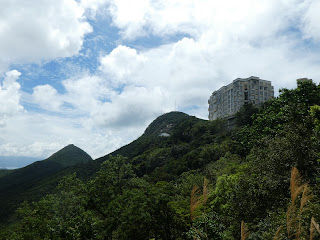 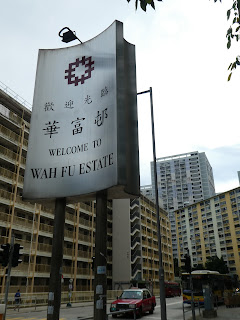 View near the hike's end 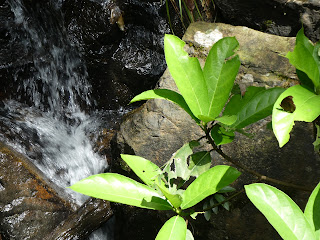 Waterfall, greenery and resting butterfly spotted along the way ;b


To many people who visit, Hong Kong can seem socially and physically homogeneous.  In their eyes, Hong Kong is a concrete jungle full of expensive stores and rich people.  But while it's true that one in seven Hong Kongers is a millionaire (when measured in Hong Kong dollars), the wealth gap between the richest residents of the Big Lychee and the poorest is actually pretty wide indeed; with those living in luxury up on The Peak being several times richer than those living in public housing such as Wah Fu Estate.  And as my hiking posts (of hikes undertaken on Hong Kong Island as well as beyond) often show, the territory actually has plenty of green spaces as well as high density urban ones.


Both Hong Kong's socio-economic and geographic diversity were on view during the hike I went on earlier today with a friend that began up on The Peak (to be more precise, Victoria Gap) and ended several hundred meters lower down -- and several notches down on the social ladder too -- at Wah Fu (more precisely, in the vicinity of Wah Fu Estate).  And while the hike both started and concluded in areas where there were plenty of people in plain sight, much of it actually took place on trails that passed through green areas where far more butterflies (including at least one White Dragontail!) and spiders (including a number of Golden Orb Weavers) were on view than human beings.


For those who think of The Peak more as a major tourist attraction than exclusive residential area: realize that apartments in this exclusive neighborhood can go for several hundred million dollars.  Contrast this with the fact that the maximum monthly income limit for individuals seeking to get into public housing in Hong Kong is HK$11,540 (as of 2018).  Put another way: the combined lifetime incomes of several hundred, if not thousands, of public housing dwellers would still not be enough to buy one flat on The Peak.


Yet while it can feel like the super rich folks living on The Peak and those in public estates may live in different worlds, the fact of the matter is that both groups -- and also those that make up the socio-economic groups in between -- have equal access to Hong Kong's country parks and the hiking trails that criss-cross them.  The beauty of nature and the joys that come from being outdoors on a beautiful day are things that anyone who venture into the likes of Pok Fu Lam Country Park on whose borders can be found both super expensive Peak residences and public housing over at Wah Fu!


As anyone who lives for a time in Hong Kong will realize, hiking is really popular among Hong Kong residents, be they expat or local, female or male, young or old.  Even Hong Kong movie stars get spotted on hiking trails, with one friend having spotted Chow Yun Fat up on Sharp Peak, and another having spotted Carina Lau and Tony Leung Chiu Wai walking along the (Victoria) Peak Circuit!

After photos of Ekin Cheng, Yoyo Mung and Hsu Chi hiking in Tai Tam Country Park surfaced a few years back, a fellow Hong Kong movie fan friend bemoaned her never ever having bumped into them there despite that part of Hong Kong being where she regularly goes hiking.  For my part, I'm not all that surprised that I've yet to spot a movie star while out hiking since I tend to focus on spotting interesting critters (sometimes doing interesting things!) when out in the countryside.  And when I crossed paths with the first Chief Executive of Hong Kong while walking along the Bowen Road Path one Chinese New Year day some years back, it was only several minutes later that I got to realizing who that familiar-looking gentleman was! ;D
Posted by YTSL at 11:59 PM

It seem like there quite a divide doesn't matter where one lives.
Coffee is on

There are quite a few routes for this. Did you go down to the reservoir and then follow Pokfulam Road? Or did you turn south following the Island Trail half way going down hill and use the foot path just a bit past the pavilion and the catch water instead?

I think some places have greater divides than others. Hong Kong's Gini Coefficient has been increasing, not decreasing, over the years, and a 2017 study found Hong Kong to be the city with the second highest income disparity in the world (with New York City being the only city with a greater wealth divide).

I went along the Hong Kong Trail from the Peak. I usually go further along it and end up in Aberdeen but yesterday afternoon, the friend I was with and I decided to check out the short cut down to Wah Fu that we had previously seen but never taken.