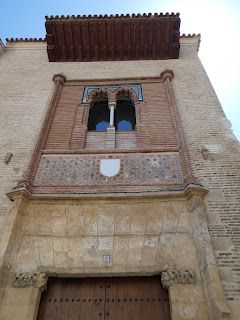 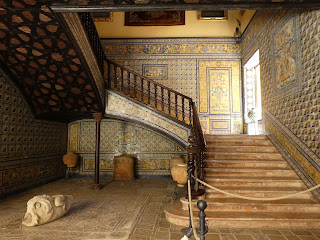 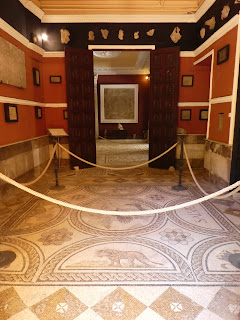 On my final day in Sevilla, I visited two palacio which were very different from Madrid's Palacio Real and didn't really fit my idea of a place that would fit the English definition of palace.  It's not that the Palacio de los Marqueses de la Algaba and the former residence of the Condesa de Lebrija now house museums rather than royalty or noble folk.  Rather, it's that they are smaller in size than the grand buildings which the word "palace" bring to mine and, in fact, come across more like mansions or even townhouses to my mind.

If truth be told, I found the Palacio de los Marqueses de la Algaba (whose visual highlight one doesn't have to go in to see since it's its main doorway) and the Centro de la Interpretación Mudéjar (whose exhibits point to the establishment operating on a rather limited budget) housed within it to be on the underwhelming side.  Maybe I'd be more impressed if it had been the only Mudejar site I had come across on my Spain trip but as it was, I already had spent several hours in the stunning Real Alcazar in the same city.

Still, not all was lost since this turned out to be one of those instances when the journey felt worthwhile even if the destination didn't! Put another way: I actually enjoyed the sights I was treated to on the walk over to this historic site that's situated in a neighborhood located away from the city center and off the beaten tourist path -- which included the eye-catching Metropol Parasol but also streets lined with stores, bars and eateries that catered to locals far more than tourists, and gave me more authentic and cultural interesting views of regular life in Sevilla.

Located closer to the city center (and just a few doors away from the Casa de la Memoria where I had taken in a flamenco performance the previous evening), the Palacio de la Condesa de Lebrija's exterior doesn't stand out all that much from the neighboring buildings but I'm willing to bet that its interior is pretty unique.  Remodelled in the 18th to 20th century and filled to the brim with all sorts of treasures by a noblewoman with a discerning, if eclectic, collector's eye, this 16th century mansion houses Roman mosaics (from nearby Italica), Greco-Roman busts, lots of ceramics (urns, tiles, etc.) and seemingly anything else that caught the Condesa de Lebrija's fancy.

The ground floor contains antiquities galore and feels like an old fashioned museum while a visit to the upper floor will have you feeling like you've gone back into time as well as have stepped into the private quarters of an obviously eccentric as well as rich lady (who was not above doing such as installing an Arab-style sitting room a few doors away from an actual private chapel and the kind of library that will have bibliophiles swooning).  Left as it had been at the time of the Condesa de Lebrija's passing in 1938, the Palacio de la Condesa de Lebrija contains a lot of character thanks in no small part to a woman who really does come across as quite the character as well as collector.

More than incidentally, my visit to it was made all the more enjoyable by it not appearing to have been a place that has been "discovered" by many visitors to the city.  To those who opt to follow in my footsteps: be sure to pay the extra fee for entry (via a guided tour) to the upper floor rather than just be content to restrict yourself spending time in the ground floor, which is chockful of antiquities but actually is less colorful than the section of the palacio where photography is sadly not allowed.
Posted by YTSL at 11:17 PM