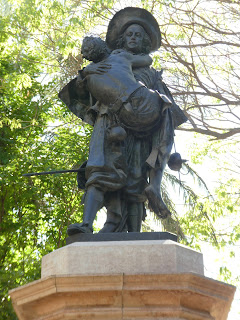 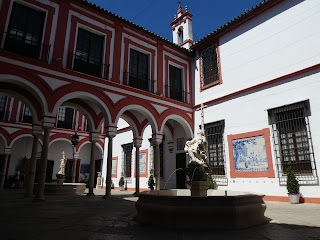 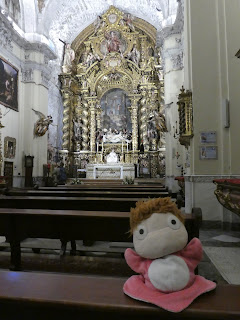 
It's close to a month since I flew out of Spain -- and in that time, I've flown out of and back into Hong Kong once more (on this occasion, to enjoy durian season in Penang).  Many of the memories I accumulated over the course of my fortnight or so in Spain remain pretty vivid though, and the fact that this is the case even for visits to venues that could be described as "minor" (or, at least, not "must see"s in the eyes of many) attests to these sites actually having been much to offer and recommend.


Take, for example, the charity hospital that my guidebook (written by Rick Steves) had listed as a "try hard to see" but my German friend's hadn't seemed to rate that highly.  Founded in the 17th century by a playboy nobleman turned altruistic human being, the Hospice and Hospital of the Holy Charity in Sevilla (aka the Hospital de la Caridad) is in operation to this day (albeit more as a charity home for the aged than an actual hospital) and is housed in buildings considered to be among the finest examples of Baroque architecture in Sevilla, if not the whole of Spain.


Located in a quiet section of the city center that's just a few minutes walk from the city's famous cathedral but can feel a world apart in terms of tourist traffic, the Hospital de la Caridad houses both elderly patients and works of art by Spanish masters such as Francisco de Zurbaran and hometown boy, Bartolomé Esteban Murillo.  The bulk of the institution's artistic treasures line the walls of its richly decorated chapel (whose size as well as furnishings put many a church I've been in to shame) but, at the time of my visit, visitors were able to view up close two Murillo masterpieces which had been newly restored and were being housed in another section of the hospital complex.


While there's no question that its chapel is its architectural highpoint, the central courtyards of the Hospital de la Caridad also are aesthetically pleasing -- particularly, like it was for the bulk of my visit to the complex, when it was largely empty and consequently peaceful.  (When a large tour group entered the space during the latter part of my visit, it was rather shocking to see the quiet so dramatically shattered!)


Even my having to share it with other folks couldn't take away my appreciation of the chapel however.  On the far end from the entrance is an eye-catchingly large wooden altarpiece that has been covered with glittery gold leaf and on the upper walls and ceilings of the chapel are intricate stucco work.  The art that made the most impression on me, however, were two paintings near the chapel's entrance: one showing how life can be extinguished in the blink of an eye (Juan de Valdés Leal's In Ictu Oculi); and another depicting the hand of Christ holding the scales of justice, and also worms and bugs feasting on the decaying flesh of a bishop and  Don Miguel Mañara (Sic Transit Gloria Mundi, also by Leal)!

From one perspective, it stands to reason that there would be meditations on death and what comes after in the chapel of a hospital, hospice and/or home for the aged.  But talk about putting the fear of God -- more precisely, being judged to have committed more sins than good deeds by God! -- into those who enter and make use of that place of worship, particularly those who do so regularly for a significant period of time! :O
Posted by YTSL at 11:59 PM

Funny I had a similar experience visiting a Spanish hospital that is slightly off the beaten track but I thoroughly enjoyed. Yours was baroque while mine was art nouveau. Any guesses? Haha ...

Would it be Barcelona's Hospital de la Santa Creu i Sant Pau by any chance??