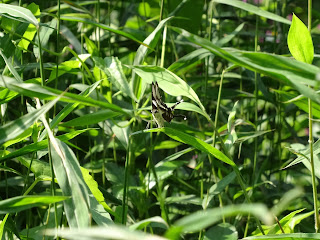 Not the usual picture of one of Hong Kong's rarest butterflies 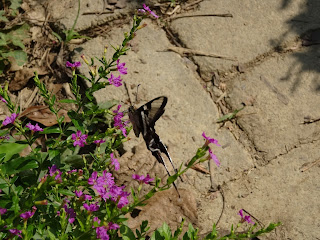 A more recognizable view of the white dragontail


Since last Saturday, we've had beautiful weather in Hong Kong.  While I wouldn't go so far as to say as it's definitely autumnal (since I've yet to feel a need to get out the sweaters and down vests from storage), I think the signs are finally very clearly pointing to summer having called it quits for the year.  And although I was able to go butterfly spotting at Fung Yuen Butterfly Reserve in December last year, I figured that this week might be a good time to go for my annual visit to this nature facility whose existence I treasure far more than my annual visits there can make it seem.


Unlike on my previous visits, this time I went to Fung Yuen with a friend who I figured would also be able to appreciate the place.  And I was proved right when minutes after stepping on to the 42 hectare site, she voiced out loud how wondrous and precious is this place where nature is allowed to flourish (and which hasn't (yet) been turned into a site where high rise apartments are to be found, unlike the neighboring area that's now home to the controversial Mont Vert).


Adding to the wonder of it all was that this happened even before a white dragontail proceeded to casually fly past us.  Amusingly, no sooner had I told her that this butterfly -- which happens to be the world's smallest Papilionidae (swallowtail butterfly) -- was very rare (and one of Fung Yuen's "stars") that a couple other members of the very same species flitted -- in their distinctively erratic as well as fast-paced pattern of flight which stems from their ability to fly backwards as well as forwards -- into the area!


All told, I reckon that I spotted the white dragontail around 10 separate occasions in the hour or so that I was at Fung Yuen this time around!  At one point, I actually saw one of those butterflies come to rest on a long leaf -- or was it the top section of a large blade of grass?  In any case, I know that I was witnessing a rare event, and consequently felt privileged to have been able to capture it with my camera!


Even more amazingly, another of Fung Yuen's "stars:, the uncommon -- despite its name -- Common birdwing (Troides helena), also revealed itself to us a few times over the course of this visit.  For the record, this constituted the first time(s) ever that I had caught sight of this rare large butterfly whose golden yellow hindwings looked super shiny and absolutely breathtakingly beautiful in bright sunlight.  (In the case of this papillon, however, I've yet to successfully document my sightings with a photograph -- and would be super chuffed if were to do so at some point in the future.)

With over 200 -- and maybe even close to 300 -- species of butterflies documented as having made their home in Hong Kong, it's small wonder that I'm still make sightings of many species of butterflies for the first time more than nine years after moving to the Big Lychee and having become a major fan of the natural part of "Asia's World City".  At the same time though, I get the distinct feeling that if I were to visit Fung Yuen more often, I'd more quickly come across a considerably wider range of butterfly species than I've already felt very lucky to have been able to spot and be able to recognize. ;b
Posted by YTSL at 11:59 PM

Haven't seen a butterfly in while. But have seen quite a few spiders, mostly "Daddy Long Legs" and it is sure becoming sweater weather. So glad not to yet be wearing my winter coat.
Coffee is on

I saw a (very large) spider at Fung Yuen too -- and also birds, lizards, etc. But the "star" butterfly spottings were definitely the visual highlight of the afternoon. :)

It's always a pleasure to read your nature blogs, especially one like this of a butterfly reserve, which might not be as well known as other sights.

Right now, when Hong Kong's politics can make me really depressed, I try to take comfort in Hong Kong's nature -- among other things, its showing time and time again that it's actually far more resilient than people often have given it credit for being.