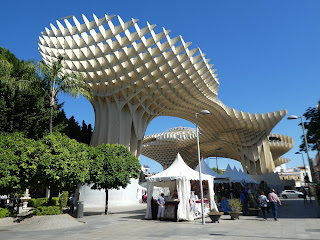 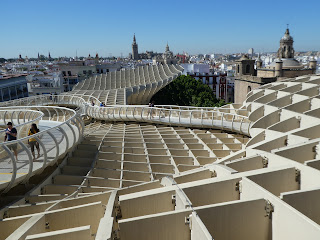 In any event, the Metropol Parasol is what the structure's called! 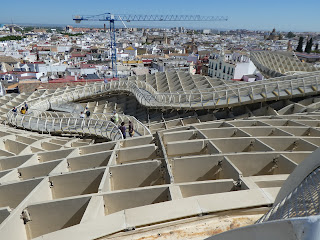 And if nothing else, I think its existence -- and the views from up it --
helps emphasize that Sevilla is not a museum but a living city :)
I spent a lot of time in old buildings over the course of my Spain visit last month.  I figure this is to be expected since this once major world power's Golden Age is considered to have begun in the last decade of the 15th century and been over decades before the 17th century drew to a close.  But while its glory days are long past, the fact of the matter is that Spain is a still evolving nation with a society and culture that remains very much alive rather than living museum that exists solely for the edification of tourists and historians.
Still, it's true enough that many visitors to Spain (like myself) spend far more time in the historic sections of its cities than those parts of the cities and country where more modern (and even post-modern) styles of architecture abound.  So it came as a bit of a shock to the senses when, on our way to visit a museum housed in an old palace on our final full day in Sevilla (the city that's (also) home to such as a UNESCO World Heritage-listed Gothic cathedral and centuries old Real Alcazar), my German friend and I stumbled across a giant, alien-looking structure that looked more like it had come from the future than was a vestige of the past!
The brainchild of a Berlin-based German architect who decided to shift his middle initial to the back of his name, the Metropol Parasol opened for business in March 2011.  Standing in space that previously served as a car park and conceived as an attempt to revitalize the formerly nondescript Plaza de la Encarnación, this tall and large wooden structure which brings to mind mushrooms, sponges and waffles (as much as -- if not more so than -- parasols) houses a farmer's market, shops, bars, restaurants, and archaeology museum.
From its roof-top terrace and walkway that winds and undulates like a rollercoaster track, one can enjoy panoramic views of the city that take in both its newer and older parts -- and my German friend and I did so; in the process, spending quite a bit of time up there on top of the Metropol Parasol.  If we had known that it happens to be held together by polyurethane (foam seal or, more simply, glue) though, I'm not sure if we would have done so for as long as we did -- or been so relaxed while up there!
It's been reported that the local folks still don't know quite what to make of the Metropol Parasol and whether they like it or not.  In addition, I don't get the impression that it's considered to be a major tourist attraction in a city that's not exactly lacking major historical sites and sights.  For my part, however, I am glad that it's part of my Sevilla experience and memories.  If nothing else, I reckon that it's a pretty unique structure whose existence bears testimony to the city's authorities not being inclined to just dwell on past glories and the glorious past.
Posted by YTSL at 11:59 PM