Diverse wildlife which caught the eye along a quiet section of the Hong Kong Trail :) 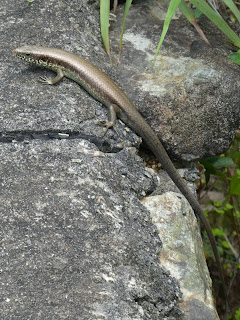 One of five different skinks spotted while out hiking today! 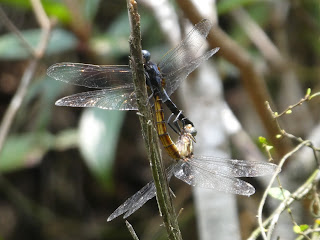 The first pair of randy bugs seen going at it on the same hike ;b 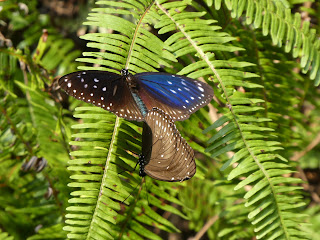 Different insects, similar inclinations
now that it's that time of the year! :D
If you told me before today's hike that I'd be snapping as many photos during it as I ended up doing, I'd have been very much surprised.  For one thing, I've previously been on Stage 7 of the Hong Kong Trail a few times before this afternoon.  For another, the trail is scenic enough but still not as spectacularly so as, say, the Nei Lak Shan Country Trail or Section 3 of the Maclehose Trail (be it its first half or second).

Then there was the fact of today not being a particularly high visibility day (though it was markedly less dark, gray and wet than yesterday, where not only did it rain quite heavily but the storm clouds that gathered in the morning made 9am, 10am, 11am and even noon look more like night than day).  And last but not least is it having been so that on previous hikes in the area, I hadn't come across all that many wild creatures, never mind particularly eye-catching (acting) ones as was the case this afternoon!
It wasn't just that the friend I was with and I spotted many colorful varieties of butterflies and dragonflies on today's hike.  Instead, we also spotted five different skinks within just a few hours; the most since the Tai Po Kau hike I went on with another friend close to six years back where we actually spotted more than 10 of these cool looking creatures -- and, unlike today, different species of this interesting reptile which can visually resemble a snake with legs too!
Normally, those skink spottings would be the highlight of a hike.  But this afternoon, I also came across not just one but two pairs of insects doing what comes naturally to many animals at this time of the year.  And what's even more unusual was that both the dragonflies and butterflies in questions were flying about in midair when joined together as well as inclined to take up more regular and stationary positions on a twig or atop some leaves!

Another unexpected action on the part of one of the mating butterflies was that as it went about its business, it'd also occasionally open its wings for a second or two.  Indeed, if memory serves me right, that's the first time I've seen that happen -- and, well, I've seen quite a few pairs of randy butterflies (and, for that matter, moths too) while out hiking in Hong Kong!

More than incidentally, today's outing was my final one with the friend who has been my regular weekday hiking buddy for the past couple of years or so as she's headed back to the US on Monday.  Over the years, I've made a number of good friends and cemented solid friendships while hiking in Hong Kong; and I hope that, like three good friends and fellow hikers who left Hong Kong before her (to return to Singapore, Canada and Germany, respectively), we'll meet -- and maybe even go hiking -- again some time in the future; and if not in Hong Kong, then somewhere else in this world that sometimes can feel way too big but at other times can feel pretty small indeed.
Posted by YTSL at 10:37 PM

AND dragonflies too! ;b