Not always feeling at ease in Sevilla's famous cathedral :S 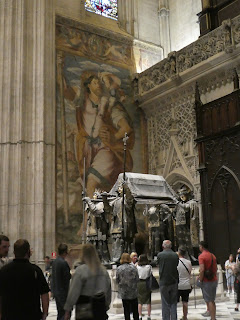 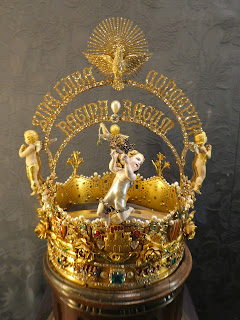 This cathedral also houses Spain's most valuable crown,
whose centerpiece is the world's largest pearl 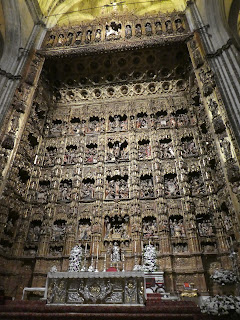 Just one look at its High Altar will get you realizing
that it's quite the treasure too! 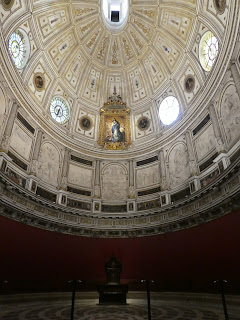 And it's Chapter House may well be the most
beautiful in the world! :O
Sevilla's Catedral de Santa Maria de la Sede has many claims to fame.  One of three structures in the Andalucian city (along with the Real Alcazar and the nearby Archivo de Indias) which is UNESCO World Heritage-listed, it took some 100 years to build and its total area of 23,500 square meters makes it the third largest church in Europe (after St Peter's in Rome, and London's St Paul's Cathedral) and the largest Gothic church in the world.  Kings, princes and cardinals are buried in it.  And so too is the Italian explorer largely funded by Spanish monarchs, Christopher Columbus, "who sailed the ocean blue" to what he thought was India but turned out to be the Americas.
Even if you didn't know who he was or that he's buried in Sevilla's cathedral, you'd be able to figure that Christopher Columbus' tomb is a big deal since it's pretty much always surrounded by crowds of people from various parts of the world. Another section of this vast building where the crowds -- understandably -- gather in front of is its High Altar, where the largest altarpiece ever made can be found, albeit behind metal grills that the church administrators in Spain seem to erect far more than their equivalents in many other parts of the world.

I have to be honest: often, Sevilla Cathedral felt far more like a tourist attraction than an actual place of worship to me.  One reason is because of the large amount of people there who weren't there to pray.  Another is that the place is chockful of treasures, works of art (including by Goya, Murillo and Zurbaran), and -- my apologies in advance if I offend sensitive religious souls -- some rather bizarre and discomfiting oddities.
Many years ago, I read a book about Christian relics in which it was mentioned that there are a number of churches in Europe that claim to be in possession of Jesus Christ's foreskin.  (Incidentally, it was through looking up that word in a dictionary that I came to find out what it meant!)  And while Sevilla Cathedral is not one of those Christian places of worship that have made that claim, its treasury does contain hundreds of what are claimed to be saintly body parts along with gold and jewel encrusted items, including the Corona de la Virgen de los Reyes, whose creator, Manuel de laTorres, made use of the world's largest pearl for the torso of the angel at the center of this precious crown!
In retrospect, I should have known to brace myself to behold some pretty unusual sights when the first part of the cathedral proper that I entered (which has been set aside as its art pavilion) turned out to house a 17th century piece of sculpture made to resemble the severed head of St John the Baptist.  Oh, and near an exit hangs El Lagarto, a stuffed crocodile gifted by an Egyptian Sultan to Spain's King Alfonso X when the former sought to wed the daughter of the latter!
Far more pleasing to my eye was the cathedral's Chapter House, where the archbishop and his council would meet to consider matters.  Its magnificent domed ceiling and marbled patterned floor makes it an aesthetic wonder.  At the same time as I was admiring its beauty, however, I found myself thinking it highly likely that some pretty unsavory decisions got made in the room, and perhaps that what accounts for my feeling literally chilled while in there...
More specifically, as I had learnt at Cordoba's Casa de Sefarad, Sevilla was where the Spanish Inqusition got its start, with the first ever auto-da-fé of the Spanish Inquisition, which led to the burning alive of six individuals, being held in that city whose famous Jewish Quarter now no longer is home to any Jews.  And while the seat of the Inquisition was across the river in Triana, a Sevillan archbishop, Pedro Gonzalez de Mendoza, is considered to be the true founder of the Spanish Inquisition -- and the chances are indeed high that he made a number of decisions in his seat's chapter house... :S
Posted by YTSL at 11:59 PM

I'm at awe with large Cathedral but the cost of building and up keep. One could help lot of those in need.
Coffee is on

I agree that large cathedrals cost a lost to build and maintain and much of that money could be better spent on charity and such. So I am not a fan of building large new cathedrals or churches. For the centuries old ones: they're already there and often very beautiful -- and I often don't mind paying an admission fee to help with their upkeep if called upon to do so, as was the case in Sevilla.