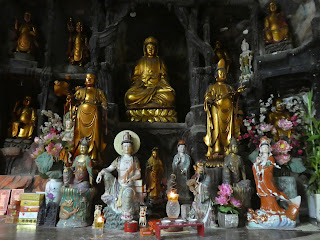 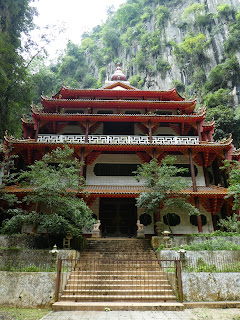 Venture deep into the cave and you'll find an opening, nearby
which you'll see this intriguing looking temple building :b
I've flown to Ipoh a number of times in my life and have even taken a train from Butterworth over to the state capital of Perak.  For the most part, however, I've travelled to Ipoh by car -- and, irregardless of whether we're arriving there from the north or south, know that we're near our destination upon spotting the visually striking limestone hills that surround the town.
Something else that I've long known is that within many of those limestone hills can be found cave temples -- with the most famous of them all being Sam Poh Tong, situated on the southern edge of town in a limestone hill known as Gunung Rapat.  And the Cave of Triple Gems (which is what its name translates into English from the Cantonese spoken by the majority ethnic group in the area) was where my party headed over to after lunching in town on my most recent roadtrip to Perak.
After lingering for a bit in the ornamental garden in front of the main cave entrance, we ventured into what actually is a pretty sizable cave that's been home for more than a century now to a Buddhist temple established by a monk from China who was passing through Ipoh.  Inside the organic space that's ever-growing and -changing, as evidenced by the drip, drip sound of water flowing down stalactites and enlarging them along with creating new stalagmites, we found a profusion of religious figures and figurines arranged on altars, in natural alcoves and such.
Having read that Sam Poh Tong had an upper level from where excellent views of Ipoh and the surrounding area could be had, I felt letdown upon learning that access doesn't seem to be allowed anymore up to that part of the temple.  On the other hand, I was happily surprised to discover that the cave goes far deeper inside the hill than I had thought would be the case -- and that one of the passageways in the temple leads into an open air area within Gunung Rapat itself that's completely encircled by towering cliffs, where an interesting building, interesting statuary and a pond-filled with tortoise are to be found!
Approximately one and half years before our Ipoh trip, my German friend and I had visited a Chinese Buddhist temple in Amsterdam. Although the He Hua Temple is supposed to be Europe's largest Buddhist temple, it is completely dwarfed by Sam Poh Tong.  Still, it's not Sam Poh Tong's size that is its most visually impressive facet but, rather, its location within a cave.  It may not be a venue that normally springs to mind when thinking of where a temple is to be housed -- but it does appear that the founder of Sam Poh Tong really did make an inspired choice with regards to its location! :)
Posted by YTSL at 11:50 PM