Reflections on nighttime in Yogyakarta, and my general Indonesian experiences 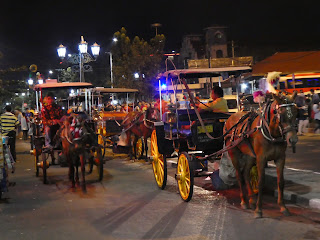 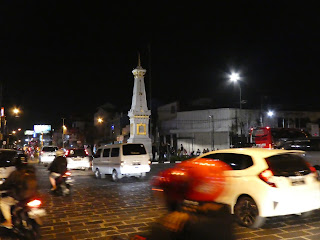 Night-time road traffic in the vicinity of Tugu Jogja


"Where are all the people?", I remember asking my German friend when I visited several towns and cities in her home country (including Hirschhorn and Speyer) and found their streets unexpectedly bereft of people.  In contrast, on the first couple of nights that she and I spent in Yogyakarta, we both were shocked by the large crowds we encountered on the sidewalks as well as the heavy traffic on the road.  Indeed, I'd go so far as to admit that the sheer amount of people on the pavements and streets was actually intimidating even to someone who's become very used to dealing with teeming crowds after having lived more than ten years now in super high-density Hong Kong!

In retrospect, I think my fearfulness stemmed in part to my being in an unfamiliar city rather than just the teeming crowds themselves.  Things also weren't helped by the outdoor lighting in Indonesia being nowhere near as bright as what I've become used to here in Hong Kong, where the light pollution has been found to be the worst on the planet.  In addition, huge swathes of the sidewalks in Yogyakarta were uneven and sometimes potholed to the point that I did fear at times that I'd trip and fall, and injure myself, over the course of my weaving around people and navigating our way around town.


In any event, I felt more comfortable walking about in the city the second night that I was there than the previous night.  And on our final night in Yogyakarta, walking about at night turned out to be really enjoyable -- what with there being a nice breeze about that hadn't been there before, and also there being way fewer people out and about.


So vast was the size difference in the crowds that my German friend and I were as taken aback by it as we had been by the size of the crowd that we had encountered on our first night in the city -- at least until we got to realizing that our first two nights in Yogyakarta had been weekend nights while our third and final night there was a Monday night!  At the same time, it's all relative, as the proverbial "they" say.  For here's pointing out that the photos at the top of this blog post were taken on the "quiet" night!

For the record: I really did feel so intimidated those first couple of nights that I didn't feel comfortable taking out my camera and taking photos -- and amidst a whole bunch -- of perfect strangers.  But just as my pre-trip apprehensions about Indonesia (including those stemming from news reports that got me worrying that the whole country was a hotbed of conservative Islam and that racism would rear its ugly, sometimes very violent, head once more there) were dispelled by the interactions I had with various Indonesian people (include whole hordes of students at Borobudur!), so too did my night-time apprehensions end up melting away and I ended up having a pretty good time in an incredibly cultural heritage-rich country I now will definitely consider revisiting before too long. :)
Posted by YTSL at 11:34 PM