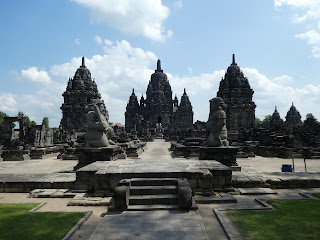 Not a movie set but a bonafide ancient temple! 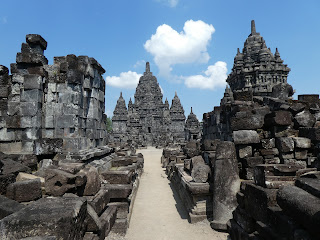 I could easily imagine this central Javanese site
figuring in an Indiana Jones type movie though... 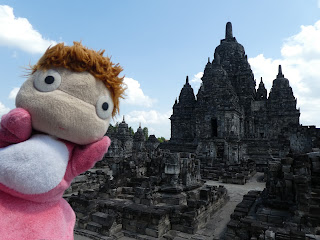 This also is the kind of setting which called for
Puppet Ponyo to be captured by the camera in! ;b 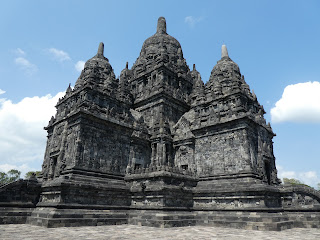 More seriously though, Candi Sewu's main building is one of those
structures that are impressive from whichever angle you viewed it :)

Pretty much whenever one reads or hears about Prambanan, the UNESCO World Heritage-listed site is described as being a Hindu monument.  But within this ancient temple compound -- and, actually, counted as part of the temple complex -- lie Buddhist temples (as is the case with the nearby Candi Plaosan, only on an even grander scale); with the largest and northernmost of these being that known as Candi Sewu.

In its heyday, the Sewu temple complex was said to have been home to 249 buildings.  But that was 13 centuries ago -- and since that time, Candi Sewu has been witness to the fall of the kingdom whose rulers built it and also has been buried by ash from one major volcanic eruption and severely damaged from at least one major earthquake.  Furthermore, it's suffered from looting over the years by both Dutch colonists and local villagers, with a not a single head left on the Buddha statues found within the compound.

However, when compared to the two other Buddhist temples (Lumbung and Bubrah) located between Candi Sewu and Prambanan's main courtyard (where such as the Hindu temples dedicated to Shiva, Brahma and Vishnu are located), there's much to see -- and be impressed by -- still at Candi Sewu.  For example, whichever side of the temple complex that one approaches from, one will be met with the sight of a large pair of striking-looking Dwarapala (armed door or gate guardians), each carved from a single block of stone.

Also, even while Candi Sewu's main temple would be dwarfed by the 47-meter-high Candi Shiva over at the main Prambanan compound, it's still no slouch at 30 meters in height -- especially when one considers that its considerable age.  In addition, a walk around this ancient structure (as well as along the walled outer corridor of its high platform) truly helps to emphasize how incredible is this cross-shaped 20-sided polygon architectural plus archaeological gem.

All in all, Candi Sewu's probably my favorite of the temples I visited on the Prambanan Plain.  To be sure, Candi Sambisari was a good place to start, Candi Sari provided balance (as the only non-temple I visited that day), and my initial sightings of atmospheric Candi Plaosan and the majestically tall temples in Prambanan's main courtyard will stay in my memory for a long time.

But my visit to Candi Sewu truly felt special and magical -- in no small part due to my having been able to enjoy being at this expansive complex in what felt like amazing solitude since so very few people looked to have decided that it'd be worth the bother to walk some 800 extra meters to it from the main Prambanan compound!  Probably not since I visited Great Zimbabwe some two decades ago now did I feel like an intrepid explorer (not just traveller), and so very blessed to be able to have the space as well as time to take in wondrous sights in an atmosphere of such blessed peace and quiet! :)
Posted by YTSL at 11:24 PM

Alas, all my Great Zimbabwe photos are in my family home in Penang! But I do have a few photos from my time in Tanzania that I plan to share on this blog at some point in the not too distant future. Interested? ;b

Judging from these memorable photos of a temple complex I was previously unfamiliar with, I can't imagine why Candi Sewu is "often overlooked." Even with the looting, I'm sure it would still be impressive to visit. This is one of the temple entries I've seen on your site and judging from Puppet Ponyo's proud traveler's pose, I think she agrees that Candi Sewu is something special.

Sure! Safari I presume?

I think the main reason why Candi Sewu is often overlooked is that most people who go to Prambanan visit with a tour group and have a limited amount of time to spend in the temple grounds -- which they spend for the most part in the main Prambanan compound. Consequently, those who do take the trouble to Candi Sewu are rewarded with peace and quiet as well as some really breathtaking sights. :)

Whoa! I'd like to see your perspective of Tanzania as a local!

I've occasionally blogged about my Tanzanian experiences over the years. The following post is one you might enjoy reading:-
http://webs-of-significance.blogspot.hk/2007/02/small-world.html

Just wish to say your article is as astounding. The clarity in your post is
simply excellent and i could suppose you are a professional on this subject.
Fine together with your permission let me to clutch your feed to
stay updated with imminent post. Thanks 1,000,000
and please keep up the rewarding work.

Thanks for your input and you're very welcome in wanting to stay updated with this blog. Every once in a while, I take a hiatus for about a week. But rest assured that I intend to continue blogging for some time to come. :)