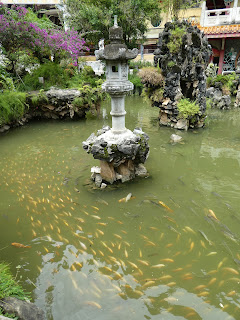 Fish getting ready for a feeding frenzy that never was! 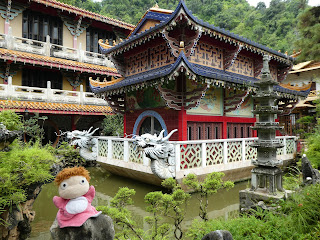 Puppet Ponyo posing with something in the garden of Sam Poh Tong
that called to mind the Summer Palace's Marble Boat ;b 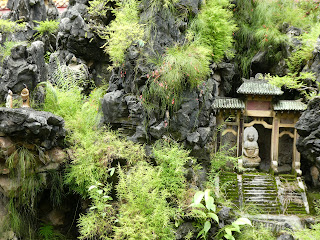 A landscape in the Sam Poh Tong garden that's
far smaller in reality than it looks in the picture!
If it had been up to my mother, our excursion to Ipoh would have pretty much only involved eating and buying food stuffs (such as Tambun pomelos and whole baked chickens) for friends and to take back home to eat later.  As it was though, she was kind enough to accede to my German friend's and my request to do some sightseeing in between the tea as well as lunch and dinner that we had on our day trip to Perak's capital last month; with the famous cave temple of Sam Poh Tong being the attraction decided upon to head over to after the first of our three meals in Ipoh.
My mother tells me that she and my father had taken me to visit this Chinese Buddhist temple built into a limestone cave when I was a child.  However, I have no recollection of that which is the oldest and most famous of Perak's cave temples -- and certainly did not know that in its grounds is situated that which was named the best landscaped garden in Malaysia in 1993.

If truth be told, that green ornamental space in question is looking rather neglected and somewhat the worse for wear these days.  Also, it's on the small size and therefore could not be considered worth checking out in and of itself.  And yet, when I look at the photos I took of and in it, I get to thinking that this garden still does have its charms.

At the very least, whoever conceived and designed it certainly is not lacking in imagination.  And while the fish in its pond and also the colorful structure that surely was inspired by the more plainly colored Marble Boat that's found in the Summer Palace in Beijing may be more eye-catching, the section of the garden which actually impressed me the most was a miniature landscape which, at least in the photo I took of it, looks very much to scale and really like a little bit of China can be found in what actually is Malaysia! :)
Posted by YTSL at 11:16 PM

Again your entries show that sights within or nearby to Ipoh are well worth visiting. Puppet Ponyo looks quite pleased that you took her along on this daytrip. I like the bottom photo best - the kind of microcosmic rock world that I would travel out of my way to see.

Visiting Ipoh this time around with my German friend was interesting as it made me see familiar places in a new light and also gave me the incentive to check out attractions I hadn't been to (at least not as an adult). As for Puppet Ponyo: I think she enjoys being near bodies of water, however small. At the same time, I was a bit afraid she'd plunge into that murky pond and was so relieved when she didn't do so! ;)