Specialty dishes worth travelling all the way to Ipoh for! ;b 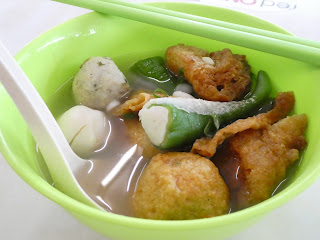 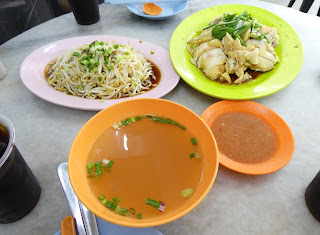 The well nigh unbeatable combination of Ipoh bean sprouts,
poached chicken, clear soup and spicy sauce :b
Just because my Indonesian sojourn was over didn't mean that I wouldn't be travelling any more for a time.  For after my German friend and I got back to Penang from Yogyakarta and rested a bit,  we -- together with my mother and another person -- headed out for a daytrip to Ipoh, which a CNN travel piece that had come out just a couple of days earlier had touted as "Malaysia's rising tourism star".
The capital of Perak state is not all that far away from Penang but it can feel like a foreign place for Penangites on account of the main Chinese dialect spoken there being Cantonese (rather than Penang Hokkien) and the food it's famous for accordingly differing quite a bit (even while being pretty delicious!).  A case in point: after we got into town, the first order of business was to go have lunch; and at the coffee shop that was our first -- but far from last -- eating stop of the day, I had to make a mental adjustment and get to ordering my food in Cantonese (which I had last used while in Hong Kong) rather than any of the languages I had been using recently in Penang as well as Indonesia!

While my mother introduced my German friend to her favorite Ipoh dish (known as Ipoh hor fun), I opted for a bowl of Ipoh yong tao foo.  This Hakka dish's name literally translates into English as "stuffed bean curd" but it -- at least, the variants I've eaten in Malaysia -- is so much more than that.  Resembling the delicious Hong Kong street snack whose name translates into English as "three stuffed treasures", fried foods comprising such as eggplant (aubergine), green peppers and sausages stuffed with fish paste, the way to go is to order an assortment and eat them doused in sweet hoisin sauce, chilli sauce, or both!

But whereas the Hong Kong "treasures" tend to be eaten as a snack on the fly, at stands with no seats in sight, Ipoh (and, for that matter, Ampang) yong tau foo are eaten sitting down and substantial enough to make for a solid meal.  In addition, there are boiled rather than just deep fried items in the selection which -- and this is where Ipoh yong tau foo differs from Ampang yong tau foo as well as Hong Kong's "three stuffed treasures" -- are served in a clear soup.
Much as I enjoyed my Ipoh lunch however, the meal I really was looking forward to was dinner: which, at my request, was at an eatery specializing in bean sprout chicken.  It may not sound like much but trust me when I tell you that its poached chicken component tastes absolutely fantastically juicy and the dish's star ingredient are the biggest bean sprouts you'll ever see and is far juicier as well as crunchier than any beansprout you'll have ever tasted -- unless you have the famous Ipoh bean sprouts in Ipoh!
And yes, I realize it may sound crazy to wax so lyrical about bean sprouts.  But, in all honesty, the peppery bean sprout component of Ipoh's signature dish is soooo good that I often think that I'd be thoroughly happy to just make a meal out of a plate of rice topped with a generous pile of Ipoh bean sprouts and bathed in the eatery's complimentary clear soup -- that is, until I eat a piece of that poached chicken and find myself automatically reaching out to eat a second, third, fourth, etc. piece of it! ;b
Posted by YTSL at 11:59 PM

On my last trip to Malaysia I was traveling by bus from Penang towards the Cameron Highlands. I was thinking of stopping in Ipoh
to see the Buddhist caves outside of town, the offshore karst formations and because it is Michelle Yeoh's birthplace. But I changed my mind the last minute and didn't stop in Ipoh. I've regretted that decision ever since...Well, after reading this food entry of yours, I've learned that the food is good and motivates me to see Ipoh on a future trip.

If you ever make your way to Ipoh, be sure to have the bean sprout chicken. Also highly recommended are the pomeloes (grown in nearby Tambun) that can be bought there. I grew up eating these very sweet fruit and was shocked to discover in Hong Kong that many other pomeloes actually taste sour rather than sweet!