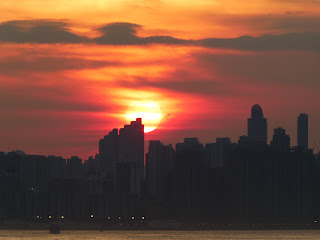 Every so often, nature and humans combine
to create a beautiful sight 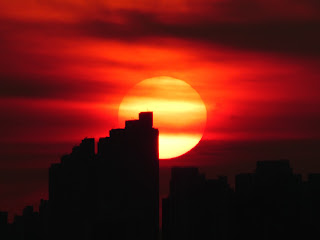 No photo-shopping was involved -- honest! 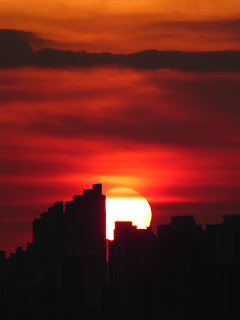 Instead, what really helped was
my camera having a 30X optical zoom :) 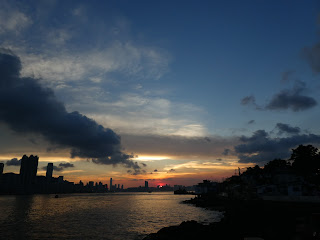 A photo taken with far less zooming ;b

This past week has seen the Hong Kong Observatory posting "very hot weather" warnings for a number of consecutive days and my finally succumbing for the first time this calendar year to having the air conditioning on more often than off when I've been in my apartment.  Then early yesterday, came news that slightly cooler weather would be on the way next week -- but so too would lots of rain and Hong Kong's first typhoon of the year.

Consequently, rather than stay in air-conditioned comfort indoors all of today, I decided to venture out for a meetup.com group excursion this afternoon that was billed as a hike but, really, was more of an easy ramble on entirely paved paths from Tiu Keng Leng MTR station to Lei Yue Mun and Sam Ka Tsuen via the Junk Bay Chinese Permanent Cemetery.  And finding out that visibility today was at the 45 kilometer mark over at Sai Wan Ho (just on the opposite side of Victoria Harbour from where we would be this evening) made me look forward all the more to taking advantage of the day's fine -- even if hot -- weather!

At Lei Yue Mun, the group spent some time exploring the area near the abandoned quarry which lies under the shadow of Devil's Peak -- where, the last time I visited, I saw a hobbyist having fun flying his drone.  After leaving it, we found that we were just in time to join the sizable number of photographers who had parked themselves in the vicinity of the area's Tin Hau Temple to snap shots of the sun setting way out west.

Just a little over two months ago, I had taken some sunset photos I felt pretty good about over at Kennedy Town's Western District Public Cargo Working Area.  But I actually think that the snaps I got this evening are actually better -- with the sun not only looking big and clear in the pictures but also combining with the surrounding clouds to give a more vivid impression and bathe the area by the horizon in a spectacularly warm orangey-red glow!

Here's the thing though: while it was orangey-red there in the west, out east, we were actually bathed in cool blues that same time!  Don't believe me?  Then, go back to the top of this blog post, and compare and contrast the view found in the fourth photo from the top with the three others! ;b
Posted by YTSL at 11:45 PM

I don't know if you're still using your Lumix (called the VS60 here in the US), but these are "spectacular" sunset photos, and reasonably sharp. Did you steady your camera with some available form of support?

Yep, I'm still using the Lumix I only just bought last December. I didn't have a tripod with me that evening but I did balance the camera on a railing. I guess that counts as some form of support, right? ;)