On the same day that I visited Candi Sambisari, (Vihara) Sari and Candi Plaosan, I also spent time at Prambanan.  Although part of me worried that I'd suffer from "temple fatigue" the way I had on a visit to temple- and shrine-rich Kyoto a few years back.  But any doubts that I'd feel underwhelmed by this Yogyakarta-area UNESCO World Heritage-listed site that's often overshadowed in reputation by the considerably better known Borobudur quickly got dispelled when I set my eyes on what the official government brochure describes as "the tallest and most beautiful Hindu temple in the world".

Between the 8th century and 10th century AD, some 240 temples were built within the grounds of Prambanan.  Over the years, some of them have fallen into ruin -- and as recently as 2006, these temple compounds suffered extensive damage as a result of a magnitude 6.4 earthquake.  But enough remains to leave this visitor feeling awe-struck, and also feeling so very fortunate to have been able to visit the place: whose soaring spires tower over the rest of the landscape and leave one feeling very small indeed; and whose stonework gets one marvelling at how amazingly skilled and able its architects and builders -- who lived so very long ago -- were... 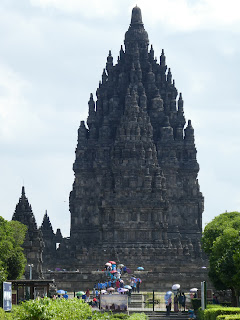 Dedicated to Shiva, the tallest of Prambanan's temples
soars up to 47 meters (around 144 feet) in height 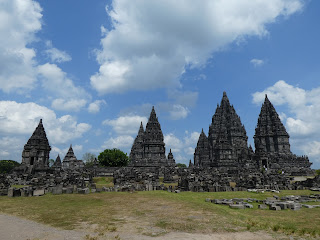 The existence of just a single towering temple is amazing enough
but there's more than one of them to be found at Prambanan! 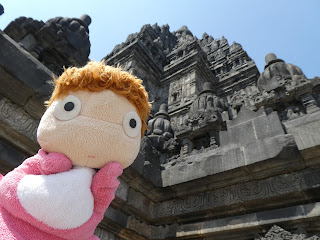 Puppet Ponyo also wants it to be known how

elaborately decorated these soaring structures are! 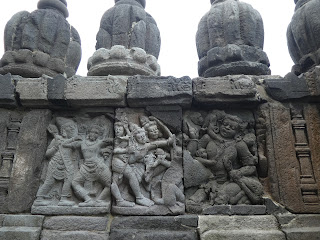 Like at Borobudur, the detailed sculptural reliefs
on the temple walls inspire awe along with the
monumental size and nature of the buildings themselves 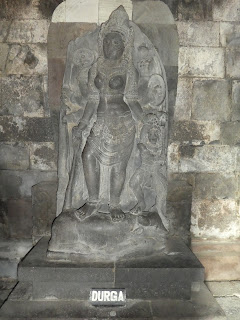 In Prambanan's Candi Shiva Mahadeva is a statue of the god's
consort, Durga, which is thought to have been modelled after
the real life queen whose husband began the Prambanan complex 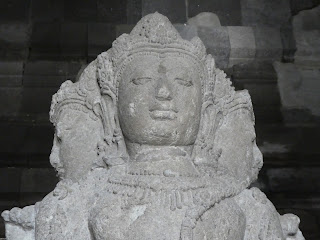 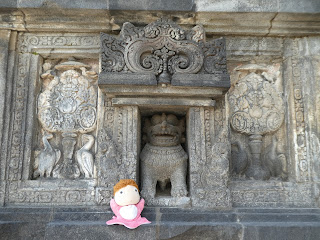 Puppet Ponyo looking sufficiently awestruck by it all! 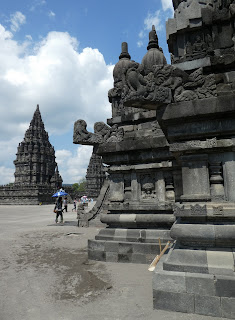 Truly, these are the kind of buildings that make you feel that
you're in the realm of gods when walking amongst them :)
Posted by YTSL at 11:59 PM

Whoa ... you visited how many places in about a week?

It depends on how you count it. My conservative estimate would be three: Borobodur (including its two subsidiary temples, which are within walking distance of the main structure), Yogyakarta, and the Prambanan Plain (which, as I think you've noticed, is super rich in ancient monuments)! :b