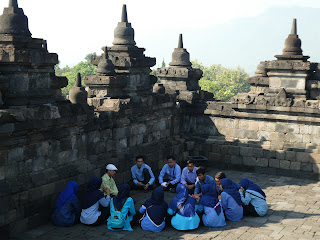 Students and their teacher at Borobudur 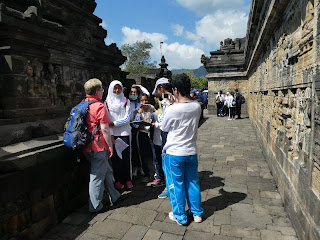 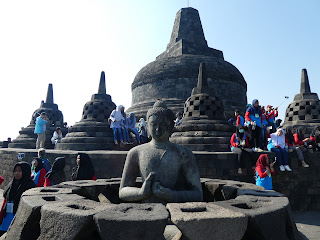 A noticeably mainly Indonesian, Muslim and female
crowd at the largest Buddhist structure in the world!


"You'd think there'd be more foreign tourists here."  This was an observation made early on during our visit to Borobudur made by my German friend and both her and my views on this situation remained unchanged after spending several hours over three days at this amazing ancient monument.


For although we certainly did see hundreds, if not thousands, of visitors to this UNESCO World Heritage-listed site, the vast majority of them appeared to be Indonesian nationals: and, in particular, local Indonesian students.  Additionally, while a smattering of the young people did appear to have been brought to Borobudur to view and learn about this 9th century Buddhist temple, the vast majority of them appeared to have been brought there by their school teachers to practice English by interviewing foreign visitors to the site!


On our first day in the area, as my German friend and I walked around slowly admiring the vast monument, she saw a group of youngsters waving at us.  After she waved back, they ran towards us, screaming requests to interview us.  Little did we know that we would be approached by an untold number of student groups requesting the same over the next few days!


"What is your name?  Where are you from?  What do you think of Indonesia?  Have you tried any Indonesian food and if so, which ones?"  These were some of the questions we'd get asked if we agreed to be interviewed by groups of frequently smiling -- and also often rather shy -- students who usually appointed one of their members (almost invariably a girl if it was a coed group) to do the talking while another recorded our conversation, sometimes using pen and paper, and other times on video.


After a time, I got to realizing that if I walked a few meters in front of or behind my German friend, I could "pass" for an Indonesian and therefore avoid the gauntlet of student interviewers.  We both also found that if we gazed intently at the relief sculptures on the walls, the uniformly well-mannered (as well as soft-spoken) students would also politely leave us be: which really was a relief (no pun intended!) as, truly, there were so many of them!  Put it this way: on the one hand, it was interesting to talk with the schoolchildren; but, on the other, we really were there to check out Borobudur -- and there were times when it felt like we were losing the opportunity to really be able to behold and appreciate it undisturbed!


More than incidentally: from the headcoverings worn by many of the females, we could surmize that the vast majority of the Indonesian visitors -- both students and adults -- were of the Muslim faith.  On one level, this is to be expected since the majority of Indonesians are Muslim.  On another, it was rather surprising and also gratifying to see them having few, if any, qualms about visiting what is, after all, a Buddhist site.


The sense I got was that the locals see Borobudur, above all, as an Indonesian national treasure rather than, say, the largest Buddhist structure in the world.  Also, in their part of the world, Islam is indisputably and securely the dominant religion -- with it being perfectly normal to hear the muezzin's call to prayer five times a day, and to have these calls being broadcast far and wide -- and, consequently, coming through loudly and clearly even while one is at a Buddhist temple that dominates the physical landscape.

Thus it is that while my visual memories of Borobudur do primarily involve Buddhist imagery, my aural recollections of it will include Muslim calls to prayer being heard from time to time along with the excited chatter of happy schoolchildren.  It's not what I expected to encounter at the largest Buddhist temple in the world but, upon reflection, it makes sense since this amazing site happens to be in the largest Muslim-majority country in the world (in terms of population size).
Posted by YTSL at 11:28 PM