The monument-rich Prambanan Plain's Sari: A vihara rather than candi? 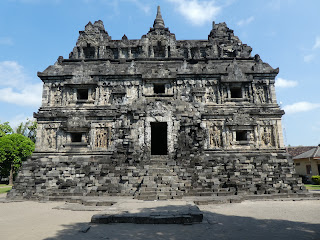 One more ancient central Javanese sacred structure --
this one dating back to the 8th century and Buddhist :b 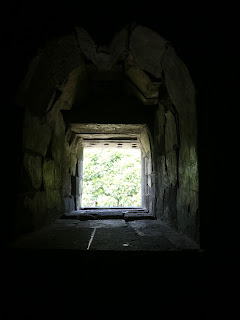 A view from within that gives a good idea
how thick the structures walls are! 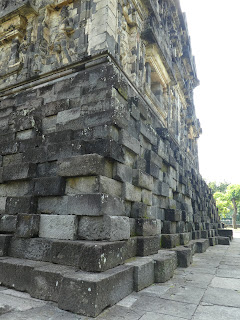 Does the building's base look secure and sturdy to you?
Pretty much every ancient religious structure that my German friend and I checked out in Indonesia had the word candi as part of its name.  Think about it: thus far, I've devoted blog posts to Candi Pawon, Candi Mendut and Candi Sambisari.  And for the record: the Indonesians actually do refer to their country's -- and, in fact, the world's -- largest Buddhist monument as Candi Borobudur.
For some reason, until this recent Indonesian trip, I thought the word "candi" referred only to Hindu temples but in the week or so that I was in the country, I learnt that it's applied to ancient Buddhist as well Hindu stone buildings.  Actually, candi refers specifically those stone buildings used for worship, or where the ashes of cremated Hindu kings and Buddhist grandees are stored.  However, I know of -- and did visit -- at least one Javanese candi that's so called but may actually be a vihara instead.

Located not too far away from Candi Sambisari and stylistically part of the same group of ancient monuments as it (and Prambanan), that which is known as Candi Sari actually predates those structures and differs from them in being Buddhist rather than Hindu.  Situated around 200 meters from Candi Kalasan (which I saw from the road but didn't visit, because it's considered to be in poorer condition than the other ancient structures located on the volcanic and archeaologically as well as biologically rich Prambanan Plain, and less well maintained too), this 8th century structure is postulated to have been to house sleeping quarters for the monks who served at Candi Kalasan or went there on a pilgrimage.

Soaring some 17 meters high, Candi Sari was a two-storey structure but is currently missing the wooden beams that divided up the interior space and served as the base for the upper floor.  One therefore has to use one's imagination to imagine how it was in ancient times.  Still, one thing was clear when we visited: that the inside of this stone building is not only considerably darker than the outside (during the day) but also is noticeably cooler too.

Most overwhelmingly, however, as was the case also at Candi Mendut, one had the fearful sense that this ancient structure wasn't the most stable out there -- and absolutely was not one which people would want to be in during an earthquake.  And what with central Java having had its share of tremors and major geological movements, the truth of the matter is that neither my German friend nor I were inclined to linger for long inside this more than 1,200-year-old monument that we preferred to be awed by from outside and maybe even a distance! ;)
Posted by YTSL at 10:53 PM

First photo looked a little spooky to me...Coffee is on

Maybe if the weather had been more gloomy that day, I'd have felt that way. But as it was, I found Candi Sari more interesting than spooky/scary! ;)