Back on New Year's Eve, 2015, I spent time at the Tropenmuseum in Amsterdam.  While certain of its exhibits impressed me, I must admit to having been taken aback, appalled even, upon seeing items such as the head of a Buddha statue from Borobudur in its collection.

Among other things, I tend to think that such religious objects which had been meant to be permanently installed at temples and such belong at the original sites for which they were created.  Also, I had this vision of Borobudur, one of those UNESCO World Heritage-listed sites which I had long wanted to visit, turning out to be much less than I had previously imagined as a result of such as colonial plunder along with physical degradation over the years.

Still, even while I did try to keep my expectations about this ancient monument realistic, I must admit that I made a point to book my German friend and I into a hotel located within this central Javanese attraction's grounds for two nights because I figured that we would want ample time to explore and appreciate the place.  And so it proved because -- there's really no two ways about it -- Borobudur is absolutely awesome; and I can but hope that the following photo-essay helps to show that it is so:-

Borobudur's sheer size and scale is hard to convey, even in
a panoramic photo (which you can click on to enlarge) 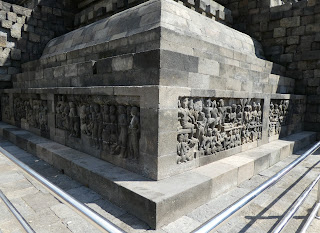 After its construction in the 9th century AD, it was decided to encase
Borobudur's base so that some 160 sculptural reliefs such as the above
(which are the only sections since uncovered) were hidden to the world! 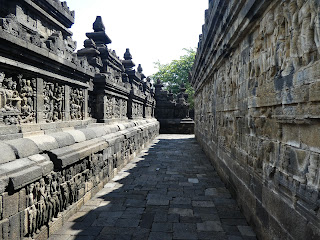 This would have come across as a far greater tragedy if not for
many hundreds of meters of Borobudur's other similarly
intricately decorated walls having escaped that fate... 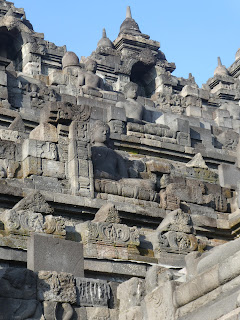 Not to be forgotten, of course, are the Buddha statues at what
is, in fact, the largest Buddhist monument in the world! 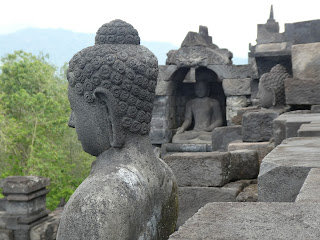 There are 432 niches, many of them still containing Buddha statues,
on five of the nine floors (or platforms, as they are often called)
of what is shaped like a giant Buddhist mandala if viewed from above 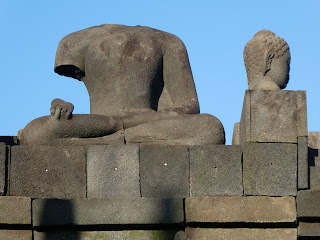 Even when incomplete, the Buddha statues have a beauty about them 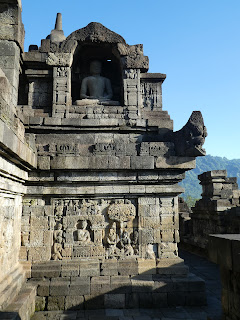 Every corner one turns at Borobudur, one sees
so much that is beautiful and wonderful :) 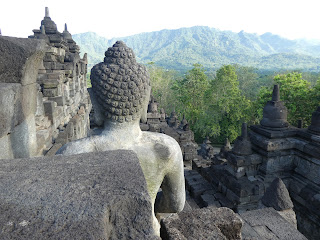 And if you can tear your eyes away from Borobudur itself, you'll find
the surrounding scenery pretty awesome too -- as this monument's located
on an elevated plain between two volcanoes and a rugged Menoreh Hills :)
Posted by YTSL at 11:25 PM

Wow this IS impressive, especially in the shadow of a fearsome active volcano. How many days did you spend in Java in total?

It IS, isn't it? All in all, I spent six days in Java -- with two nights in Borobudur and three nights in Yogyakarta (from where I went for the day to another amazing UNESCO World Heritage-listed site. Just you see the pics of that!).