The distinctive experience of eating at a nasi campur stall :) 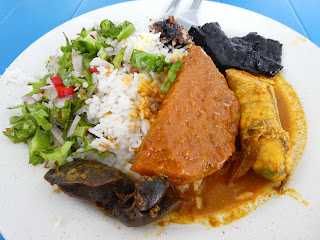 What I had for lunch at my favorite nasi campur place in Penang... 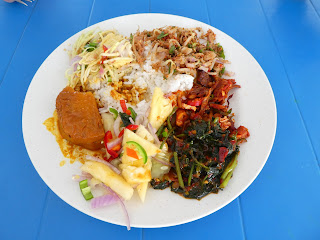 ...and what my German friend chose to have at the same place ;b


For two years of my life, I lived in Kuala Lumpur: to be precise, the section of the city outskirts known as Bukit Jalil.  Like another city I spent time in (this time, Philadelphia, over in the US), my best memories of the place often revolve around food; with probably my favorite eatery there being a nasi campur stall in neighboring Kinrara which had the largest "toppings" -- as well as plenty delicious! -- selection that I've seen at a any nasi campur place to date.


It may not have as wide a selection as the eatery in Kinrara but after moving back to Penang as an adult, I was introduced to another nasi campur joint in Tanjung Tokong that I absolutely must eat at whenever I'm back in town.  And on my most recent return to Penang last month, I introduced my German friend to what's definitely up there among my favorite places to eat in the food capital of Malaysia.


Seeing things through her eyes, I got to realizing that the way things are done at a nasi campur place really can bemuse first timers.  First up is how unfamiliar and even exotic many of the food selections are for those new to all kinds of Malaysian food (which is many non-Malaysians, since Malaysian food isn't as easily found outside the country as, say, Chinese or Italian food is outside of their home territories).  Then there's the "free and easy" buffet style approach to selecting and getting one's food, which nonetheless begins with your getting a plate of rice from the person who also frequently figures out how much you have to pay and gets the money from you.


On this particular visit, however, the individual in question was too busy ladling out rice to also act as cashier.  So we were told to eat first before someone would come over to our table to calculate how much our bill would be -- and adding to my German friend's bemusement was the stall staff taking his sweet time to come over to our table so that we could settle the bill!


Looking at my German friend's selection, it was clear that she had focused on the vegetarian options.  Something that worried me a bit was that her selection (which included two types of pineapple options, a mango salad and a spicy dish whose main ingredient was morning glory), looked on the distinctly spicy side but she actually turned out to be much less fazed by the generous amounts of red chillies and shallots on her plate than I thought would be the case!

For my part, I went for an omnivorous selection that included a winged bean salad and a slice of curried pineapple (whose mere mention has caused me to salivate in a Pavlovian manner!) but also portions of fish roe, cow lung and other innards that I have to honestly say that I can't actually give a name to but can recognize, and know that I like eating!  And yes, as improbable as it sounds, I think all of these selections go well together -- and with the rice that is essential to this meal, as it's not for nought, after all, that nasi campur translates from Bahasa Malaysia to English as "rice mix"! ;b
Posted by YTSL at 6:16 PM