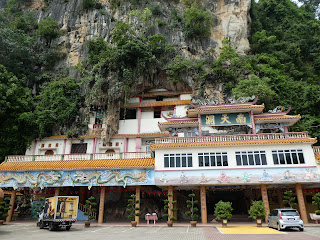 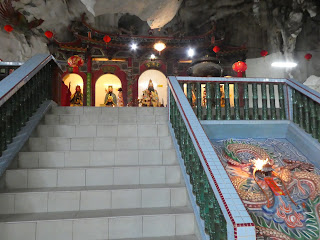 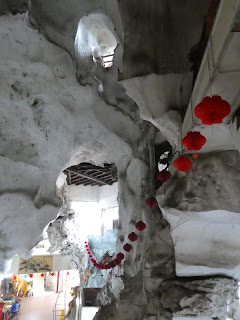 Built into a very large cave is a multi-leveled temple 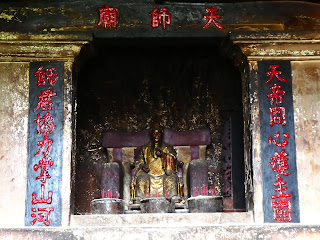 
I have to be honest: I was a bit disappointed with what I found over at Sam Poh Tong.  Yes, its landscaped garden had its charm but it also looked on the rundown side.  And after having braced myself to climb several meters up inside of it to get amazing views of the surrounding countryside, it was rather a let down to not be able to find a way up to the upper tiers of the temple (with my companions and I speculating that it was because certain sections of the temple had become unstable in recent years, or at least dangerous to move around because of there being so much water dripping down in the cave).


In contrast, my expectations were on the low side with regards to the cave temple located next to Sam Poh Tong, which hadn't been mentioned in any guidebook belonging to my German friend or myself, and doesn't have such as its own Wikipedia entry.  Indeed, the only reason why we decided to check out Nam Thean Tong was because a stranger that one of my party had been chatting with at Sam Poh Tong told us that the neighboring temple actually contained more interesting things to see -- and, as I went on to discover, she was absolutely right!


According to an information panel found at the site, Nam Thean Tong was established in 1867 by a Chinese priest named Kuong San Teik.  While the temple doesn't look that old at first glance, if you were to venture inside and then climb a couple of hundred steep steps up to its highest section, you will find yourself in a part of the temple which one can easily believe is on the old side and that, frankly, also felt rather spooky; thanks in part to that space being on the dark side and few people deciding to make the climb up there -- with half of my party declining to do so! -- but also because the antique figurines there got me thinking of corpses for some reason!


While Googling for information on Nam Thean Tong, I came across a blogger who claims to have caught sight of a ghost there!  So it most definitely isn't just me who feels that there's something haunted -- as well as haunting -- about the place.  Nonetheless, on balance, I actually enjoyed visiting this less well known temple to the much more hyped-up Sam Poh Tong.  If nothing else, you could say that it definitely had more atmosphere -- especially the further up the temple and cave one ascended!

To sum it up: if you don't want to climb up too many steps, Sam Poh Tong would be the place to go.  But if you're up for ascending a number of stairs, even if some of them are on the noticeably old and rickety side, then make for Nam Thean Tong.  Or, if you're interested and energetic enough, go for both -- and more, since there actually are not just one or two but many cave temples in the Ipoh area! ;b
Posted by YTSL at 11:00 PM

Honestly I hadn't really thought of Ipoh as a tourist destination before (beansprout chicken was the only thing I knew). But this looks really impressive! Probably worth an overnight between KL and Penang?

Have you seen my Perak Tong entry yet? I think that's the most impressive of the Ipoh cave temples I visited! And yes, I reckon that Ipoh's worth at least an overnight stop between KL and Penang.

Another Perak town that might be of interest to you is the royal town of Kuala Kangsar. We actually spent some time there that day too. If you drive (or can hire a car and driver), it's easy enough to get to from Ipoh!

Yes I've seen your pics of Perak Tong, and yes it does look even more photogenic. The Ubudiah Mosque looks nice too, though I'm probably most curious about the chicken and white coffee!

The beansprouts are the best part of the beansprout chicken dish -- honestly. And I generally love Malaysian kopitiam coffee rather than that which is specific to Ipoh. Still, if any of those things -- along with my posts of Ipoh's cave temples -- make you want to visit Ipoh, that's fine by me. :)